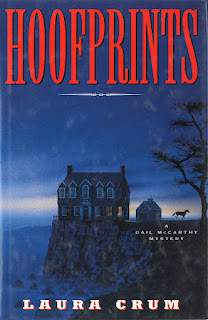 If you’d like to hear more adventures from my past life training horses, there are many woven into “Hoofprints,” the second book in my mystery series. Hoofprints is on special right now as a Kindle edition. Only 99 cents. Here is the link, if you’re interested.

I have seen the abuse too. The trainer that just left our barn used to literally tie the horses noses down to their knees for days. They would wonder around the arena or round pen for hours unable to get any relief. It was heart wrenching.

horsegenes--It soured me for life on that part of the horse biz. I know not everyone is abusive, but so many trainers were (by my standards). It was just not worth it to me to participate in that world with those people.

Having never really been into competing or serious training, I have only heard of some of the harsh things people do to "train" their horses. I am just getting started in trying to teach my paint horse to compete in Ranch Horse Competition's. There is just no amount of money or prestige in the world that could get me to try something like that on my guy. (or any horse) As it is, he doesn't tolerate being treated or ridden harshly at all. The kid I got him from said he got dumped in the dirt all the time, after seeing the kid ride I know why. If someone rode me like that I'd dump them too. :)

Cindy D-- I admire your stance. If you interact much with reined cowhorse trainers in your quest to show in Ranch Horse competition, you are likely to run into some of the same abusive methods both horsegenes and I mention. Don't assume that because someone seems "nice" that they don't use these methods. Unfortunately, these abuses are pretty common in the trade. Glad you enjoyed Cutter. Any reviews you would be moved to post on Amazon or Goodreads would be very much appreciated.

What a sad story. You have alluded to witnessing abuse by trainers, and now we know exactly what you mean. UGH. I'm glad the poor filly survived her impalement, and also that YOU were not injured.

I just bought Gunner a handful of Senior Feed, as I purchased "Hoofprints" just now. Looking forward to reading it and all the rest of Gail's adventures! :-) (I already have Going Gone, and Cutter)

I forgot to say, how extremely cool that you got to see the Queen! What a bizarre thing to happen by the side of the road in California while sitting on a horse... I'm sure she was tickled as could be that she saw you three, too.

I knew someone who was spectating at a 3-day event as a child and when she stepped backwards trod upon someone's toes. There was a polite, "Oh, excuse me!" in a British accent, and this girl realized she had just attempted to cripple the Monarch herself. Talk about embarrassing... :-)

Thank you RiderWriter--Hope you enjoy Hoofprints. The real trainer featured in my blog post plays a role in Hoofprints, though he is given a different name and a different life story. But I'll bet you can recognize him.

RiderWriter--Well, we hoped the queen would enjoy seeing some "cowboys." Who knows? Maybe she does remember us just as I remember seeing her wave--but I doubt it. She's seen a great many things in her life, after all.

well obviously even though you were so young, you knew (and cared) a helluvalot more than that trainer. too bad there are so many of those in all horse sports. you wish you do unto them like they do unto horses, so they know just what it feels like!!
oh, but YAY on the Queen!
- The Equestrian Vagabond

Merri--Yeah, I feel pretty hostile to all those trainers I knew who were so hard on horses. Some of them won a lot and were big shots in the business. And I didn't even get into the buting lame horses to make them work and then dumping them when they just couldn't go any more aspect. But hey, the queen did wave at me. I've never forgotten that moment. Silly, but true.

How absolutely terrifying. I'm so glad neither you nor the horse were killed. I was cringing reading this... start to finish.

Dom--Well, you can see why I rather quickly decided that the reined cowhorse biz wasn't for me. I also really got fed up with the callous attitude of most of the professional horse trainers I knew. It was a rough business much of the time.

It amazes me how brain washed young people are as far as obeying authority. I had the same sort of experiences that, looking back, I can only shake my head and be grateful that now I could tell the jerks where to go and walk away. I can only hope that parents now are teaching their kids independent thinking so these things will no longer happen.

Good point, Susan. I know my son is far more able to sort out what he thinks about something and be clear about it than I was at his age. The difference between a home-schooled kid and a girl brought up in Catholic school, I think. I was taught a healthy respect for authority from a young age and independent thinking was actively discouraged. I had to learn to be independent as an adult. Though I have tried to teach my son to be polite and respectful, I also support him in being clear about what he does and doesn't like--and I think this will serve him well in life.

You make me think of my Californian ex-wife who would attach a standing martingale to the curb chain of a wire-wound bit "because it taught the horse to give respect". I didn't stand up to her as much as I might, mainly because she could be frightening when roused. There again what can horses expect when the humans are just a few generations removed from enslaving fellow humans and wreaking genocide?

Gee, WHP--I hope I don't remind you too much of harsh training methods...Its true that I have seen a lot of harsh stuff done, and the story I told in the post is quite true, but when the decisions were mine to make, I have always erred on the side of caution and kindness. That said, I do believe a horse must respect the human handler, but I have never found it necessary to use a standing martingale in the way you describe. Ouch. That is truly harsh.

Hell of a position to be put in.
And the Queen?! Lucky you, once in a life time deal there.

Love all your books :)