Further Adventures of a Hermit 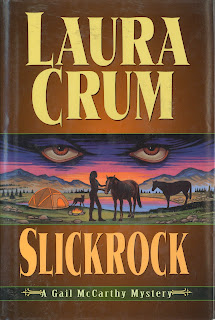 For those who are wondering what in the world this post has to do with horses, it is a postscript to a fairly long (twelve post) saga I wrote about my life with horses. That saga begins here. And many of the insights and observations I made in my journals during my time at Burgson Lake found their way into my fifth book, Slickrock. This book is based mostly on the horse packing trips I did in my thirties, but much of the writing about solitude in the mountains comes from my early journals at Burgson Lake. Click on the title to find the Kindle edition of this book (which is just $2.99).

That darned mortality thing is a bummer. I lost another friend a week ago, the second one this year. I was never a big party person, I've always had just a handful of very close friends, now 2 are gone. I'm not moving to the woods though, surviving alone in your twenties is one thing, at 60 it's got to be very scary.

redhorse--I wouldn't wish to do what I did then now, either. In my 20's it was a grand adventure. Now, I would find it overwhelming. Being a hermit here on my small horse property is far more appealing.

So sorry to hear about your friend.

I don't know that I could do it alone. I'm brave as hell, but that would probably be the line. Mike and I could go do it together though...

Dom--Yeah, I was brave as hell, too, in my 20's. I SO did not expect to be scared. But I was. It would be a total blast doing it with a boyfriend. But not the same experience. Still, not to say a better or worse experience. Just different. It would surely be less scary. And probably much more fun.

I was wondering about that - I certainly would have been nervous as a woman by myself in the wilderness, even in my 20s - maybe particularly in my 20s.

Kate--I never imagined it beforehand, but my fear was definitely about men. Bears made me a little nervous, rattlesnakes also, but I could handle that fear. Strange, possibly dangerous men, however, became my bogeyman. I have no idea how realistic this fear was; I only know what I experienced, which I have written down in the post, pretty much exactly as it happened.

*LOL* "no need to drown" - that is awesome. i love this story! if only i could share this with my colleague - we've been talking about gun laws in germany (haha) vs america. the fact that you just went and borrowed a gun - germans cannot grasp that concept.

what i find odd about the story is you had a dog but you didn't see the dog as your protector. but then, i guess he was a puppy?

since i'm scared at night on my own property (boars are the only dangerous thing here really), i cannot imagine having the guts to be completely alone and stranded.

a game i used to play in the woods: my friend and i would split up and see how far we could walk alone into the darkness before chickening out and coming back. it's actually really fun: )

now you've got me thinking about pitching a tent on my property and sleeping out there with the animals. ok i'm gonna go look for the tent!

lytha--Well, I'm pretty sure it wasn't technically "legal" for me to borrow the gun, but I didn't care much about that, given the circumstances. My boyfriend gave me a lesson shooting tin cans in his backyard (this was a very rural county) and that was that. I never once fired the gun while I was living at the lake.

As for Joey, my dog, yes, he was a puppy. I did not see him as protection, rather as something I had to protect. He would growl and bark at noises in the night, which only made things worse, actually. I would just be more convinced something dire was out there.

Have fun camping in your tent! I have "camped" on my own property many times and I think its very special to wake up and see the horses munching in the moonlight.

Great post and fun comments! Your story made me think back to my 20s.

I went alone to Norway when the friend I was supposed to go with got engaged instead. Technically, I was never alone since I stayed at hostels, but I was definitely alone among strangers. And yes, like your experience, it taught me a lot!

Alison--My husband's coming of age experience was traveling through Europe for a year all alone. In some ways I envy both him and you. I loved being in Europe as an adult--it would have been so exciting to be their on my own in my 20's.

I could never camp by myself like that either now or when I was in my 20's. I wouldn''t mind camping with my husband though and horses. I absolutely loved your book Slickrock. Made me want to go on a pack ride.

Thanks, 14.1 hands. I'm so glad that you enjoyed Slickrock.

Many people told me at the time (and later) that they could never do what I did. I think we're all different. I wouldn't want to do it now, so I recognize that feeling. I did want to do it then. But I felt (then and now) that I could never live in a big city, which very many people take for granted. It would both terrify me and overwhelm me to live in a city, and if I had to choose, right now today, I would go back to the lake alone over the city (I honestly believe the lake would actually be safer). But anyway, we all have our stuff, and our strengths and weaknesses. I'm pretty good at being alone. But as i said in the post, that degree of solitude and isolation was very different (and more scary) than I had imagined.