Meet Gayle Carline - and a Contest!

Hi everyone! Today we have a guest post from a regular reader, author and horsewoman Gayle Carline. Besides being a humor and mystery author, Gayle is also a Quarter Horse owner who shows as an AQHA Novice Amateur. She also has a brand new book out, told from her horse's point-of-view, called "From the Horse's Mouth: One Lucky Memoir."

I thought it would be interesting to see how she captured those equine thoughts on the page, and she talks about the process here. Be sure and read to the end, where she announces a contest with an awesome prize for one of our readers.

Best of all - Gayle may soon be blogging with us regularly - so with that said: 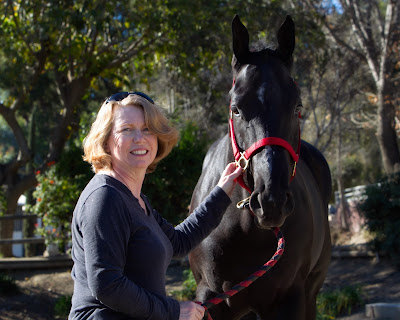 First of all, I’d like to thank Linda and all the members of Equestrian Ink for having me over to the blog. (Can I call you Inkettes?) I’ve been reading this blog for years, and really enjoy everyone’s posts.


Let me introduce myself: I am a mystery author and humor columnist, and I am also a horse owner. Oddly, horses have never made it into either my books or my columns, even though they started my writing career, as a freelance writer for California Riding Magazine.


When my gelding, Snoopy, was three years old he won the 2007 Pacific Coast Quarter Horse Association Trail Futurity. Then on April 30, 2008, he broke his leg. The exact bone was the left hind sesamoid.


Five years later, after the surgery and therapy had returned him to good health, I decided to write a book about the experience. I had blogged about his injury and his long road to recovery, so I had plenty of material. (You can read more at http://thatsmysnoopy.blogspot.com.)


I quickly realized that it was not my story to tell. I didn’t break my leg, Snoopy did. My point-of-view was that of an owner paying the vet bills, trying to figure out whether she was going to end up with a horse or a lawn ornament.


Snoopy needed to tell this story, in his own words. 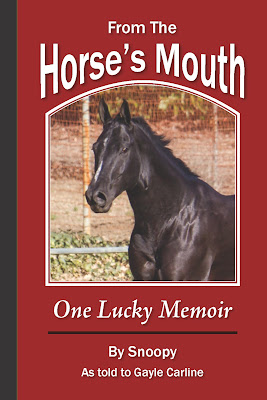 Telling a story in an animal’s voice can be tricky, but I had two things going for me. I’ve read other good stories that were told by animals. And I may not be sane.


If you think it’s normal to talk like your animals, then I’m as normal as you are. Whenever my husband talks to the dogs, I feel compelled to answer him back – as the dogs. When Dale says, “Not that ball. Give me the good ball,” I respond (in a high barkie voice), “No! That other ball is dead to us!”


It’s the same with my horses. For example, when my trainer tells Snoopy to move over, I can’t help but say, “Ho-o-Kay,” in a goofy way. I’ve even written some of Snoopy’s blog posts in his voice.


Before I started the book, I also went back and read some first-person animal books. Black Beauty is the gold standard, in my opinion. I also read War Horse, and The Art of Racing in the Rain (which is told by a dog, but I wanted to see the contrast between the species).


Black Beauty still won me over. Beauty is an English country squire on four legs, but his interests lie in the way he and his friends are treated by their masters. For example, he speaks of being trained to bear a saddle, and it’s all about the discomfort of the girth being offset by the handful of oats and the pats from his owner.


In War Horse, as much as I loved the story, Joey was just a man in a horse suit. In one scene, he describes the Union Jack hanging in a courtyard. Snoopy would only notice a flag if it was close enough for him to eat.


As for Racing in the Rain, that dog’s an Einstein next to my four-legged Forrest Gump.


When I finished, the end result was a book I’m very proud to have written. It’s a story that is by turns funny, poignant, and insightful. I’ve not only captured Snoopy’s voice, but given voices to his friends. My editor refers to it as “Black Beauty for the 21st century.”


What would be my advice if you want to write as a first-person in four-legs? You have to get inside their heads, just like any character. Spend time watching them, and set your imagination free. How would they describe things? What makes them happiest? Saddest? Make up their dialogue as they roll in the dirt or eat their hay or stand for the farrier.


Trust me, pretty soon, you’ll have a story!


In the meantime, how would you like a chance to win a nice prize? I’ve got a lovely Professional’s Choice grooming bag, a $25 Amazon gift card, and a copy of Snoopy’s book (autographed by him, of course) to the first person who can tell me, in the comments below, when Black Beauty was originally published.

And if you'd like to learn more about Gayle and her new book - here are a couple of links:

I also meant to comment that the book sounds great and I haven't read a new book in longer than I'd care to admit - I've got a set of young twins so my life was been too hectic to go looking for new books!

Geepers, Stephanie, was the ink even dry on this post before you commented? HA HA

Congratulations! Send me your mailing address and I'll get your prize to you. My email is gaylecarline(at)sbcglobal(dot)net.

Thanks so much for the post, Gayle. And what a great photo of your good looking horse on the cover of "his" book.

Thats what I get for having a busy weekend, I'm usually super on top of reading blogs and could always be the first one commented! Bummer, what a great prize!

Laura - thanks! I'm super lucky to have a good friend, Lynne Glazer, who is an EXCELLENT equine photographer. I recommend her to all my horsey friends.

Marissa - Stephanie was ON IT. Linda sent me an email to say she'd just put the post up and Stephanie had ALREADY commented!

I feel really embarrassed, lol!!! Seriously, I was just in the "right place at the right time" (I didn't even see when it was posted until I was called out on being so quick ::blushes::) - I've never won anything before so I am super excited!

Don't be embarrassed, Stephanie! You deserve to be a winner!

wow lovely looking horse try equestrianology.com you can give that amazing horse a web site or you could sell all equestrian stuff on there ! books and all :D for lower fees than ebay !