So today I have another gift for you. In honor of Halloween, my second novel, Hoofprints, is free today and tomorrow (Oct 30th and 31st) as a Kindle edition. Hoofprints features my series protagonist, veterinarian Gail McCarthy, and centers around the world of reined cowhorses. Hoofprints is rated four and a half stars on Amazon.  Click on the title to find the free edition and to read more about the book, as well as plenty of reviews. 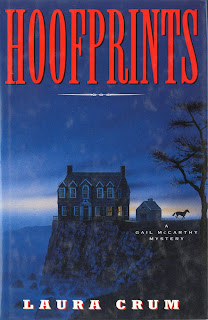 It occurred to me that perhaps some potential readers might wonder what credentials I have to write about about reined cowhorses and/or cutting horses. So today I thought I’d fill you in on my background in this area.
When I was in my twenties, I was obsessed with cowhorses. I went to work for several well known cowhorse and cutting horse trainers as an assistant, and I rode many, many accomplished horses in these barns, as well as helped train over a hundred young horses. I trained my good gelding, Gunner, to be first a reined cowhorse (we competed at the Snaffle Bit Futurity and placed in the Non-Pro and the Ladies Divisions), and then a cutting horse (we placed in the Non-Pro Division of the Northwest Superstakes when Gunner was four years old and went on to win numerous smaller awards, including the cutting at our local county fair). The photo below shows Gunner and me winning the cutting at the Santa Cruz County Fair when Gunner was eight years old. 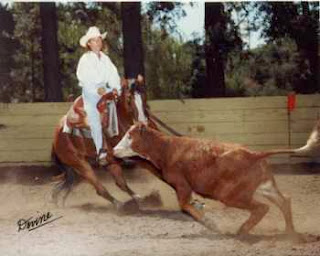 Along the way, I rubbed shoulders with some of the “greats” of both the cowhorse and the cutting horse world. We’re talking world champion trainers, incredibly wealthy clients, and some of the most talented horses you could ever imagine. I saw things that came right out of a mystery novel, from outright scams and incredible abuse, to charming sociopaths who would rip you off without a second thought. I also met some genuinely good-hearted folks who knew more about training a horse than most backyard horsemen can even imagine. I learned a lot. I saw a lot of, uhmm, colorful things. And when I began writing mystery novels at the age of thirty, I knew where I would set those novels.
And so Cutter, my first novel, was set in the world of cutting horses. For those of you who have read the book, I can assure you that every single character and incident was based (sometimes loosely) on something I actually saw or knew about (with the exception of the murders, of course). The horses, too, are all horses I have known. Cutter is rated 4 stars on Amazon and the Kindle edition is currently just 99 cents. Click on the title to find the book, and to read more info and reviews.

Having finished Cutter, I knew I wanted to do justice to the even more cutthroat world of reined cowhorses, with its own subset of wealthy owners and high stakes trainers. And so Hoofprints was born. Here is a brief synopsis of the book (from Amazon):

In this second installment in the Gail McCarthy series, the young vet stumbles upon two murdered bodies in the course of a routine call. When a midnight emergency turns into an attempt on her life, Gail knows she must uncover the motive before its too late. Plenty of authentic horse lore and an action packed plot from an author who spent most of her life training cowhorses and knows whereof she speaks.

Hoofprints has always been one of the most popular titles in my mystery series. It stands well on its own, but also holds its place as the second in a twelve book series about the life of veterinarian Gail McCarthy. One of the main characters in the book is Plumber, who, in real life is a horse I bought as an unbroken three-year-old and trained myself. Plumber went on to become a winning rope horse, bringing home numerous trophy saddles and buckles and many, many paychecks. The real Plumber is very much as described in the book—a sweet, kind, willing horse who really likes people. I still own Plumber—he is 24 years old and lives here with me as a retired horse and we all give him lots of love and attention. 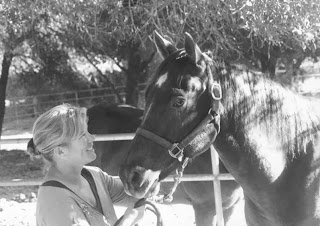 Plumber as a baby, next to his mother, Bucky. 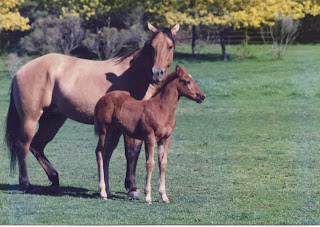 Plumber packing my son and me—yes, I know we should have worn helmets, but Plumber packed us like this without one misstep for three years. 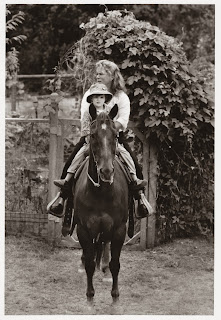 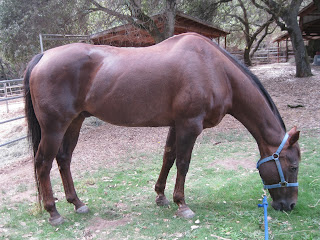 So for anyone who enjoys a good mystery and loves horses—here is a Halloween gift for you. Hoofprints will be free today and tomorrow as a Kindle edition. Get it while you can.
Happy Halloween! 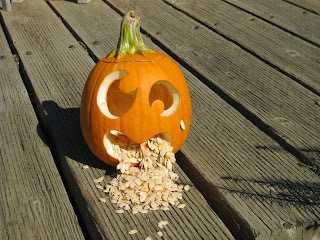 I love this book.