As some of you may know, my husband died recently of a rare and aggressive form of cancer. We were together for seventeen years and had a very happy marriage and a good life and I will always be grateful for that. But this is a time of overwhelming grief for me.

I've decided to try to keep going with the series of posts about how I developed my little property, because one of the few things that still engages me a bit and brings me some small comfort is tending this place, which Andy and I both loved and which bears everywhere the signs of our devotion to it and our fondness for the process of creating the kind of home that we both wanted.

I wrote the following installment awhile ago, and have not really finished it or polished it, but I'm putting it up today just as a way to get started again. I appreciate any kind thoughts and prayers sent my way, but have not got much heart for interacting on the internet (or anywhere else) right now, so forgive me if I don't respond.

Those of you who have purchased real estate will know how convoluted the next step of my process was. I called the number on the old and crooked real estate sign outside the gate of the place I’d stumbled upon. It was not a local office. I described the property I had seen and they said they had no record of it. I said their sign was there. They said they would call me back. They did not. I called them again. This went on for days.
But eventually they “remembered” that oh yes, they had listed this property for a client. It had been on the market for a year and no one had shown any interest in it. They had just forgotten about it.
At this point I chose myself a pleasant guy for a real estate agent, and I had him contact the other office. Things went quicker after that. We got permission to walk the property lines and my agent looked up the title. A few problems presented themselves.
There are always problems when it comes to buying real estate, it seems. I am not going to go into the particular problems we had here, because they are, quite frankly, not very interesting to write or read about. I will just say that it took time to work through them, but we did. I never wavered in my conviction that this was the property I wanted. The price was reasonable. It was also all the money I could possibly come up with. There would be nothing left over for building a house.
I know that some people would have taken out a loan, built a house, and still be paying off their mortgage, twenty years later. I am not those people. I never wanted to be in that kind of debt. Instead I sat down and thought about what I really wanted to do with the property. I spent time with this. Almost a year.
I owned my property and I visited it almost every day. Mostly I just sat and stared at it from various vantage points. Should the barn go here? Or here? Where could I have a riding ring? Where should the house go?
The property was not a blank slate. It was only two and a half acres of land, but there was plenty of topography to it. There was much to consider when siting the house, barn, corrals and riding ring—to name my original primary objectives. A year was not too much time to think this through.
There is so much that seems to be ignored when many people develop a property. Where will the sun come from at different times of day, what exactly can be seen from this spot or this spot? I paid attention. After a year I understood many things about the land I had bought.
I knew that I wanted the house site to be at the back of the little cup-shaped bowl that formed the rear acre of the property. This was the most private spot. From here one could not see another house—from any angle. And this privacy was what I wanted. The little round hollow in the hills faced south and would get good mid-day sun and winter sunshine. I knew that the only practical spot for a riding ring was in the middle of the bowl. Thus the barn and horse corrals would be built on the lower slope of the property, in the grove of liveoaks.
After sorting these things out, the next step was to bring in the bulldozer. Because there was no level ground—just a gentle, constant slope. And houses, as well as riding rings, benefit from some level ground. Not to mention the driveway petered out about halfway up the hill. So the bulldozer was employed to create a house site and a level riding ring, as well as to finish the driveway. Thus we embarked on the creation of my small horse property. 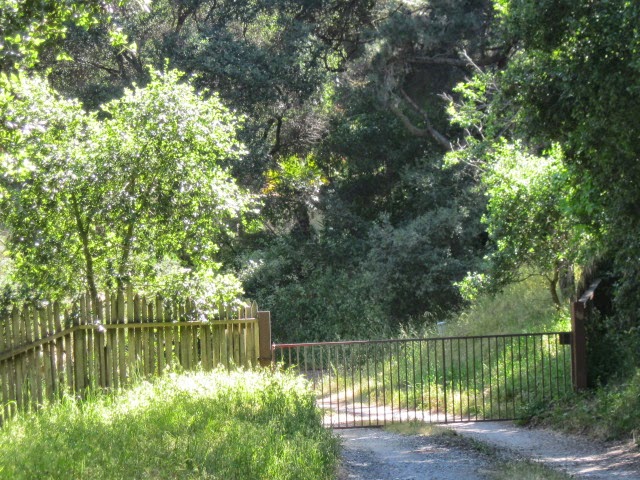 Laura, I am so sorry for your loss.

Laura,Im so very sorry for you and your sons loss.I had been wondering why you hadnt posted on here or FB.Actually was going to message ou on FB if you didnt soon start posting.So very sorry and my prayers are with you.

I am so very sorry for your loss. Sympathy and healing thoughts sent your way.

Sending you love and light and hugs, Laura. Take care of yourself and your son.

There are no words to truly express how sorry I am to hear the news of your husband..
Sending good thoughts your way.

I am so sorry to hear of your loss. You & your son will be in my thoughts and prayers.

What a tragic loss for you and your son. My thoughts are with you, and hope you have good memories bringing you some comfort.

I'm so sorry for you and your son. I can't imagine the depth of your grief right now. It sounds like he was a wonderful husband and father.

I am so sorry for your loss. I hope the good memories you have will provide some consolation in the future. Sending best wishes and thoughts to you and your son.

So sorry to hear this, Laura! Remember he is still with you, just not in the physical realm any more.

Peace be with you!

Laura, I am so glad to see you posting again and I hope the love you have for your home and animal family will help sustain you and your son in this tough time.

Hugs coming to you both from Virginia!

Laura, I am so sorry for your loss. My prayers are with you and your son during this sad time.

Oh Laura. I am so very sorry. I will be thinking about you and your son.

Whenever I see begonias, I remember the stories and pictures which you have shared here.

What sad news. My thoughts and prayers are with you. How lucky you both were to have had each other even for a (relatively) short time.

Laura, I've been remiss in reading, so I was so sorry to see this post today. Losing someone you love is so terrible, but as long as you keep him in your heart, he will always be with you. At least, that's how I feel about my mother. Enjoying the lovely property you had together, with the touches of love everywhere, will help ease some of your pain for sure. Thinking of you and your son, especially this time of year, and sending happy thoughts and hugs your way.