My next project? Writing book number eleven in my mystery series about equine veterinarian Gail McCarthy, of course. At least, that’s what I’m supposed to be working on. Don’t tell my editor (Merry, if you’re reading this, close your eyes), but lately work on the next book has been somewhat delayed by another project altogether. A project named Smoky. 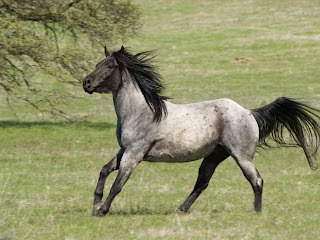 What a handsome and athletic looking fellow you have there Laura! He should do you proud when you are ready to start him back under saddle. And I surely will not question your decision to get a young horse ;)!!

You brought up a very good point. Horses are wired much differently than people are, and they KNOW how to "take care of themselves" in the situations you described. They can handle those big bodies over varied terrain with out a person up on them amazingly well. And they will stop when it is time to stop- not one stride too much, and not one stride before they are ready.

No matter how hard we try to "protect" them, no matter how many WAYS we try to protect them, if we trust their innate instincts and skills, the horses are better off.

Who knows the ability and tolerence better- the one LIVING in that body, or the one looking from the outside? :)

Great post Laura! Looking forward to more from you! (Now get cracking on that book before your editor goes haywire on you! LOL)

You are so right, Mrs Mom, especially about the fact that I'd better get to work on that book. I'm negotiating with my editor right now for a later turn-in date for the manuscript. Too many projects...mostly equine ones!

Oh,Laura, wonderful post. I've had my share of lameness issues this year. I swear my mare wait until show season then suddenly comes up with a limp, but I'll save that for my post.

Good luck with your handsome fellow.

Thanks Jami. What's going on with your pretty mare? I hate it when the horse I'm using comes up lame right when I want to use him--don't we all? But I hated it even worse when I was showing. I resorted to keeping pads on all four of Gunner's feet all the time during those years, just to prevent that eventuality (though now that he's retired and turned out he goes barefoot just fine--go figure.)

Smoky is beautiful! I admire you for giving him the chance to run and grow and experience the joy and freedom of those sixty acres! It's hard to watch them running and jumping on uneven ground. I've hard my heart in my throat many times over the years watching my horses doing the same. I suppose it's a mark of love for them that we keep our fingers crossed and let them do what they love.

Thanks for the wonderful post and sharing Smoky's journey with us.

Thanks for the nice comment, Mary. Smoky is doing well--he'll be a reliable riding horse--in about a couple of years. I always forget how long these projects take. He definitely wanted to buck this year when we started him back under saddle. (I immediately turned him over to a friend who can ride one that bucks and now he's going fine.) We'll ride him this summer and turn him back out in the pasture in the fall. Next year, as a five-year-old, I'll let my team roping partner start heeling on him a little. No pressure, just at practice ropings. That's the plan, anyway. Of course, you never know what will happen. But yeah, he's a nice colt.

He's gorgeous. I am real sucker for roans, red or blue.

Kay,
I am also a sucker for roans--one reason why I agreed to take this colt. Funny thing--this picture was taken of him in his spring "coloration"--in mid-summmer he is a steel blue-grey, in mid-winter he is virtualy black. Only in spring is he this odd white-with-black-points color. Roans are great--they change from month to month! Thanks for the comment.

He's gorgeous. Good luck with him.

I just discovered you from reading Mrs Mom. I am a writer also. And a barrel racer. I am looking forward to finding some time to go to your website to check out your books. "Chasing Cans" sounds like it will be right up my alley, no pun intended, lol.

Debi--If you do read Chasing Cans, be sure to let me know what you think of the barrel racing parts. I am not a barrel racer and have never been one, but I've been around it a lot. I used to team rope and many of my friends who competed with me also competed at barrel racing, and I have watched them many times. As for the trainer in the story, she is based on several trainers I have known--they were just not barrel racing trainers. Anyway, if you read it, let me know what you think. Thanks for the nice comment.

That Smokey boy is one fine-looking fella.

Must go get CC. No, I've never chased cans myself, I'd rather run outside for hours (the R&T championship is this Saturday with a course over 30 miles long that includes summitting Mount Jura)but your novels always bring some facet of the horse world alive for us. Looking forward to the read.
-Lisa

LisaPreston--Are you the same Lisa Preston who has been emailing me for many years? It must be--with the ride and tie avocation. How did you find this blogspot? Hope all is going well for you--I just got back from horse packing for a week in the Sierra Nevada Mts, so haven't checked in here for awhile. Thanks for the comment. Hope your competition went well.