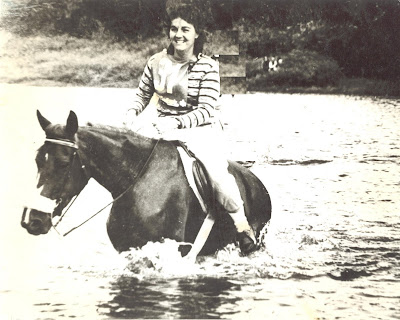 I'm happy to welcome guest blogger, Patti Brooks. Patti is the author of an equestrian fiction book, Fame and Deceit. Welcome, Patti!!!
Setting my stories in the horse world is a given as I’ve been immersed in everything horse since, at age nine, I earned my pony’s keep by giving ten-cent pony rides. Writing was in my blood as well and as a teen I sold my first article to a national magazine for $3.00. That sealed my fate. I spent my life with horses and writing.
I kept a notebook of story ideas with the thought that since I am a professional horse trainer, someday I’d be bound to break a bone and be laid up for six or so weeks and then I would write the first of many books. Sure...dash off a publishable first novel in six weeks!
Fortunately I did not break a bone but I did learn my way around a computer and a non-horse story was put in my lap, begging to become a novel. Four years of research and another four to polish sufficiently to catch the eye of a publisher and that story became Mountain Shadows ( a historical set in the Prohibition era in the Adirondacks). I am pleased that it has become required reading in a number of Adirondack high schools. It taught me I had to make time to write and for me that meant starting my days at four a.m.
Now that I had some basics, I thought my first book set in the horse world would be a cinch. Certainly did not need four years of research to get my setting down. I lived my life surrounded by all things horse.
I took part of a number of workshops and found them priceless. But I was surprised at the feedback encouraging me to flesh out the horsey stuff. I always fret about being too preachy. I want to tell an intriguing story, not teach my readers how to train a horse.
When I sent Fame & Deceit out in the world to find first an agent who would then find a publisher I could work with, I received oodles of stock rejections and quite a few requests for the entire manuscript. Some of those came back with worthwhile suggestions that I acted upon, some came back saying horses don’t act like that, and others came back saying an audience of primarily horse people wouldn’t sell enough books.
That is what frustrates me! Why couldn’t Fame & Deceit be as successful as Tom Clancy’s first novel, Hunt for Red October, that is set in the submarine world? Certainly more people would be intrigued reading a murder mystery with horses trotting through it than with submarines lurking under the seas! Were his readers mostly sailors? Course not.
But even if a reader has to like horses to enjoy my novel, that is hardly restrictive. The American Horse Council’s independent survey indicates there are 13 million people in the US over eighteen that consider themselves to be horse people. I’d be happy selling a book to half of them!
But there’s another rub! I was fortunate with my first novel to receive dozens of letters from kind folks who praised the book. Unfortunately, so many of them proudly told me they passed the book on to friend after friend. Given what an author makes on the sale of one book, readers need to be encouraged to send their friends to the bookstore to buy the book. Just before Christmas (four years after the book came out) a woman sent me a handwritten note saying she passed her copy on to fifteen people. Heart-warming, but not wallet-filling.
These are things I grumble about, but it won’t stop me from completing the next book in the series.
Patti's Bio:
There were times when my husband, Bob, and I had as many as a hundred Morgan Horses on our farm in East Lyme, CT. Although I’ve been an avid horse show exhibitor, my real love is competitive distance riding and being open to take on off-beat endeavors. With my Morgan stallion, Peppertime, we appeared in TV commercials and were chosen to jump out of a horse-size birthday cake to celebrate the bicentennial of the Morgan Horse.
I have served as President of the New England Morgan Horse Assn. and was inducted into the American Morgan Horse Association’s Hall of Fame. Currently she is sePrving a term as President of the Eastern Competitive Trail Ride Assn. and teaches a fiction writing class at a local community college.
Patti's Author Page at Aberdeen Bay Publishing

Posted by Jami Davenport at 4:37 PM