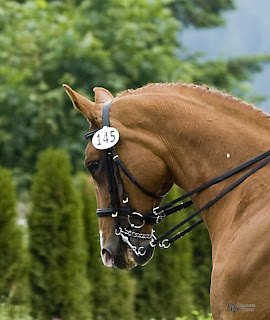 Okay, forgive me, but I'm going to do some shameless promotion. I try not to on this blog, but I'm really excited about my new release, The Gift Horse. You can purchase it from Bookstrand in ebook form on February 17 or pre-purchase it now. It'll be in print in about two months and available from Amazon and Barnes and Noble at that time.

The Gift Horse is my first actual equestrian fiction book. My others had horses in them, but this book actually features an opinionate Hanoverian mare as a secondary character. It's a mainstream romance with dashes of comedy and mystery. I hope you'll check it out.
I especially want to thank Carolynn Bunch of Carolynn Bunch Photography who generously allowed me to use a horse show photo she took of my mare on the cover (see above).
Here's a short blurb, and you can read the first chapter on my website. 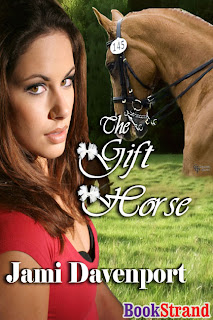 The Gift Horse
Book Three of the Evergreen Dynasty Series
Never look a Gift Horse in the mouth?
CARSON REYNOLDS would dispute that statement. After all, it was a gift horse that got him into this mess in the first place. Carson has never backed down from a challenge, but he’s never faced a challenge like this one. It’s the project nobody wants. It’s doomed to fail from Day One because of lack of money, lack of planning, and no lack of a difficult, interfering sister. Carson’s mission is to transform a run-down horse farm into THE premium horse training facility in the Pacific Northwest and transform the disorganized resident horse trainer with a penchant for self-sabotage into a confident, professional equestrian of international caliber.
Unfortunately, City Boy Carson doesn’t know one end of a horse from the other, and the large creatures scare the heck out of him. His situation is compounded by a love-sick, 1500-pound mare with a crush on him , his growing attraction to the grungy horse trainer, a disruptive sister who insists the trainer be fired, and a demanding father who has lost faith in his son’s abilities.
Tired of running from herself for six years, SAMANTHA MACINTYRE has returned to the scene of a horrific barn fire allegedly caused by her carelessness. She accepts the head trainer position at that run-down facility with the hope of defeating her demons, proving her innocence, and earning a permanent position at the new equestrian center. With lofty aspirations, but no money and no horse, Sam will do anything to ride the talented, though difficult, horse Carson received as a birthday gift from his family. But first, she must pass the test: compete the horse for one season, impress Carson, and best his sister’s preferred trainer.
As Sam gets closer to the truth regarding the cause of that long-ago fire, small mishaps begin to escalate into larger, more serious, accidents. Carson’s horse knows the real perpetrator, if only those dimwitted humans would listen. With no where else to turn, Sam confides in Carson and together they delve into the actual cause of the fire. With the help of an opinionated equine, they face a surprising reality--that love is more important than ambition, money, or blue ribbons.
Let me know what you think of my book if you read it.

Posted by Jami Davenport at 8:49 AM