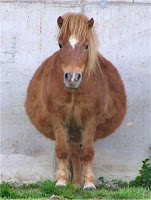 Body condition has been on my mind and in my 'topic' bank ever since the fall rains then sunny but cool days hit Virginia. We have lush grass in our pastures, and in every conversation with the riders I know, the word 'fat' is used to describe our horses. Often I am the one using the word 'fat' because my horses, especially the pony, are roly poly. (This is not a photo of my pony--just one I borrowed from google images.) They don't get enough exercise and are not penned in dry lots, so they graze constantly with no 'off switch' (think Labrador Retrievers and the fallacy of self-feeding.) If this was spring, I would be limiting their intake for fear of founder, but everyone assures me that since my horses have been grazing (guzzling)all spring and summer and since the fall grass does not have the burst of nutrients, they will not founder. They'll just get, well, fatter until winter sets in, and when the vet comes, he will shake his head and will not give them an optimal 'five' score.

Lush grass and body condition are also on my mind because I just came back from five days in Colorado. We flew from Atlanta to Denver, and for at least half the trip, the clear skies allowed me to see and be amazed at how dry and brown the parts of Oklahoma, Arkansas and southern Colordo were that we flew over. And I mean brown. Not a splotch of green unless it was an irrigated circle. Fort Collins and the foothills where my brother lives are also dry and unless the pastures are irrigated or along a river or stream, they are brown. I saw a lot of horses. Most were pastured in small fields that had been grazed to dirt. The horses looked good and would probably have been rated 'five,' but I also saw many that seemed thin and listless. Horses are grazing creatures, and if there is nothing to pick at (and they are penned up so they can not move to better grazing like wild horses) it is not optimal either. I also know that when there is no grass, hay is in short supply and people don't have extra money due to the economy, more horses will be neglected and/or dropped off at rescue farms.

Too lush, too dry--neither is optimal, but as always, we horse owners do the best we can with the land, weather and conditions. My challenge is also finding enough time to ride. I'm teaching four courses this semester and traveling to promote my books along with the regular chores reguired by animals and home. Lately we've had great weather, and I'm trying to ride at least three mornings a week--but that's not enough to get my horses from fat to fit.

Do you have challenges to achieving the body condition score that you would like for your horses? Or are you able to balance exercise/nutrients to have that optimal fit horse? I'd love to hear your comments!

(On another matter, Dunslidin please email me at alison@alisonhartbooksdotcom re: Risky Chance giveaway.)

In California our problem is not grass, we are probably more brown than Oklamhoma and Colorado this time of year, but our problem is keping enough moisture in our horses digestive system to prevent colic. I have too small grass turn-outs, but like you only worry abouy founder in the spring. I do have a couple of ponies that seem to get fat on air even though they do get ridden 4 or 5 times a week. Obesity is not good not only because of the risk of founder and other metaboloic issues like insulin resistance, PSSM, and Cushings, but it is also very hard on the horses joints. I know of people in the east that muzzle their horses at pasture for various times of the day to restict intake. Also, any chance there is an eager teenager in your area that could responsibly help you exercise your horse??

Since mine is a comepetition, exercise is not the issue, boredom is. I do think that horses who live at pasture may be happpier since they live in a more natural state. I have several ponies and a few horses who need to be fed 4 or 5 very small portions a day to keep them from either eating their own poop or being destructive out of boredom. Like you said, there are challenges so matter where you are. I am working on my blog for tomorrow about my trip to Kenya and the horses I rode there. Talk about conditions foreign to ours!

Alison--I have problems similar to yours when it comes to managing my retired "pasture pets" who are turned out 24/7. With my horses at home, who are in large corrals--big enough to run around freely, not big enough to grow grass--I feed hay three times a day and monitor each horse closely. I am always raising or lowering the amount each horse gets in tiny increments. This is done by "feel" rather than measurement--I have been feeding horses non-stop for forty years and have a good feel for it. Kept like this, my horses are never more than a hair on the fat side or the thin side--when they are, I adjust and move them the other direction. Its a constant balancing act. But as you say, they do not have the pleasure of grazing at will, as pastured horses do. There just doesn't seem to be a simple solution.

PS--Alison, I just ordered Risky Chance for my son, who is keen to read it--since I failed to win your contest. I'm not surprised--I have never won a raffle drawing in my life (!) But that's OK--I've had other sorts of good luck--just not raffles.

It's always so interesting to read the challenges other riders/owners, and in your case, professionals have caring for horses. I tried the muzzle one spring and my very smart mare managed to knock it off her nose (so it was dangling dangerously) every time. And an eager teenager would be terrific except we don't want to worry about liability issues. On a lighter note, I am really excited to read about your trip! I am sure horse keeping issues in Kenya are completely different than here.

I would have sent you a copy of Risky for your son! If he enjoys it, let me know and I will gladly send him an autographed copy of Bell's Star (book two) Of course that one is not about California!

We have mostly solved the hay distribution issue with slow feeders and small mesh hay nets. I spread them out around our track so the boys don't usually stop and stuff their faces for any length of time. I also rotate our paddocks (well, when we have grass - we're so dry in Texas they boys haven't been out on pasture since April) regularly. Even if they just get 4-8 hours or so a few times a week, they seem to enjoy it and it helps keep them moving.

My husband was just in TX and reported how dry you guys are. And here I am blogging about TOO much grass!

I love your blog, btw. Are you on our favorites list? I wasn't sure. If not, let me know and we'll make sure you are. I did notice that when I clicked on your name it took me to your old blog.

Alison, good topic.I tend to have fat horses, but it's become the least of my concerns after last winter. My big boy (16h @1200lbs) lost a substantial amount of weight last year and though the vet said it didn't hurt him physically and he was probably at a better weight for his size, Bo looked way too skinny to me. Needless to say, I have fattened him up over the summer!

I guess I'm just use to seeing my two guys chubby.The last time I scored my two guys they were about a 6, but of course that's my evaluation.I don't have lush pastures. I have "enough" through the summer months but sometimes I do overcompensate with hay, especially in the winter months.

Congratulations on finding time to ride! Riding would help my guys, especially Bo. Now that I have my mud problem solved in the saddling/corral area, I really have no excuses, but for some reason, keep finding them.

Leslie, like you, slightly chubby seems better than thin to me, but Terri pointed out some real health concerns.

Next nice day, saddle up! I find starting with a safe, short ride that is pleasant for both of us (meaning me and my horse) encourages me to go again and again--until the dang weather interferes!