Trip of a Life Time by Terri Rocovich

Some how I knew that this trip would change me. That I would come back different, with a new broader perspective of the world and my role in it. This is the case in more ways that I will ever be able to cover in one blog post. Therefore, this will be the first in a series about the incredible country that is Kenya.

First let me give you all a general overview. The trip started its planning stages well over a year ago but I have wanted to go to East Africa as long as I can remember. There were 4 of us from San Diego that ended up going although originally it was supposed to be 6 of us. Circumstances changed for some so it ended up being just 4 old friends and we joined up with others taking the Safari once in Nairobi. The trip was a riding Safari in Masai Mara, a region that is known not only for its beauty but also the diversity and bounty of animals (I hesitate to use the term Game because I loathe hunting and I associate the terms). Our group flew from San Diego to London, spent a night there to acclimate and then flew to Nairobi; a total of 22 hours of flying time and a 10 hour time difference. Talk about jet lag!

My friends and I started our adventure in Nairobi with a 2 night stay at a place called Giraffe Manor. The hotel per se is like an old English Manor that also happens to be home to 11 Rothchilds Giraffe as part of a conservation and education program. The Rothchilds Giraffe is extremely endangered with only about 600 individuals left in the world. The service and food was on par with a four star hotel with the added gift of being near and even being able to feed the giraffe. The staff at the Manor delight in their jobs and their relationship with the Giraffe and they are eager for you to have an equally amazing relationship. 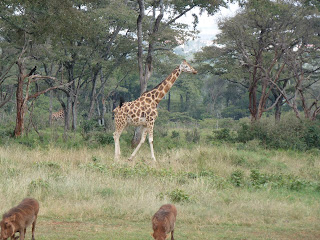 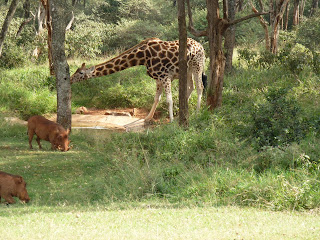 We arrived at the Manor in the late afternoon after flying all night from London and taking several hours to go through customs, get a trip Visa and then the drive from the airport through Nairobi which is one the most dangerous parts of the trip. We were all exhausted but were quickly reenergized at site of our first Giraffe. I have spent my life around horses and other large animals and am rarely intimidated but I will admit that it is very intimidating the first time a massive giraffe walks up, towering over you and reachs down with their long necks to retrieve a treat from you hand. They are as graceful and beautiful as they are kind and gentle. Beautiful is a word that doesn't sufficiently describe them. Their eyes are I think the most gorgeous in all the animal world. They are large and dark with eye lashes that would make any super model jealous. They move with a calm, deliberate and elegant stride. These giraffe know that they have no threats so they are even more relaxed than most although I will say that even the Masai Giraffe that we saw later on the Mara possesed a similar tranquility to their demeanor. 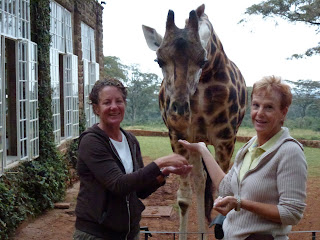 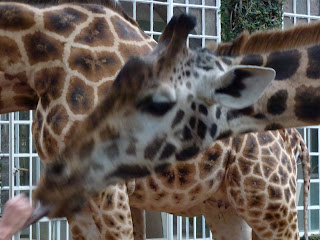 The next morning I awoke before dawn not quite knowing what hemisphere I was in. The staff had brought coffee to my room when they saw my light on so I walked out onto the balcony connected to my room to watch my first sunrise in Africa. And to my delight there stood Daisy, one of the Giraffe looking up at me (since my room was on the second floor) as if to say "Welcome to Africa." All of the rooms at the Manor are supplied with tubs of hay pellets, so I watched my first sunrise in Africa sipping coffee and feeding Daisy from the edge of my balcony. Surreal to say the least. Our 2 days at Giraffe Manor were filled with hours watching and feeding the Giraffes and worthogs, watching the antics of the resident dog, shopping in Nairobi and a tour of the home of Karen Blixen, the author of Out of Africa (One of my favorite books). The group visited a baby elephant orphanage were we all "adopted a baby" to help support the effort. As you may already know, the African Elephant is endangered and sadly babies are orphaned quite frequently due to poachers, the drought and human conflict.
Later that day we were even treated to a visit with Ed, the 3 month old baby giraffe that was generally shy of people. Watching Ed (who was born standing 6 feet tall) and his Mother, Lynn, was not unlike the behaviour we see with mares and foals. They are doteing, loving Mothers who never let their young far from site. 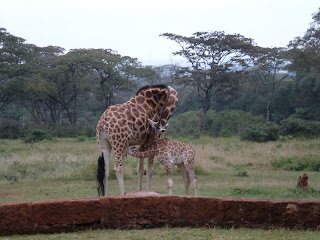 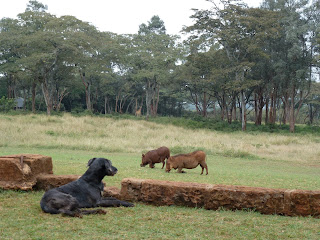 On our third day we went back to the Nairobi airport to catch a small plane to meet the horses and the Safari guide on the Mara. Little did we all know that later on that day we would cheat death not once but twice and see more variety of wildlife than you can see at a zoo and this was all in a few hours. Unbelievable! Upon landing on a small dirt airstrip, we met Tristan our guide. He was charming and intelligent as well as direct. My kind of person. On the edge of the airstrip were Zebra, Antelope, Wildabeast, Masai Giraffe and Cape Buffalo. As we drove toward camp along the Mara river we saw hundreds of Hippos and 2 HUGE crocodile. Not long after, once we arrived at camp, Tristan announced that the group would "attempt a river crossing" later that afternoon. I did not like the word "attempt" and did he not see the crocodile the size of a small car basking on the river bank!

Well we did cross the river, which was almost up the horse's necks and crossed only feet away from Hippos partitially submerged in the water. Hippos are actually considered one of the most dangerous animals in Africa and cause more injury and death to people than any other species, including the big cats. Yes that is me below on the gray, almost getting swept downriver, where the hippos were. Almost a little bit more up close than I had planned on. 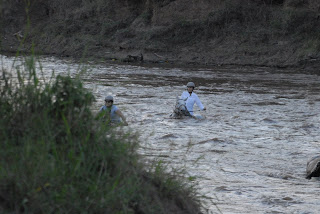 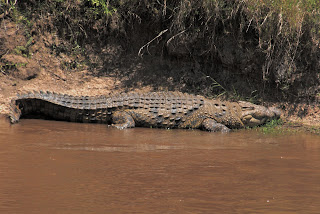 Let me say that the horses were amazing and unflappable.
The horse I rode, Sage, saved my butt more th 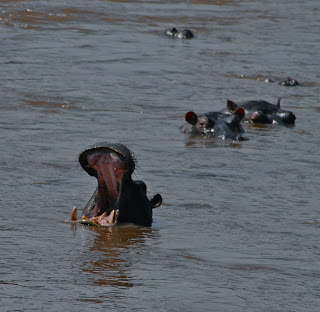 a few times. Most of the horses were no beauty queens but they were tough and smart and incredibly fit. Any of my wimpy California show horses, would be begging for mercy and booking the next plane home.

Little did any of us know that later that ride, we would have an encounter where the horse's bravery would be tested not to mention our own. My heart would be beating harder and faster than I thought possible and I would realize that there was no guarentee of safety on this trip. This was not to be a tame Safari ride by anyone's stretch of the imagination.

With that teaser, I will leave the details to my next blog. Hopefully I have not bored you all, I fear that it may be nearly impossible to convey what an amazing adventure this was.

Posted by Terri Rocovich at 1:36 PM

Jeez Terri--We are supposed to wait how long to hear how you almost died? No, you're absolutely not boring me.... I wish you would post the sequel tomorrow (!)

Ditto! - What Laura said! I LOVE giraffes, and that 2 day stay visiting them would have been cool enough, but then you went to a camp to ride horses, correct? Ooh, I want more. Pics of the horses, what kind of gear? What were your accommodations? How far did you ride each day? And river crossings with hippos and crocodiles?? Um - O.M.G. Post more! MORE!

Okay, you've managed to eclipse all our blogs in one shot! Great photos and descriptions and I can't wait until the next installment. Soon I hope!

Super photos! Can't wait to read, 'the rest of the story'!

I wanted to let all of my Equestrian Ink authors know that I passed on the "One Lovely Blog" award to you. I really enjoy your posts and think the blog is truly lovely! A nice reflection of its authors!
You can see more about the award at: http://livingadream2.blogspot.com/2011/10/lovely-blog-and-welcome.html

Thank you all. It makes me happy that you have liked my post. I think about my africa adventures almost daily and can't wait to go back again. I am working on another post for this Monday so I won't keep you waiting long. Linda I will give more on the accomodations next post but this definitely was not a "luxury" vacation. We slept in tents that at least had cots but the toilet was a hole in the ground and showers consisted on warmed up (Thank God) water from the river. The water was brown, had sediment and really smelled but after riding as far as 35 miles in a day, any kind of shower was welcome. We moved camp every other day, so everything had to be packed and mobile. More on Monday. Take care all!

Fascinating! Looking forward to the rest of your installments.