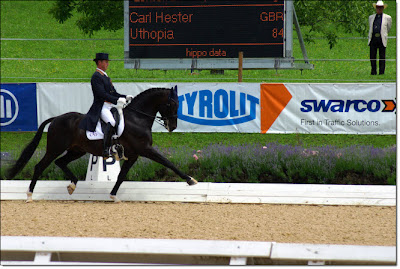 A funny thing happened to me a couple of weeks ago while I was having my lesson with Marie-Valentine. I hadn’t seen her for a week or two, and I was having a little moan about what my other trainer, Greg, dscribes as my "problematic left hand". I don’t know why but I can never seem to keep it as stable as my right hand, and it’s something that bothers me, because how can it be possible that after all these years something as basic things as that this still eludes me? I wasn’t having a full-blown melodramatic meltdown, more of a jokey self-disparaging poke, which, when I think about it, is probably linked to my Britishness. It’s typical of me, and I’ve been trying for years to remind myself to lose the self-disparaging comments and replace them with positive affirmations to boost my self-esteem. Let’s just say it’s a work in progress. Anyway, that afternoon, as I struggled with keeping my hands level while working on the canter, Marie-Valentine interrupted my “oh-sucky-old-me” soliloquy with a smile-infused “sit tall and think of Carl Hester”.

Immediately, I straightened my spine, raised my head, lifted my hands and put them together, sat deeper into my saddle, pushed my heels down and pulled a mock-posh face. Haha! Carl Hester? Me? Yeah right!

However, beneath me, for a few magical seconds, 490 kilos of horsepower floated up to meet my comic impersonation of one of the best dressage riders in the world. The contact softened, Qrac’s back came up as his hind-leg stepped under a little more and he went into a fabulous, flowing self-carriage.

Stunned by Qrac’s reaction, after a few strides I Carl Hestered my horse back into walk using little more than my stomach muscles and turned to look at my trainer who was grinning from ear to ear. “Et bien voila!” she giggled. “Carl Hester!” 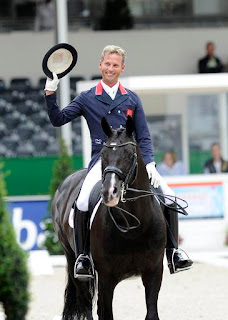 The funny thing is, I’d never seen Carl Hester in action until this year’s European Championships in Rotterdam in August. I’d heard of him of course, but only vaguely. We don’t get much dressage on television here, and the only dressage magazine I get is US publication “Dressage Today”, which he might have been featured in at some point, but I’ve no precise memory of reading about him. Not that I’m much of a reference in who’s who in dressage; a couple of years ago Marie-Valentine and one of her clients went to Holland to look at some horses and came back practically hyper-ventilating because they’d touched Totilas. “Who’s Totilas?” I asked, innocently. Yep. Oops. Granted, it was slightly prior to Totilas mania, but still… I felt a bit silly.

Anyway, on the day of my lesson with Marie-Valentine during which I had my “Carl
Hester moment”, before I picked Qrac up to start work, I’d been walking around the arena on a loose rein, chatting with her about this and that, and happened to mention Carl Hester‘s phenomenal performances in Rotterdam on his ten-year-old stallion, Uthopia, telling her how blown away I’d been by this exceptional couple. Personally, from what I saw, I prefer Uthopia to Totilas, I think he looks more smooth and floaty, and that the movement in his hind legs matches the movement in his front legs, which isn’t the case with Totilas’, but that’s just me. I’d never discussed Carl Hester with Marie-Valentine, but I must have spoken about him with sparkly eyes because it obviously stayed with her, and she was smart enough to get me to visualize his impeccable seat and try to channel it, if only half-jokingly, and if only for a moment.

Ever since my “Carl Hester moment” on Qrac (pff!), I’ve become a true fan of Carl. I’ve watched umpteen videos on the Internet, and thanks to Stacey Kimmel’s wonderful blog, “Behind the Bit”, found out that he’s released a DVD, “At Home with Carl Hester”, which I ordered and am in the midst of watching (incidentally, while I mentioned earlier that I’d pulled a mock-posh face the first time I tried to emulate him, I’m delighted to report that Carl comes across as a lovely, down-to-earth person and not posh at all!). Now, whenever Marie-Valentine comes to give me a lesson she invariably shouts out “Carl Hester” at one point or another in order to get me to sit up straighter and carry my hands; it’s become something of a Pavlovian reflex. I’d love to do a clinic with Carl Hester! Dear Mr. Hester, if ever you read this, why not consider a nice little trip to the shores of Lake Geneva sometime next year?

While Carl flips through his agenda to see when he can fit me in, let me ask you. Do you have a role model? Someone you admire and aspire to emulate, no matter what discipline you ride in? Tell me about them, I’d love to hear.

Posted by Francesca Prescott at 3:31 AM

Marilynne Robinson. My fave current novelist. Her prose is absolutely incredible and her characters are "them" and not "her" at all.

I had a trainer years ago that would stand outside the hunter show ring and yell, "Nice rack!" as my mare and I went by. Inevitably, I would lower my shoulders and open my chest, lifting my hands, and my horse...and we'd have a better ride. It also made me smile, which I am guilty of forgetting, no matter how much fun I'm having on my horse.

I think once your trainer finds that one phrase that gets you to pull everything together for your ride, all of a sudden things start clicking!

I too have become a Carl Hester fan. HRTV (Horse Racing Television) in the US has run his At Home with Carl Hester series and I have five of the programs DVR'd. He has a BEAUTIFUL place on an island off the coast of England, with dedicated working students and gorgeous horses. I am especially jealous of the drying rack he has for the horses--an overhead arch that take them from shampooed and rinsed through "dry."'

He does ride beautifully and he explains things so well. I have a Horse & Country episode where he rides a chestnut and explains the training that goes into GP movements.

I'll never get there, but it certainly is beautiful to watch someone who has made it.

Francesca--Your post made me laugh--especially the part about Carl flipping through his agenda to fit in your lesson--you are too funny. I, however, am a totally lazy horse person these days--just poking along on the trail enjoying myself, neither trying to improve my horsemanship nor learn new things. So no, there is no one I am trying to emulate--I guess that's a sad state of affairs.

Francesca, Yes, I can picture how the "ride like Carl" part would work.

TBDancer, I'm going to have to check out HRTV. I wonder if I get it on DirecTV?

LK! Thanks for wandering over to this horsey place. Glad you enjoyed the post :). I'll have to look up Marilynne Robinson.

Promise: "Nice rack" is a good one! I think my trainer used something similar with my daughter a few years ago. And you're right, it's good to smile when you're riding, I smiled a lot during my lesson yesterday (Marie-Valentine "Carl Hestered" me loads of times!). Smiling relaxes you, so relaxes your horse. Good point!

TBdancer: would you believe Carl Hester messaged me this morning?! I sent him the link to the blog yesterday, never thinking he'd answer, but he sent me a lovely message! Made my day!

Gayle: that was amazing! In a similar vein you might check out Clemence Faivre and her stallion Gotan:
http://www.youtube.com/watch?v=7ujafq_I3WY
Amazing riding!

Jami: I'd send you the DVDs after I've finished watching them, but I dont think they'd work on your DVD player :(. Or would they?

This made me smile - I channel various people too when I feel the need to be a bit more centered and still. Francesca, I see you've discovered this for yourself but I thought I'd add my 2 cents to the opinion that Carl really is a genuinely nice guy - I've worked as a groom in his ambit and have never seem him be other than good to his staff or his horses!

Not channeling anyone, but I have a phrase that I *think* I made up (if I heard/read it somewhere, I can't place it). Someone was asking about not hitting your pubic bones on the front of the saddle, and I said:

So I do have that in the back of my mind LOL!