With dire talk about the overpopulation of horses, and the fact that many end up unwanted and perhaps going to slaughter, it seems almost hypocritical to write a post celebrating foals.

But hey - it's almost Spring. Time of hope and renewal. And there are certain foals, born to royal equine parents, which are so eagerly awaited they are a cause for celebration.

Remember the brilliant race mare Rachel Alexandra, who captured not only the Preakness but also Horse of the Year honors in 2009? Last year she was bred to two-time Horse of the Year Curlin, and here is their foal, a colt born January 22, 2012. 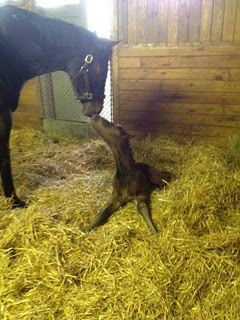 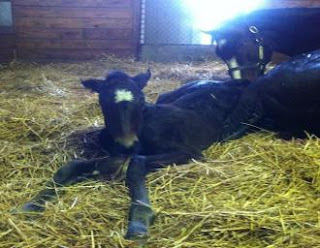 But the horse I am most excited about foaling is Zenyatta. After winning 19 races in a row, including the Breeders' Cup in 2009 and being named Horse of the Year in 2010, she was retired to broodmare status and bred last year to Bernardini. She is expecting her eagerly awaited foal in early March. Here she is heavy in foal, with her friend Tasty, (the grey) who is due at the same time: 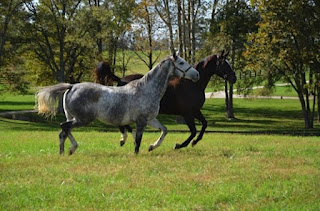 I have been a huge fan of Zenyatta during her racing days, and I'm not ashamed to admit I'll probably go all gaga over the news of her foal. I even had a "squee" moment when she was moved to the foaling barn last week, in anticipation of her new arrival. Here she is in her new foaling stall: 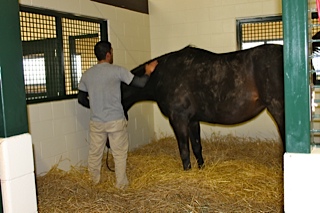 If you'd like to follow along with news of these "royal" horses - Zenyatta has her own "diary" right here: http://www.zenyatta.com/category/diary and even her own facebook page: https://www.facebook.com/ZenyattaOfficial and you can learn more about Rachel Alexandra and her foal here: http://www.stonestreetfarms.com/ or here: http://www.drf.com/news/rachel-alexandra-foal-doing-well-day-after-birth
Have you been following the news of either of these "royal" births?
Any other horse arrivals that you are looking forward to?

I'm excited, too! I've been following Zenyatta on her blog for over a year, and now Rachel on Facebook.

OOOOH YES, I have been following! I, too, am a huge, huge Zenny fan, and am extremely excited about the impending birth. Rachel's a great gal and the new boy is adorable (love that photo of them touching noses), but my heart truly belongs to the Queen. I read her Diary several times a week. For the record, I think it's a BOY. :-)

I know what you mean about those of us who deplore the overbreeding of horses, including TBs, being hypocritical about these two progeny. But they truly are special. :-) I also appreciate how much Z and Rachel did for the profile of racing, and that they have truly caring owners. The Mosses have given a LOT of money to TB rescue.

As an aside, I was telling my hubby the other day how I can't wait for Baby Zenardini to arrive, and he asked me, "Do they know what she's having?" I had to admit I really didn't know if it was possible to determine a foal's sex in advance. So I Googled that, and yes, it sure is - so I would not be surprised if the powers that be do, in fact, know who's going to emerge from SuperMare. We'll all stay tuned to find out!

Ah - Teresa and RiderWriter - yes, I see that you are fangirls, too. I can't remember when I've been so taken with a horse as I was/am with Zenyatta. And you are correct, the connections of both Rachel and Zenyatta have done a splendid job of giving back to the sport of racing and the breed in general.

The way that Zenyatta's care, breeding and pregnancy have been handled online, which makes her adoring public feel as if they have access to her, is first rate. If we want to celebrate horses and have people appreciate and adore them, then why not have fan pages?

I have heard that the Mosses chose not to find out the sex of Baby Z (haha Zenardini) so I guess everyone will just have to wait and see. Now if we could just get them to put a foalcam in her stall - LOL - then we could all be on baby watch and get nothing done!

I haven't been so taken with a horse since the mighty Secretariat. The part of Zenyatta's story that makes me the happiest is how all of the decisions made by her connections seem to have her best interests at heart.

If only the rest of the racing world would follow suit.

Can't wait for the bebe - I imagine Zenyatta will excel at motherhood as she has all her other pursuits. ;)

Absolutely! I've had the extreme honor of seeing both mares in person - I was at Rachel's Preakness, and got to go to the barn to meet Zenyatta (wasn't allowed to touch, as she was racing the next day) with some friends in 2010. I can't wait until Zenny's baby gets here! I'm hoping for a filly, but will be happy with whatever she has as long as it's healthy.

I would not be surprised to learn that she DOES have a foalcam in her stall - she had a camera in her stall when she was in training, and it streamed to her owner Ann Moss's computer so Ann could check on her any time she wanted! So I kind of suspect Ann may have the same setup now. I would, if she were mine!

Zenyatta has said on her diary (through her ghostwriter Dottie Ingordo-Shirreffs) that the Mosses have not had her tested to see the sex of the foal - they want to be surprised!

Like RiderWriter, I have deep respect for Rachel and her baby is adorable, but my heart belongs to the Queen.

By the way, Stonestreet Farms does have a video of Rachel's little guy romping in a paddock. You can see it, along with some news releases and other photos, here: http://www.stonestreetfarms.com/info/?page_id=144

CFS - Just had to comment again to tell you I am EXACTLY THE SAME WAY - I am a deep-down, hard-core Secretariat super-fan, and didn't think any famous horse would ever come close to capturing my imagination/heart the way he does - but Z is pretty special. Put it this way, I have one photo of her on the wall with the dozen of Big Red. :-) That's sayin' a lot!

Now that you mention it, I think I did read somewhere that the Mosses didn't want to know the sex of the foal. We were the same with our first child - the surprise was awesome. With the second, which I knew would be the final one, I wanted to be prepared!