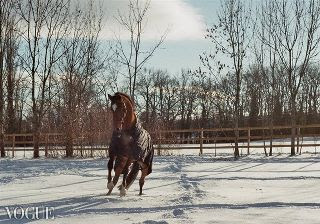 Retired ? Over the hill? At almost twenty, our former dressage schoolmaster Kwintus may be livin’ la vida tranquila in the rolling hills of Burgundy, but he now has something in common with Kate Moss, Elle McPherson, Naomi Campbell, Cindy Crawford, et al. Our handsome old gentleman was recently featured in Italian Vogue Online, courtesy of my talented daughter, Olivia (www.oliviabossert.com).

Olivia is studying Fashion Photography at Falmouth University in Cornwall, and, some time ago, she submitted a series of photographs to Italian Vogue’s online talent-spotter. Most of the photos were fashion oriented, but one of them was a photograph of Kwintus showing off his “airs above the ground” in the snow. I think it’s a wonderful photo, and clearly someone at Vogue thought so too since it was picked up and posted on the iconic magazine’s website, along with several more of Olivia’s photographs.

As you can imagine, we were all thrilled about Olivia having her photos featured on such a prestigious magazine’s website; Italian Vogue must be inundated with submissions, day in, day out. I’m bound to be biased, but ever since Olivia started taking photographs, I’ve always been amazed by her ability to bring emotion, romance, and an element of magic to her images.

Olivia took the photograph of Kwintus playing in the snow a couple of months after we were forced to retire him due to arthritis in his neck in late 2010. My daughter had left Switzerland for university in the UK in September, which is exactly when Kwintus made it clear to me that his job as a dressage schoolmaster was done, and that it was time for him to move on to enjoying life in the meadow.

Olivia hadn’t seen her horse for some time when she took the photograph, so it was a very emotional moment. Of course, the fact that it had snowed a lot over the previous couple of days, that the sky was bright blue and the air crisp, fresh and sparkling made the atmosphere even more magical. Kwintus clearly loved prancing around in the snow, playing chase with our two dogs, Leo and Tom.

Kwint has always been a bit of a show off and loves to be the centre of attention. He’s a real people horse; my trainer, Marie-Valentine, calls him Mr. Public Relations. I recently found out from one of his previous owners, Tamara, that he’d already had a stint at modelling and was once the “face” of Dengie Horse Feeds. Here he is with Tamara, posing for his dinner! 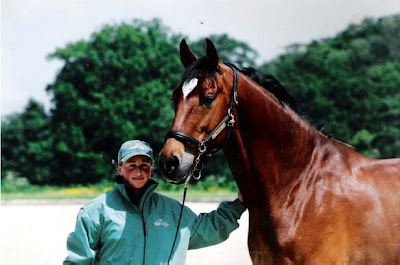 I showed a friend of mine at the stables Olivia and Kwintus’ Italian Vogue photograph earlier today, and she asked me if she could use it on her new website dedicated to finding sponsors for talented Swiss riders. Might Kwintus might have a new career in the works?!

Posted by Francesca Prescott at 8:51 AM

Wow--Kwint is sure a photogenic horse! And congrats to your daughter on her photography.

Well Kwint certainly is a handsome boy - ho wonder Vogue wanted him as a fashion statement! Your daughter must be so excited to have her photography shown off in such a prestigious place. I hope it bodes well for future photo shoots!

Laura, he's a cutie, that's for sure. He's really happy in Burgundy; I don't see him as often as I used to since it's a four hour drive, but I know he's well looked after and has a friend called Newton who keeps him on his toes. I have regular news from the lovely girl who runs the place, and also from my friend who runs a tack shop close to where I live. Her horse is also retired there, so we have good, regular feedback.

Olivia has some great photos on her website: check out www.oliviabossert.com

Thanks Jenj. You should have seen the online squeeeeeeeeeeees when Olivia got the news her photos were on the Vogue website! So cool!

That is very exciting news, Francesca - for you, Olivia, and for Kwintus. Wow! Congratulations all around to a talented photographer and a handsome, photogenic horse. **clapping**

Just wondering what signs he gave to indicate athritis in the neck?

One Hind: Kwintus had stumbling issues that got worse over time. He'd almost go down on his knees. It came from degenerative arthritis in his neck (can't remember exactly which vertebra it was). Very sad, because otherwise that horse is really in incredible shape. His legs are absolutely perfect.

What I'm amazed is how handsome and athletic he is at retirement stage. Perhaps he needs to pose for AARP magazine. I hope I will be as frisky as he is in my old age!

Congrats to Olivia. It is TOUGH to break into any magazine. What a wonderful thing to have on her resume.

Cesca, Congrats to Olivia for getting her photographs recognized by such a prestigious magazine. And your handsome Kwint may well have a new career at a horse model. Perhaps you could be his agent?

Alison, what is AARP magazine?! Sorry, maybe having a blonde moment...

What's amazing with Kwint is that his back hasn't sunk at all. His shoulders have a teeny bit, but he really is in great shape for a horse his age.