I start to get twitchy with excitement this time of year. It's almost time for the Kentucky Derby (May 5, 2012) and after that the Preakness, and then the Belmont Stakes. These are the three races that make up America's Triple Crown, although we haven't had a winner of all three races in 34 years (not since Affirmed in 1978.)

This Saturday marks the 138th running of the Kentucky Derby, and the long tradition, the venue under the Twin Spires of Churchill Downs in Louisville, Kentucky, and the many years I've watched this race make me look forward to it every year. 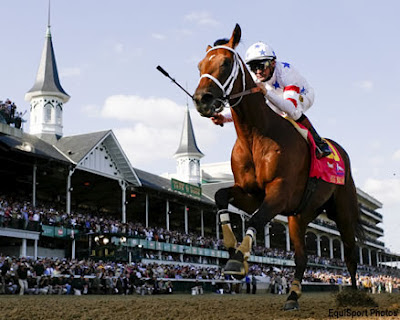 In fact, whenever I get my weekly planner for the new year, I automatically turn to the First Saturday in May and scribble "Kentucky Derby." Then I count two weeks after that and write "Preakness," and then turn to three weeks later and enter "Belmont Stakes." I want to make sure I'll be by a television set in order to watch those races.

Probably the long coverage of the sport by network television is what got me hooked on horse racing in the first place. Now, I get lots of channels on my TV, and I can also watch horseracing on TVG and HRTV. But when I was growing up, the Kentucky Derby was the only horse race that I ever remember being broadcast. And when the horses are led out onto the track, and the band starts playing "My Old Kentucky Home," and every one stands and sings along, tears come to my eyes and my heart starts fluttering in excitement. Every. Single. Time.

I know that horse racing has been getting some bad press recently. There have been expose articles published recently in the New York Times about drug use in horse racing (which some in the industry are trying to abolish.) And the lack of proper homes for Thoroughbreds when their racetrack careers are over is still an issue (tackled by one of our own here - Natalie Keller Reinert - see her Retired Racehorse Blog.) For me personally though, I cannot stand to watch horses jump. I used to watch show jumping, but now wince when those fragile legs hit the ground abruptly on the far side of a huge jump. At least in horse racing, horses are doing something that many of them naturally love to do - run fast.

If you also love to watch horse racing, here's the official list of this year's horses, and if you click on each horse you can read more: http://www.kentuckyderby.com/horses

If you are on Twitter (I am @LinBenson) you can get up-to-the-minute news by following the hashtag #KyDerby (lower case, upper case, doesn't matter.)

If you'd like to check the televised times on NBC and NBC Sports network (which will include the draw for post position on Wed. May 2nd, The Kentucky Oaks for fillies on May 4th and the Kentucky Derby on May 5th) here's a link: http://tvbythenumbers.zap2it.com/2012/04/30/nbc-sports-group-presents-14-and-a-half-hours-of-kentucky-derby-coverage/131432/

As for me - I'll be glued to a television somewhere, watching the twenty-horse field load into the gate, praying for the safety of the horses and jockeys, and as my heart begins pounding faster and faster, wait for the words "and they're off . . ."

I pretty much no longer watch horse racing due to all the breakdowns - I used to be an avid fan. That said, I was at the 1978 Belmont when Affirmed won the Triple Crown - an enormous thrill - and one of the highlights of my life was visiting (and getting to touch) Secretariat at Claiborne in 1989 just before his death. And I have one OTTB, Dawn, who goes straight back to Man O'War through War Admiral on her top line - so obviously I'm a TB fan.

Hope all the horses and jockeys make it through the series in good health . . .

I hope they all come home safely, too, Kate. I've been following closely the discussion about how US Thoroughbreds are percieved by some as not holding up as well as overseas horses, where drugs are (supposedly) not used at all. If we only raced the extremely sound ones, and bred for that quality, wouldn't the whole game be better off? It's a very huge topic (or can of worms, if you like) to discuss, but as a horse lover and admirer of TBs myself, I can only hope that more people talking about such things might eventually lead to change.

Linda, I'm looking forward to the Derby on Saturday, as well as the Oaks on Friday and all the other big races at Churchill Downs.

In Europe, supposedly they train with Lasix and Bute, but aren't permitted to race with them. I wish they'd ban these so-called "therapeutic" drugs on race day here. If the horse isn't able to run without them, he shouldn't run. But the industry is talking now, and that's a step forward. I miss the "iron horse" of the 60s and 70s when I started watching racing.

Although part of me enjoys the excitement of horse racing, in this country at least, I think the industry is dying. The combination of Eight Belles and Barbaro gave the general public the idea that horse racing is cruel (and sometimes it is), and that the animals are abused (and sometimes they are). Most people under 55 or so have never even watched a horse race or been to a track.

Until the industry cleans up its act and makes owners and breeders take some responsibility for the ultimate fate of the animals they bring into the world (meaning not dumping them onto slaughter trucks), this sport will never reach the heyday it had prior to the 70s.

Cleone - thanks for writing. I'm getting very excited, too. Anonymous - I do agree with you that changes need to be made, but I think as horse lovers, we can be part of that change, not only by bringing these things up, but also by keeping the love of horses alive in the public's eye.

I believe that some of the great racehorses we've had in recent years (especially the females - Zenyatta, Rachel Alexandra, and many more) have done much to shine a positive light on racing. And how about Rosie Napravnik's great win yesterday on a filly named Believe You Can? 24-years-old and the first female jockey to win the Kentucky Oaks, she's a great role model for every girl who dreamed of becoming a jockey (and that's everyone who ever saw National Velvet or read a Black Stallion book.)

I personally believe that the more people who become interested in horses in any sport will help to bring positive changes to our entire industry. We all want to help these beloved and wonderful creatures - Horses - get the respect they deserve. Nurturing the love of horses in people who might not otherwise have been exposed to them is a good place to start. So take someone to the horse races. Take them trail riding. This is not a mutually exclusive club, and anyone that shares their love of horses with others is passing on the torch, and probably helping horses down the line.

Okay, off my soap box now. Enjoy the race, everyone!

I will be in the middle of a wedding. So cheer the horses on for me.