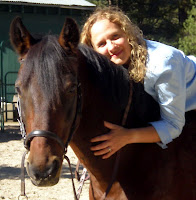 Angelia Almos. She formed a lifelong passion for horses at the age of five when she talked her parents into riding lessons. Horses often play a prominent role in her young adult fantasy books. She also write horsey nonfiction and space opera. She lives in the Sierra Nevada Mountains with her husband, two daughters, two dogs, two cats, and one pony (she often thinks of bumping that number up to two). 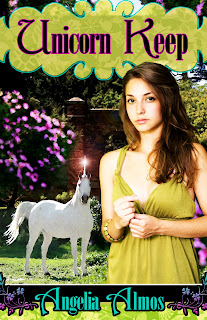 Angelia has a brand new book out called Unicorn Keep, and it's billed as young adult fantasy.
To learn more about it, you can visit her website: www.angeliaalmos.com

One of the cool things about writing young adult fantasy and horsey fiction is getting to put some of my beloved horses into the stories I’m telling.

My first young adult fantasy, Horse Charmer, featured my show horse from my teenage years. Kristy and I probably had the strongest relationship and bond out of all of the horses who have been a part of my life. I changed her name for the book, but the way she looked and behaved was exactly how I would have imagined Kristy if she could talk as Kali in Horse Charmer can.

My upcoming romantic suspense novel under my Angie Derek pen name will feature a cameo from the very first horse I took lessons on when I was five years old. Old Ben snuck into the book without me consciously choosing for him to be there, but once I remembered I had named him the same as that gentle bay gelding who started me on my path of horsiness, I knew the name was perfect. Made me want to give him a bigger part in the book.

When I came up with the idea for Unicorn Keep, I wanted to include another one of the many horses who had touched my life. Ginger, my family’s Shetland pony, had to be put down earlier in the year. She had been a part of my life off and on since I was fourteen years old, and we later purchased her for my own daughter. After her passing, she was in my thoughts a lot so it only seemed natural to put a spunky and sassy pony into Unicorn Keep. She kept her name, but I made Ginger larger than her true ten hands since my heroine was a teenager and needed to ride her through most of the book. Ginger got to shoot up two hands to the average Welsh pony height which I think she would have liked. Ginger’s personality was always bigger than her size.

Some of my favorite horse books growing up were the ones where the horses were just as much a main character as the hero/heroine. Battlecry in Battlecry Forever and Flame in the Island Stallion series come to mind when I think of a horse as being a major character. But horse stars aren’t limited to the printed page. The Black was popular enough to have two movies and a TV show made about him. Maximus from Tangled is probably one of the funniest horses on screen. I could go on and on naming horse after horse, but I’ll stop there.

Who are some of your favorite horse characters in print and on screen?
Posted by Linda Benson at 7:22 AM

I loved Fire's horse, whose name I can't remember now, in Kristin Cashore's FIRE. Of course Black Beauty, Merrylegs, and Ginger are my all time favorites.

My animals, past and present, find their way into my writing as well.

My favorite fictional horse is Smoky, in "Smoky the Cowhorse" by Will James. I also loved "The Island Stallion", though Flame is not quite as believable a character as Smoky.

Jayne - I adored Merrylegs. Such a cute and feisty pony.

Laura - The name Smoky the Cowhorse is so familiar, but I can't remember if I've read it before.

I love Marguerite Hendry's Misty of Chincoteague and all her other books! But the story I love most is the one about the Godolphin Arabian and his little stable boy (:

Hi Angelina, thank you for guest posting! i hope we'll hear more from you. I've read horse books all my life, but can not recall one 'horse' that has stuck in my head. (ah the fleeting memory as we age.)

Sherlyn - All the Henry books. I forgot about those. I remember loving the Arabian book.

My favorite has to be among these; The Maltese Cat (by Kipling), the ponies in Ponies Plot (by Parkinson, I think) or Black Beauty, of course. But I also loved Sham, Figure, Brighty, and the other Marguerite Henry critters. Especially Cinnabar- the 12 O'Clock Fox. Not a horse, but a great story of hers that gets overlooked.

Oh yes--I loved "The Maltese Cat", too! A great story and a great horse character.