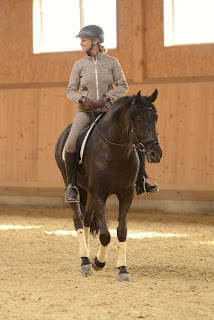 Driving back from the stables earlier today, I suddenly found myself overcome by an intense feeling of joy. I got a warm and wooshy sensation in my solar plexus, my eyes welled up, and for about ten kilometres or so I just couldn’t stop smiling. As an old friend used to say, I felt “lucky-lucky-lucky”, blessed on so many levels. Wow, I thought, I have a wonderful family, live in a lovely house with a big flower-filled garden in a beautiful part of the world, and every morning I get up and organise my day around riding my beautiful horse. What more could I want?

The feeling was so overwhelming that I’ve been feeling utterly blissed out ever since, despite having done laundry, cleaned the house, been grocery shopping, and taken my car to the garage to have my winter tires replaced by my summer tires. Even now, hours later, I’m still diamond-eyed and sparkly inside.

It’s not that I’m usually pottering around, mullen-mouthed and all woe-is-me, because woe-certainly isn’t me. Nor do I waft through life with a beatific smile plastered across my face, blowing kisses. Normally, I’m just, well, normal happy. You know, coasting along contentedly. The thing is, if I bobbed about keeping count of my blessings twenty-four-seven I don’t think I’d ever have the right to complain about anything, but, from what I’ve observed, normal people don’t operate like that, and those who do (or pretend to) tend to be annoying, don’t you think? Besides, there’d be drawbacks to living in a perpetual state of intense joy, such as streaky mascara, and a tendency to yawn a lot (maybe I’m weird, but when my solar plexus throbs it triggers my yawning mechanism). 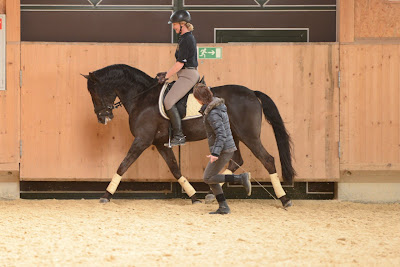 What brought on this abnormally joyous woosh? Frankly, I’m not sure, but it’s probably linked to spending time with Qrac, my Lusitano. Just thinking about him makes me happy. Oddly, today’s lesson with my trainer, Marie-Valentine, didn’t go wow-ishly well. Nor did it go badly. It was kind of standard, really. Qrac and I are improving steadily, it was a good, positive lesson, but there was no major breakthrough that might have triggered my sudden bliss: our trot-to-canter transitions still tend to be a little croupe-high, or croupe-out, or wiggle-wiggle-go-against-the- leg-to-escape-and-just-trot-faster. When I ask for canter, I’m still never a hundred percent certain I’m going to get canter, although Qrac’s positive responses to my canter requests are definitely increasing. The greatest improvement in the last few months is in the right lead canter: Qrac used to hate the right lead canter and would switch leads at the slightest excuse. This hardly ever happens any more, and there are days when I feel we’re both more comfortable on the right lead canter than on the left.  We can extend and come back into a collected canter without losing our balance, and we can super-collect the canter and sustain it for far longer than we could a month ago. Qrac’s muscles are building up week by week; I recently had to have his eight-month-old custom-made saddle refitted to suit his badass bulges. 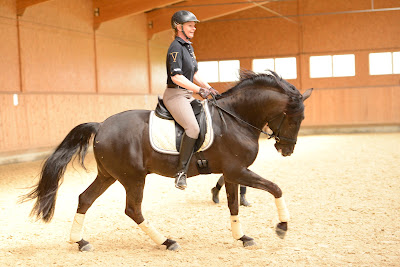 Maybe what got my gooey going today was the fact that we worked on a dressage program for the first time. I’ve mentioned umpteen times on this blog that I’ve never been particularly fond of competing, that my nerves tend to get the better of me, that I spend the entire pre-show night tossing and turning in a state of hyperventilative-sweatiness. So show-shy am I that I tend to need the bathroom just browsing the Internet for listings of potential dressage events that Qrac and I could attend. But lately, the topsy-turvy feeling I get in my stomach while browsing dressage competitions is beginning to feel a little more like excitement than just dreaded Draino-gut. And although I know we’re nowhere near ready to dazzle the judges with perfect circles (we’re brilliant at random sized egg shapes!), laser letter precision or flashy elevation, all of a sudden I just want to get out there and see what happens when I put Qrac in the show ring. So yesterday afternoon I printed out one of the lower level dressage programs and, this morning, handed it to Marie-Valentine.

After warming up and working on the usual basics, we did the program. I hadn’t had the chance to learn it by heart, so Marie-Valentine read it out loud, and Qrac and I did our best to follow her instructions. And you know what? It wasn’t too bad. Sure, we’re going to have to work on shooting straight down the centreline instead of wiggling a little bit to the left and a little bit to the right, and we’re going to have to improve our trot extensions (Qrac doesn’t have a natural extension in trot, so those diagonals are particularly challenging), and strive to ride ten metre circles and not giant eggs, and try to strike off our canter precisely at A and at C. And so on and so on and so on. I imagine it takes a fellow-dressage rider to fully understand how difficult training these simple things can be. I’m guessing that only a dressage rider can grasp the satisfaction of riding your first perfectly round eight-metre circle (I rode one about two weeks ago and was so delighted that once it was done I dropped the reins and pumped the air like I’d won the World Championships! Pff!)

When will be going to our first show (uh-oh, did I just feel a quiver of Draino-gut?!)? I’m aiming for early July, as there’s a nice one not too far from where Qrac lives, and I’ve been there before with my now retired schoolmaster, Kwintus, so I know my way around. After that I’ve jotted down a couple of potential follow up shows that will take us comfortably (?!) into the autumn, and hopefully get us used to going out and competing. Maybe competition nerves are a state of mind; if I decide competing is no big deal, maybe it could become my reality. Maybe competing could become fun…
Anyway, today, in the cosy afterglow of my blissful euphoria, nothing seems like a big deal, anything seems possible. All is right in my little corner of the world. I’m lucky-lucky-lucky.

How about you? What triggers your bliss? Have you felt lucky-lucky-lucky lately?

Posted by Francesca Prescott at 6:56 AM

Yep, Cesca, I know that feeling. And its a great feeling. I often get it on/after my trail rides, or just hanging out in my barnyard or wandering around my garden. I'm so happy and grateful for what I have. I think that's the basic way to joy--focusing on your delight in what you have, rather than on what you want (and haven't yet got).

Yay for you and Qrac! I'm looking forward to hearing about your adventures. And I can see how much better and more muscled up he looks in the photos.

Laura, I've just enjoyed spending the rest of the afternoon in the garden, planting new things (lots of roses! I just love roses), and pulling millions of weeds (ugh, weeds). You're right, happiness is all about enjoying the things we have. Could do with a few less weeds...!!!

Most people I know get a pretty good feeling late on a Friday afternoon when they can leave work behind for a couple of days. The kind of work where we've done our contracted weekly hours by Wednesday but have to keep going else some part of industry will grind to a halt.

Personally I felt good this Saturday afternoon riding fast across a rolling landscape on a mare who really wanted to canter up each hill and transitioned up, so it seemed, in harmony with my thoughts.

White Horse: I remember that Friday afternoon feeling, and I'm so thankful my schedule is no longer synched with a fixed daily workload, and that my time is mine to organize. Another thing to be grateful for.

I love the image of you zooming across a rolling landscape on an eager mare. I've not yet found any hills to canter up; the ground is too hard and we're not allowed in the fields. I've been told there are places to canter near where Qrac lives, so will have to go and investigate once the weather improves. It's been soooo wet.

Cesca, I love that first picture you posted of you and Qrac where you are just walking quietly seeming at peace. For me, since I trail ride, that's what gets me feeling lucky, lucky. How many people can hack around a field on a horse?

Good luck with future showing--don't let it get in the way of the happiness you feel with your handsome guy!

I feel very lucky to be retired, and to be able to spend my days riding my beautiful horse, taking care of him and his herd mates, walking my dogs and working in my garden.

You're right, you're very lucky, and you're very wise to realize it and feel it now, instead of looking back and wishing you had realized your good fortune while you still had it.

Thanks Alison, that "chilling" photo of Qrac and me is one of my favourites :).

I've been doing quite a lot of trail riding on him recently and we're both really enjoying that too.

Hi Redhorse, so nice of you to read my post. You sound as though you have a lovely, peaceful retirement. We're lucky to enjoy what we have and what we do. I took my dogs for a long walk this afternoon and we all enjoyed it. I didn't even mind washing them when we came back to avoid getting mud all over the house! Bummer about having to clean the bathroom though!!!