This spring has been a sad time in our pet family with Dozer, the senior Lab, being put down, Lacey, our very old cat dying under the pool in the big storm, and then on Monday, Jake, our rescue mutt, having to be put down. Jake had changed from an energetic oldster (12) to an ailing oldster in a short amount of time. Initially we thought it was Lyme disease. Even though he had been vaccinated, it is not foolproof, and we began treating him with antibiotics. The vet found no abnormalities in his blood work, but when he sent us home, he said, "Let's hope it's Lyme. If not, it's probably something worse."

It was something worse. Jake quit eating, he began throwing up, and a second trip to the vet showed he had a huge tumor on his spleen. We asked the vet if we could put Jake in the car as if he was going home, and he euthanized him there. He died with his head on my  husband's lap.  Jake's death left a huge hole in the family and my heart. He'd been a challenging rescue, but he'd also been my shadow. Fang, aka princess Chihuahua, was left with no dog buddies, and I knew I better find another dog to share our lives with before school started and we had less time. 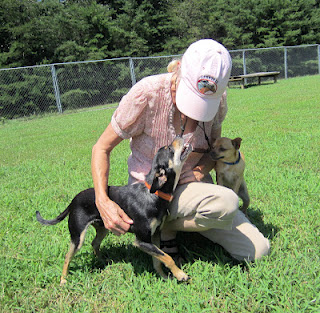 Meet Ziggy. Part bat (check out his ears in the photo below), part mini-pin, part Chihuahua. He came from Caring for Creatures, a fabulous rescue organization that plucks dogs and cats from high-kill shelters before they are put down. Ziggy's  time was up. He is only one-year-old, he was at CFC for six weeks, and at least a month at the shelter where he came in as a stray, so I can't imagine what his brief life has been like. Fang and I met him at CFC (above) and although I knew Ziggy would be challenging because he was shy and afraid of men, we brought him home. 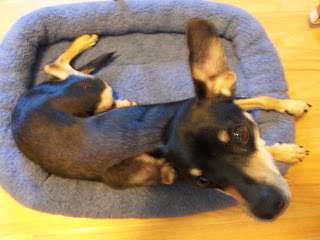 It's been four days, and I've learned quickly how to be leader of the pack to help reassure Ziggy that he is safe. Here he is resting after his fifth walk (and it's only lunchtime!) Fortunately, he's smart and learning quickly. Challenges are house-training--I haven't picked up on his "I need to go" cues--despite all the walks, and 'stranger' issues. He's super-sensitive to sounds and sights. I have no idea how he coped at the busy, noisy shelters.  But I am learning what he needs, and he's learning all the rules that I (leader of the pack) have set down, Fang loves playing with him (growls added when he gets too rough), he loves my daughter, and he and my husband are slowly bonding.

Now if he can just find that CAT. 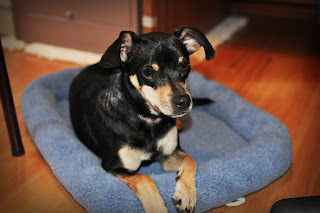 If anyone has a mini-pin, please send ANY suggestions on training. I have read they can be a handful. Ziggy seems to have enough of something "else" in him that he is eager to please, so my fingers are crossed. I do get the feeling he can  never be allowed off-leash (Fang, aka princess, never has to be on a leash so I have been spoiled.). If he spots something moving, he wants to be after it in a flash.

Thank you for letting me share one more depressing "pet death" story, and I hope next post, to have  great news on Ziggy's adjustment.

Alison--My little rescue dog has those bat ears, too. She's part Chihuahua and part terrier and part ? No min pin though, I don't think. I don't really know much about them. Star, our little dog, is VERY smart and also stubborn and determined (as befits a terrier). Her call back is pretty good but not perfect--we don't have to put her on the leash unless we're out in public. She is a great fetch dog, and that gives her a good outlet for her energy. Does Ziggy like fetch?

Ziggy loves walks and sniffing and shaking his stuffed animals. No fetch yet. (I think that is a terrier thing.) I hope one day he can go off leash like Star and Fang because it's tough to do barn chores with a dog leashed to your belt. Does Star ever chase something and get lost? That would be my worry!

Star will come back if I use my "terribly stern" voice--even if she is interested in something else. I wouldn't trust her recall near traffic, but its good enough for here on the property. We did have to work at it. Treats for coming, and being pulled in by a long line (like very light clothesline) when she didn't come, and (occasionally) being chased with a squirt bottle by the one who was NOT calling until she came to the one who was (this did not happen until she was very secure here). Now, having been with us over a year, she's pretty reliable.

Oh good luck, Alison, with your new addition. Sounds like you have had "challenging" dogs before, and with time and effort, their turn-around can be really rewarding.

I have a dog that needs lots of walks, too, and the plus side is that it forces me to get up and walk also. (And I can use the exercise.) Best of luck with all of your critters fitting in and bonding, and thumbs up to you for rescuing another animal!

Thanks Laura, for the suggestions. I have heard of the clothesline trick before but not the squirt bottle. Somehow I can't see my husband cooperating on that one!

Linda, I know you had a challenge with your one rescue and 'cats.'

All training suggestions are welcome.

I wouldn't use the squirt bottle trick unless the dog was securely bonded, as I said. In our case, my husband called and I squirted, as Star was most bonded to me. It was very effective. Star is not very food motivated, so treats weren't terribly effective. And she is smart, so she soon knew whether she was wearing the long line or not. She'd come back if she was wearing it, and ignore us if she wasn't. The squirt bottle convinced her that ignoring the call was not an option, even if she wasn't on the line. And this was important, as through traffic is not an issue here, coyotes and bobcats are (with a small dog). I'll look forward to hearing more about Ziggy.

What a great blog! I'm now a new "fan"! I did not need another sad story - but it helps to know that others have shared the pain~