Like I am sure most of you, I am obsessed with the Olympics and can’t keep up with the recorded coverage on my DVR. I can’t even watch the news for fear that they might announce the results of something I have not watched.

Of course the Eventing coverage has figured prominently in my attention. I am disappointed that the U.S. has not done better, but how about that Mark Todd. He is ageless and is clearly riding as well as he ever has which is saying something since I believe that he is perhaps the greatest Eventer of all time. At 56 years old, London is the sixth Olympic team he has been named to and he remains the only equestrian to ever win back to back Gold Medals on the great horse Charisma in 1984 and 1988.

For me, the other great story is Ingrid Klimke being tied for the lead going into stadium. Ingrid Klimke is the daughter of Reiner Klimke, the most decorated Dressage Olympian of all time with 6 gold and 2 bronze medals. Talk about Olympic equestrian DNA. Actually, it was watching Klimke, senior, at the 1984 Los Angeles Olympics that first started my fascination with Dressage. I was lucky enough to have front row seats when he won the gold and I was merely feet away when he took his victory lap performing flawless piaffe/passage transitions one-handed while waving to the crowd. I was hooked at that moment. I was amazed and determined that one day I would learn how to do that, so now that Uiver and I are learning piaffe/passage transitions, I think of that moment on occasion. 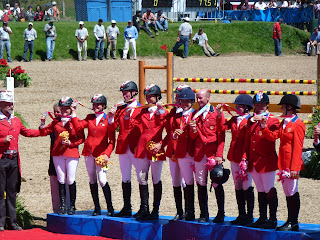 A sad result from the Eventing Cross Country today was the fall of Hawley Bennett who competes for Canada on a horse named Gin & Juice. I got to know Hawley a little bit last October when I went to the Pan Am games in Mexico with a friend whose horse was being ridden in the games by her Son in Law, James Atkinson. James also competes for Canada so we were all honorary Canadians that week. 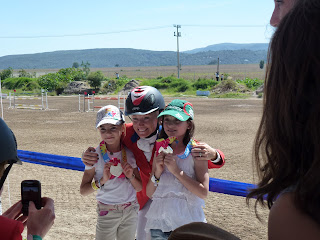 Hawley is a lovely person who cares passionately about the horses and her sport. Even though she is Canadian, she is headquartered in Southern California just about at hour away from me so I often see her riding and coaching at Horse Trials. She never fails to be gracious and kind to fans, especially the kids, and is well respected by other riders. Reports on the internet say that her mount “Juice” is fine and Hawley will be fine but remains in the hospital tonight with a concussion and a stable sacral fracture. I know that Hawley is one tough cookie and that she will bounce back, but I a sure that she is disappointed that things did not go better.

Well, back to the TV I go. I can’t wait for Dressage to start! How about all of you?? What have been your highlights so far?? I am going to be more sleep deprived than usual but I am determined to watch as much as humanly possible.

You will be glad to hear I expect, that Hawley texted Ian Stark the BBC commentator, to say that she's sitting in bed in the hospital and listening to the coverage!

such a shame about the Japanese lad who was leading after the dressage - he just got popped out of his tack over that drop. Hugely impressed by the Swedish horse Wega, incredibly classy animal and so good over all 3 phases. Was disappointed that Boyd had to withdraw- was looking forward to seeing his horse jump - such a character and such a good pathfinder.

Haven't been able to watch any of the horse coverage because we have basic cable and NBC won't allow you to watch online what you can't watch on TV. But supposedly I will be able to watch the show jumping finals. I would have loved to have watched cross-country. That has always been my favorite.

I have had a BLAST watching live on my iPad. Never in my life thought I'd be so happy we have Charter (aka the Evil Empire) for TV and Internet! I watched lots of eventing dressage, lots of XC yesterday, and the top 10 in stadium today. The latter two events were largely taking place while I was at work, so I was sneaking in my viewing. I'm sorry, it's the OLYMPICS!!!

I am extremely impressed with the Swedish horse, and my heart breaks for his nice-looking lady rider who clearly - along with the rest of us - thought she had it in the bag right up until the last possible second. ARGH!

I'm also impressed with Karen O'Connor and Mr. Medicott. He is a terrific horse who I would never want to sit on - looks to be a MAJOR handful. She does a masterful job with him. Another horse who looks like trouble is Mary King's boy. But if anybody can wrestle these talented beasts around, it's those ladies!

My other favorite, I have to admit, was Zara. I've never much liked her as she seems to have inherited her mum's jolly personality *snark* but boy, she did a fantastic job. So nice not to mess up in front of the home crowd.

I hope NBC shows a wee bit more of the Equestrian tonight in prime time. I was thoroughly disgusted when their XC coverage amounted to <1 minute. What the heck? Even complete non-horse types have to find THAT pretty interesting!

I've been recording it and watching when I'm conscious. So much coverage! So much to watch! So far, my favorite has been the cross country, although I can't really tell you why. Maybe because of the sheer bravery. The horses must trust the riders. The riders must have a clear focus on the path they need to ride. It's been amazing.

Thanks especially focus on Ingrid Klimke. She's a long time favorite of mine. The comments and updates are great too. Such a fabulous sport and wish accidents didn't hurt!

I have a part time job that requires some sleep through the night, so I can't watch it "live" or what passes for "live" on NBC. I don't want to DVR and have to fast-forward through five hours and 58 minutes of "other stuff" to get the two minutes (with commercial) of horse stuff. DID manage to catch a squib of Jan Ebeling being interviewed about being a 53-year-old "overnight sensation" at the Olympics (his first Games).

I have DISH but don't have a DISH account to log onto (its website is SO user-UNfriendly I don't pay my bill online through it; I called the 800# and spoke to some outsourced staffer named "Kevin" operating in a beachfront EZup in Outer Howloon and arranged for automatic payment THAT way).

SO, to avoid the frustration that comes with EVERY Olympics, I am going to spring for the DVD when it comes out and watch uninterrupted coverage of EVERYTHING.

I haven't been watching as I don't have a TV--I know, its shocking. But I do listen with interest to the updates I hear on the internet. I have to say, in the past I have had a hard time watching the cross country without praying that all horses and riders get through it safely. It looks very uhmm, challenging, to one who has never done it.

I loved watching the cross-country the other day, they are such LIONS!!! I'm such a chicken in comparison, I mean, trotting poles is jumping to me!!

But I'm very frustrated today as nobody is airing the dressage. What the heck? I thought I'd found a German channel that was airing it and set my tv to record it, but I guess I don't have that channel. So annoying. I'm going to go and see if I can find something on the Internet that I can stream, even if it means paying for it.

Congrats on learning the piaffe/passage transitions! Qrac and I are not quite there yet...

Hmmm...maybe I made a mistake and the dressage is tomorrow??? Must go double check!!

H'hmmm not that I generally advocate shenanigans, but for those of you in countries with bad coverage, *cough*NBC*cough* I gather that if you have firefox as a browser, you can use an add-on called stealthy and make your ip address appear to be from the UK, which will let you have access to the BBC online streams & catchup coverage.

Terri--it has to be extra special when you watch riders and horses you know. I must confess I have watched none of the equestrian events. And I have a TV (unlike poor :) Laura)