A Blast From the Past

The Tevis Cup, the 100 mile/one day ride through the rugged Sierra Nevada Mountains in California, was recently completed. Held in July or August on a weekend nearest the full moon, I did this ride many years ago, and I always get nostalgic this time of year just thinking about it.

I rode it on my good horse Daniel. Although the vast majority of endurance riders prefer Arabs, Daniel was a half-mustang, half-quarter horse gelding that I had bought as a green broke 8-year-old. He was dark palomino with a lot of dun factor, including a salt-and-pepper mane, a line-back, and even some faint zebra-striping on his legs. I'm sure his coloring, as well as his toughness and surefootedness was inherited from his mustang mother. 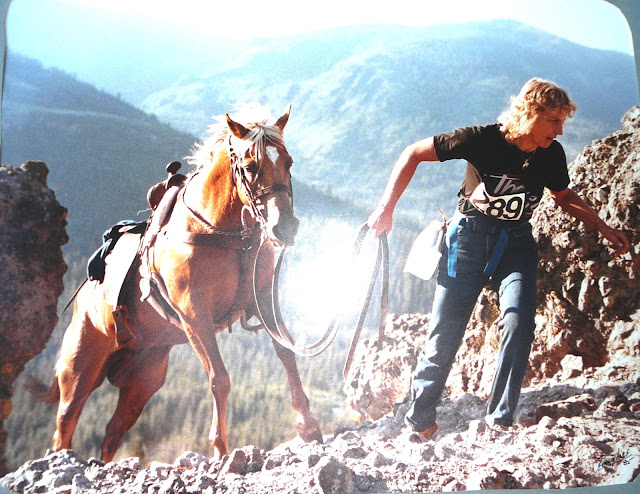 The year was 1985 (well of course it was, check out the permed hair.) This was long before everyone had a digital camera, so this a photo of a photo (excuse the poor quality) of Daniel and I going over the iconic Cougar Rock. The trail narrows to a steep climb up a solid granite rock right here, with an insane drop in any direction, and professional photographers are positioned here to take a picture of you and your horse scrambling up the rock. Well of course everyone wants to RIDE up the infamous Cougar Rock (because it makes for such a cool pic) so I wanted to tell you the story of why I'm walking up it (which about half the riders, and anyone with any sense, would do.)

Actually, my girlfriend and I had completed this trail a couple of weeks earlier in three days, riding about 30-35 miles a day, carrying all of our needs on horseback and camping out. We not only had a blast, but Daniel had carried me right up this rock like the trooper that he was. He was sure-footed, I totally trusted him, and he had never refused to go anywhere that I pointed him. Which explains the look on my face in this picture. Do I look determined? No, actually, I was totally pissed at my horse right here, and calling him many names that I cannot print.

After a mad dash out of camp at 5:15 in the morning, and long-trotting up the slopes of Squaw Valley, followed by a narrow trail that winds around and over creeks and timber, there was a bottle-neck of horses at about the 27 mile marker, waiting to climb Cougar Rock. Unlike earlier, when our forward motion carried us right on up, Daniel had time to think about it while we waited our turn. Perhaps he remembered how steep it was, or maybe he knew how many more miles (73) there were on the other side of it. At any rate, when we approached the rock, my darn horse spun around about ten times and refused to go up it.

Now of course anyone with half a brain would have bailed off and just led their horse up, got to the top safely, remounted and proceeded. But no. Puffed up with cowgirl pride, I walloped old Daniel a few good ones, not wanting him to get away with anything. I could hear the titters and sighs of the other riders around me, waiting for their turn, while I took this moment to school my horse. In just a few minutes, Daniel decided to charge up the rock, just like he had brilliantly a couple of weeks ago. With a smug look on my face, I leaned forward and grabbed his mane to help him balance. But when he got about 2/3 of the way up, at the steepest, scariest, most treacherous spot, my horse spun around again, and started back down the rock. Eeecckkk.

With youthful agility that I don't possess today, I jumped off him, amazingly didn't fall, grabbed the reins, and led him on up, narrowly averting a huge disaster captured for all time by the professional photographer sitting above us to our right. At the top of the rock, I jumped back on my horse, and it took about ten minutes (and a lot of bad words) to get my emotions under control. I decided that since we still had so far to go, I could not mentally be mad at my horse for all that time. So I collected myself, with difficulty, and continued. Whatever happened on that rock was in the past, and we had a lot of trail in front of us. And Daniel did perfectly during the entire rest of the ride.

Did we finish the entire 100 miles? Well, yes we did. Did we receive the coveted silver buckle for finishers? To find out, you can read the post I wrote about it right here.

Training for, and riding the Tevis Cup was one of the most exciting times in my life. Endurance riding is a lot of fun, not only because of all the beautiful country you get to see, but because it's really rewarding to get your horse very fit and tough. I totally had a blast doing it, but wanted to share with you the real story behind this picture.

For more about the Tevis, visit their official site right here.

Are any of you endurance riders? Tell us about the rides that you've been on.

That is some rugged ride, Linda. I bet you look back on that now and wonder how you ever did it, like we all do when confronting our younger selves doing stuff we're a wee bit too stiff and creaky to contemplate now.

Ah yes, Maggie. I'd do it again tomorrow if I thought the old body could handle it. Nothing better than longtrotting a horse through the mountains.

Nice story. I've never done an endurance ride and am not sure how my horse would feel about it anyway. I love going up steep hills and trails and have a favorite one where my horse is stabled.

It's a great picture. Until I read the story, I thought you looked focussed, but I can see the seething rage when I look again!

Patricia - yes I understand the joys of mountain riding, too. Martine - they say a picture is worth a thousand words. So I thought this one definitely had a story to tell. ;-)

Oh, Tevis is on my list. I was hoping for next year, but had a setback with my mountain horse. My other horse (nicknamed Ass, Butthead and Cartman - ie "Screw you, I'm going home") would do exactly what Daniel did and probably quite a few miles before Cougar Rock.
I've crewed for Tevis and absolutely must ride it soon.

That is an awesome story! Tevis is definitely on my list...perhaps not with my current horse, but eventually I WILL get there.

GSMarlene - you made me laugh with your names for Horse #2. Yes if you've crewed for the Tevis, you've definitely gotten the bug. Good luck next year!

AareneX - I hope you get to do it, too. It definitely takes a lot of preparation and training, but that part of it is a lot of fun, and a lot of miles. Daniel and I did two 50 mile rides before the Tevis, and he did great. They were not nearly so demanding. You know what they say - it takes a year to train them physically for the Tevis, and at least two years to train them mentally. (In my case, I probably could have benefited from another year or two of mental training myself. LOL)

Wow--Linda, I didn't know you rode Tevis. That is quite an accomplishment. And yes, those of us who are old enough remember that EVERYBODY had permed hair in 1985. I certainly did (!)

LOL Laura. Yep. Technology has come so far since 1985. You can now go to YouTube and watch tons of riders going over Cougar Rock, including this 10 minute video with lots of other near-wrecks: http://www.youtube.com/watch?feature=player_detailpage&v=hjsvjAI-Wcg Yikes.

What a great photo and story. 100 miles in jeans, now that I can't imagine! Many Tevis riders have a standard going over cougar rock photo, yours is unique! I crewed this year (the ride is practically in my backyard) and was impressed by every single rider attempting the feat.

People call ME crazy? All I do is get on Thoroughbreds and gallop them around. All I do is hop on a Percheron and ride him down a city street. YOU, MADAM, ARE CRAZY. (I say that with a grin and love and amazement.)

Cougar Rock is among the Top 100 Things That Scare Natalie To Death, sandwiched somewhere between Wolf Spiders The Size of My Head Which Cannot Be Killed and high fructose corn syrup.

You are my new hero. You are Superwoman. I am a wuss.

I love the photo of you two! I'm glad I am not the only one who sometimes loses it and must take many deep breaths . . .