Two summers ago I had the pleasure of taking a horse to Saratoga Springs, New York, to run a race at the town's storied track. I went the groom's way, in the back of a NYRA horse van, brushing hay out of my face and looping my arm through a lead shank so that I wouldn't fall out of my folding chair should the driver hit the brakes suddenly.

That night, I slept the groom's way, too: on the floor of a dorm room in a nineteenth century house adjacent to the receiving barn, up again at four thirty a.m. to the sounds of hungry racehorses. We ran a horse that afternoon and were back on the van for New York City that night. It was a little bit of a whirlwind visit.

This year, my husband and I snuck away to Saratoga for three days, traveling by MegaBus instead of by horse van. I know a bus may not sound glamourous, but let me tell you: for one dollar up and four dollars back down, we rode the three and a half hours to the Spa in style, lounging on the top-floor of a double-decker bus, eating bagels, reading, playing Words With Friends, tweeting with abandon because there were electric sockets right at our seats and we didn't have to worry about draining our phones, and generally having a wonderful time while someone else dealt with traffic and tolls and gas prices.

It's a pretty fabulous way to travel.

Everyone should have a town that is designed solely for the purpose of celebrating their personal passion. Baseball, knitting, aerospace, Polish country dances, whatever it is that you're into, I hope you have a place you can go where everyone is living and breathing that one pursuit. Now, I don't know what they do for fun in Saratoga all the other seasons, but in the summer time, racing is king, and this is a town built around worshiping the racehorse. In other words, my kinda place.

We stayed at a great hotel which I will not tell you the name of unless you email me and ask me nicely, because I want to make sure there are still rooms available next summer. Let me just tell you that it was right downtown and an easy walk to everywhere we wanted to go in Saratoga! Since we're farm people/Brooklyn people we walk everywhere anyway, and can't stand cars unless we absolutely have to go in one, so this was a huge point in Saratoga's favor!

While we were there, we took in the Fasig-Tipton Select Sale of Yearlings, home to the million dollar babies: 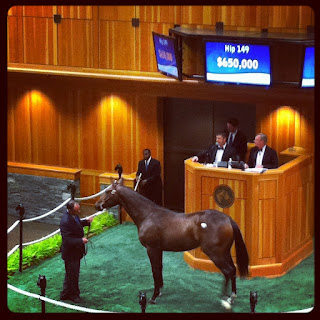 We visited the National Museum of Horse Racing and Hall of Fame, AKA The FUNNEST MUSEUM EVAH, and met a super-giant statue of "the Biscuit": 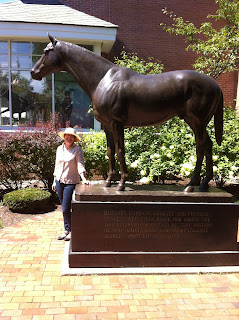 We met some local residents, including this dapper young man who was so hell-bent on having his ears rubbed that I forgot I was wearing a black shirt and had a dining reservation at a very posh restaurant within the hour: 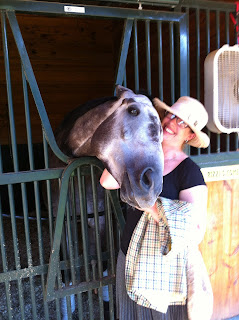 We spent a great deal of time leaning on the paddock rail, watching exchanges like this: 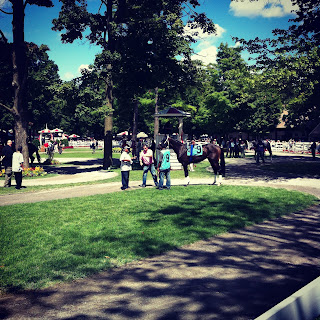 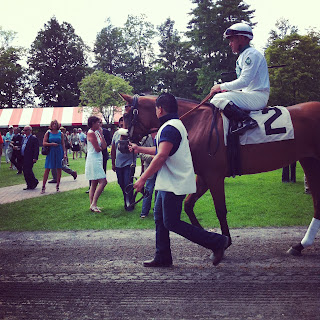 And drinking enough of these that the bartender at the Post bar learned to say "Two juleps?" before we could so much as lean elegantly on the bar: 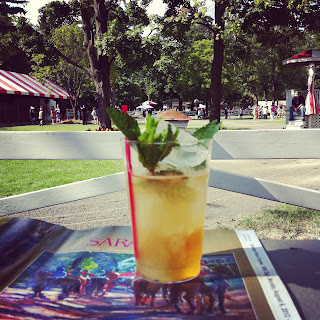 When going to Saratoga it's important to uphold old traditions, like dressing up for the races, so I found these fabulous western shirts at a vintage store to wear. My favorite one is in the Saratoga colors of red and white... I like to match my surroundings: 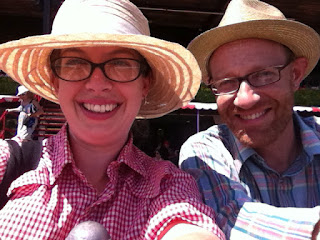 The whole trip was so amazing that it jump-started work on my follow-up novel to The Head and Not The Heart, and I was able to sit down at a bar and brainstorm a brand new outline for Other People's Horses. Possibly the most fun part of this outline: it's written in the "notes" section of our Fasig-Tipton Select Sale of Yearlings catalog. You know, for all those million dollar babies we're going to buy.

I've also started a Pinterest board dedicated to all the beautiful images from Saratoga and Ocala that will part of Other People's Horses. You can follow it here: http://pinterest.com/nataliegallops/other-people-s-horses/

Saratoga is still going strong through the rest of the summer. Check out TV listings for some of their big stakes races or watch on cable... even on TV, you can see it's the most beautiful racetrack in the country.

Posted by Natalie Keller Reinert at 4:00 AM

Great photos! I very much enjoyed my "virtual" visit to Saratoga--which is fun, cause I doubt I'll go in real life, it being on the opposite coast and racehorses not my passion. But I do remember the thrill of going to Bay Meadows as a child with my grandfather--its a memory I'll never forget. There's just something about the track...

Wonderful story and pix! Thank you:-)

Thanks, Natalie for sharing your pictures. Saratoga looks so beautiful, with its historic nature and gorgeous grounds. If you ever travel to the West Coast, I'd say that Emerald Downs in WA has an awfully pretty setting, with Mt. Rainier rising in the background. But Santa Anita in Southern California is my favorite track, especially if a slight breeze has cleared away any smog, giving you an unobstructed view of the San Gabriel Mountains from the grandstands. Quite lovely.

Wonderful article, Natalie. As usual, your words made the whole scene come alive, and then some.

Sounds like a dream horse vacation, and to be able to work on a story (even if it's in your head) is icing on the cake!

I went to Saratoga for a reading convention--not nearly as exciting.

Lovely post, Natalie! I've only been to a racecourse once, last October, in Hong Kong. It was exhilerating! The noise level when those beautiful horses flew down the home stretch was absolutely mad.

Sounds like you had a great trip. I loved the photos!

Man, commenters mentioned several tracks I'd really like to go to...

Santa Anita is top of the list, I hope to make it there very soon.

But Emerald Downs sounds fun and has my mate Lezlie there to visit :)

And Hong Kong.. I would love to catch the racing in Hong Kong.