Book Reviews and More on Promotion 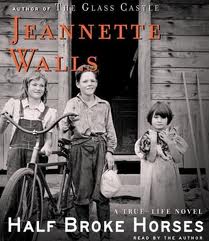 Promotion is on my mind these days because I am not doing any (which means a nagging voice in my head keeps saying "you need to be promoting your books . . .") and books are on my mind these days because the nights are getting darker earlier so I have more time to read.  I am almost finished Half Broke Horses by Jeannette Walls, a novel based on her feisty, horse-breaking, horse-racing grandmother.  It's a great story as is her memoir The Glass Castle, which does not involve horses, but is captivating nonetheless. Neither, however, need promoting or reviewing by lil' ol' me. The Glass Castle had 2,035 reviews (almost all five stars) on Amazon, is an international bestseller and has been translated into twenty-three languages. Half Broke Horses is on the New York Times Book Review Top 10 Best Books list and received rave reviews from topnotch sources, so nudges from me would mean nothing.

Along the same lines, I read Susan Richards two memoirs Chosen by a Horse and Saddled: How a Spirited Horse Reined me in and Set Me Free. Both are excellent reads and both have horses as main themes and threads throughout Richard's life as she deals with her childhood and adult issues. Chosen by a Horse had 223 positive reviews on Amazon. Saddled also received major kudos except for one person who wrote that it was "self absorbed drivel." (Well, that was blunt.) So again, me telling you to read them if your haven't will not affect either book's already best-selling status.

Reading them does have me pondering my own lack of best-selling status. I have written over twenty-five horse books and none have come anywhere near a hit. Many of quietly gone out of print (Yeah, I know, I should be resurrecting them into ebooks). The most reviews on Amazon are 71 for Shadow Horse, which is still selling well since 1999 (meaning I actually get royalties and Random House hasn't remaindered it).  About once a week I get an email from a starry-eyed horse-girl who has read both Whirlwind and Shadow Horse and desperately hopes there will be a sequel. Alas, I tell them, Random House isn't interested in a sequel because Whirlwind, despite good reviews and some loyal fans, hasn't sold enough to pay back my advance.

What makes a best-seller? What makes an award-winner? What makes people want to pick up your book? It's not simply great writing-Twilight disproved that theory--or excellent research or a compelling heroine or a satisfying mystery. So what is it?

Pondering these questions is not in the form of a pity party. But the magic answer has eluded me for over sixty books and thirty-five years of publishing (yup, I am that old) and I wish I had the answer. Not for me. Since I am winding my writing career down, I am finally absolutely positively certain I will never have a best-seller. (I kept hoping until about two years ago when it finally dawned on me that I didn't care anymore.) I would love to know what it is that gets a book reviewed by multiple sources as well as what it is that keeps a person reading all night and then suggesting that book to a friend who suggests it to another who . . .

What are your thoughts? What best-sellers have you read that were disappointing? What 'quiet' book would you like to recommend?

I absolutely hated "Angela's Ashes." My MIL had sent me her copy, raving about how great it was. I found it to be one of the most depressing books I ever had the misfortune to read. I only finished it because I kept thinking something good had to happen (wrong)
I think the secret to Harry Potter's success was that the author made every chapter a cliff-hanger. You had to keep reading to find out what happened.
I don't read current books very often, preferring to pick them up second-hand. I love when I find a series that already has several books published so I don't have to wait for the next one.

Alison--That was a thought provoking post for me. I have always known that my choice not to do much promotion was going to result in non-best-sellerdom for me, but I have known many who promoted a lot and ended up in the same place I'm in. However, the ones who are best sellers ALL promote a lot. I have read many "bestsellers" I thought were absolutely awful. I'm not sure what causes some dreadful books to catch on. But I have also loved some of the bestsellers, like the Harry Potter series. I also think, be careful what you ask for. At this point in my life, I'm quite honestly grateful that fame/best sellerdom did not come my way--I wouldn't have liked it. I wouldn't mind making just a little more from my mystery series though(!)

Ms. Martyr--we had the same thoughts about Angela's Ashes. I kept thinking "just kick the bum out" about the father. And I must confess I haven't read one Harry Potter!

Laura, you and I are so alike. I would have hated more school visits and books signings. But it sure would be nice to have more royalties to pay the bills. :)

This was a great post, and asks so many of the questions that are so relevant to writers. I've been reflecting on this a lot lately. Like you, I have had 30 pony books published over a long writing career, but mostly in translation so not many in the UK where I am based. This means that now I am starting to publish my backlist direct to kindle it is like starting from scratch as a new unknown writer. And how to get noticed amongst the enormous volume of new books being published every day? It really is tough. I don't know what the answer is - wish I did. I am working my butt off to promote my kindle books, especially as I am donating all my royalties to Redwings Horse Sanctuary, and will review things in Jan 2013 to see how things pan out.