Remember that old song, Monster Mash, by, err, Bobby Boris Pickett and the Cry (I had to look that up!)? Well, something tells me that this blog is going to be a bit of a monstrous mash up, somewhat reflecting my life over the past few weeks. Also, that silly song has been stuck in my head for weeks; hopefully I can rid myself of it this way!

The last time I posted my car had just broken down in a sudden loud kaboom on the motorway, scaring the bejesus out of me, and leaving me stranded on the side of the road in a heat-wave in insane traffic. Well, that car is now officially defunct (basically, the engine blew up and would have cost a fortune to fix), and after weeks of umming and ahing over what to choose as a replacement, I now have a beautiful new shiny black Volvo V60 with enough power to pull my trailer. I got it Tuesday evening, and I’m thrilled. It’s automatic, diesel, AWD, and has a great stereo! Oh, yes, and it talks to me, too! Like, if I want to go somewhere, or call someone, all I have to do is tell it where I want to go, or who I want to talk to, and bazzoom bazzam, my wish is my Volvo’s command. Amazing!

I’m really hoping these shiny new wheels will mark the end of a tumultuous few weeks, as I’d really like to be able to get rid of the crick in my neck, presumably brought on by an accumulation of stress and mishaps. My seventeen year-old son had ACL (knee ligament) surgery for the second time in a year (same knee, too – man, is he grumpy!), my daughter contracted a particularly virulent form of food poisoning that took three rounds of antibiotics to eradicate, leaving her nauseous and three kilos lighter. Meanwhile, the dogs picked up some nasty little insects called “aoûtats” and began tearing out the fur on their feet, and from one day to the next Qrac went schizo whenever I asked for the right lead canter. The osteopath came; apparently my horse had blocked his hips, possibly by getting stuck or bumping himself in his stable. He seems fine now, but there’s still a hint of discomfort in his right hind, so I’m getting the “magnétiseur” (healer) next week to check him out. Dear me, I think I need to plant a money tree…

And I’m clearly on a yippedy-skippedy roll as the bummer-fest continued today, serving me with another minor but nevertheless annoying setback.  I was supposed to trailer Qrac to the farrier, hauling him with my new car for the first time. Of course, when I went to hook up the van I realized that the plugs weren’t compatible, so had to cancel my appointment on an hour and a half’s notice. An hour later I solved the plug problem by buying an adaptor from a nearby trailer garage, so I could take Qrac for his Louboutins next week, but I’m so knackered that I’ve asked my farrier to send me his ex-trainee to save me the trip. He’s shod Qrac before, when snowy roads or gale force winds prevented me from driving up there, and he does a really nice job. Sometimes you just need to slow down, don’t you think? 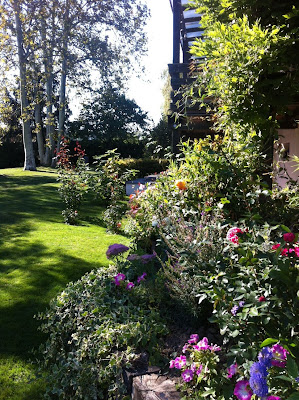 Speaking of slowing down, it’s Friday afternoon, the sun is shining, the temperature is pleasant, and my garden is looking all lush and ripe and mature, and since the windmills of my middle-aged mind kept me awake for most of the night, I might steal a quick siesta on the terrace before going to collect my son from school. Later on I intend to make a thick, creamy, comforting pumpkin soup for dinner, to be enjoyed with a glass of wine, some nice bread and cheese, and followed by a quiet evening with my husband, a DVD and my latest crochet project (I’m making a blanket).

Gosh, that sounds kind of boring and sedate, doesn’t it? Well, since I can recall Monster Mash climbing the charts on Radio Luxemburg, I’m definitely no spring chicken. And there’s something calming and satisfying about knitting and crochet. And, heck, I don’t know why I’m trying to justify myself!


Besides, look what I just made! 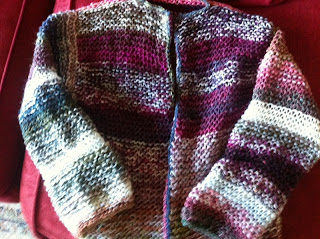 And check out my WIP blanket! 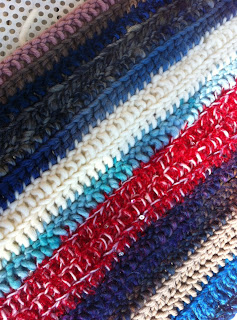 How are you doing these days? Has life been testing your patience? Frazzling your nerves? Cricking your neck? Or are you enjoying smooth September sailing? I hope so.

Posted by Francesca Prescott at 8:12 AM

Cesca--Enjoy your glass of wine! And your garden is lovely. I hope that your autumn is as smooth and pleasant as the tail end of summer has been chaotic. You deserve a little relaxing time.

Thanks, Laura. Things are fine, really, when it comes to the big picture! Just needed a little rant...!!!!

Love your garden photo--it's funny how so many of us 'vintage' gals love horses AND flowers.

Kid problems never cease either. I'm sooo sorry to hear about your daughter and son. I hope they both recover.

My neck isn't cricked but I buggered up my knee. It's the first time I've done such a thing in 62 years, so I guess I can't complain.