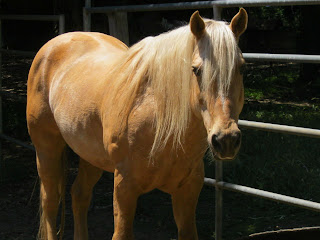 Hi Laura, I think you've twigged it! Funny that it should take solving your friend's problem (presumably), to figure out what was going on with Sunny.

As for the three categories, Qrac is definitely in the reactive, spooky, sometimes PITA one. Emotional, just like me! He's a horse that prefers to do the same trail loop over and over, and with no surprises, please!

Cesca--My two previous riding horses (now retired), Gunner and Plumber, were the reactive, spooky type, so I know just what you mean.

That is interesting, I just got a wonderful 2 year old and he was started by my fab trainer. As soon as he got comfortable with me and my house he got lazier and lazier until he balked and kicked out at my leg (of course at my trainers). He told me it was time for my spurs and to really get into him and then just move on. Nagging with my heels (I'm sure I was doing that to keep him going) was going to make him learn worse habits quickly since he is so smart. Put my spurs on, he tried to balk at the lope and wham, wham and he was done with that. He tried it both ways and straight once but it only took him one time each way to figure out it was better to go than to be spurred. I wasn't prepared for this since he is a really nice bred reiner (and everyone keeps telling me he is a little hot) and my older gelding is a lot of foundation and he was more reactive. Just having spurs would make him go YES YES, I'm a good boy. Every pony is different in so many ways. Love my new guy, he has a great personality and I think will become a sweet partner.

dunslidin--When I trained young horses we rode them all with spurs (except the super sensitive ones), though we didn't spur them very often. The spurs were there for the reason you say, so that we didn't have to "nag with the heels". Your new horse sounds like a good one.

OMG you are so on the ball with your description of the three horse types! I was reading about the balky/bucky ones nodding and thinking, yes that's Flurry; and the reactive, spooky ones, thinking, oh yes, that's Aero! (What's PITA, by the way?)
Isn't it funny how explaining something to someone else helps you to see it clearer yourself? I learned that years ago in school, not sure if I've ever applied it in my horse life though... maybe subconsciously

Martine--I agree--writing about things (explaining them) DOES help me to see things more clearly. And PITA is pain in the ass. I don't usually use these modern little "acronyms" (is that the right word?), but I kind of like that one.

Your post is so timely! Just the other day while riding with my friend on a trail ride, I was riding one of her horses- large pony cross. Sometimes on the way back from a ride he will do 3 small bucks and act like he is in a hurry to get home and I have always been able to get him to stop and just walk calmly back. But, the other day when we turned for home up a hill he did his 3 little bucks, I got control of him and a few strides later he bucked again 3 times but this time bolted off after the third buck. Of course, since he unseated me, I fell off. Now, this pony is pushing 30 and has never bolted before. He started the small bucks at age 25. By the way he never stopped. Found him back at barn. We were only riding at a walk. Do you think he is just too old to still be ridden? Any thoughts?

Anon--Its hard to say without knowing the pony. It could be that he wasn't reprimanded for the bucking so has escalated it in an attempt to get out of work. However, "pushing 30" is an old horse/pony. My horse, Plumber, began showing balky resistant stuff when he turned 20. It was clear that downhills and loping were uncomfortable for him, probably because of arthritic changes. He'd been a good riding horse all his life, so we retired him at twenty and he is still quite content at 24 in his large paddock. Its possible your mount just feels that he's done enough work for one lifetime. I do believe that's how Plumber felt.

Thanks Laura - He is not my pony but a friends. I too believe he is done with being ridden. Thanks again for your insight.

My mare, who I got when she was 14, was a reactive, spooky mess. Now, after 3 years of consistent handling and riding, she is almost at the "yawn" stage. But guess what? Rider requests that would have in the past elicited a spinning, wide-eyed teleporting spook, requests like "you will trot briskly past the open arena doors" now are either accepted and gone along with, even if hesitantly so, or...she gives a half-hearted one leg kick out/ mini-buck. I growl at her and boot her on, and she goes, albeit grumbling the whole way.

So, this makes me wonder if the forms of resistance a horse shows are more of a continuum than three exclusive choices. Laura, remember when you wrote about how Sunny changed over the time you've had him --changed for the better-- and showed less resistance to some routine management things (I think it was being wormed?) You didn't really have to "train" him to accept the wormer, he just took it?

That's kinda what I'm wondering about here --if maybe there's a continuum of possible resistant horse behavior, starting with bolting, moving to spooking/reactive, and ending with bucking/balky. And maybe, horses express their resistance with the form of resistance that suits their level of comfort?

I don't know...but I sure enjoy thinking about horse things! Sunny

Sunny--Me, too. I sort of roll this stuff around in my mind all the time. I agree that as a horse gets comfortable with a rider/owner ver time (and it does take time), the horse's resistant behaviors become less violent and more token. I think that's because the horse comes to trust rider/owner and accepts the persn as leader/boss--if the handling has been consistent, fair, firm and reasonably skilled. So I'm with you there.

But, in my experience, those three categories really do exist, in terms of a horse's basic nature. You see it more when training young horses--horses that haven't been messed up by someone else. My guess is that your mare was messed up by poor handling (or lack of handling--a fourteen year old horse that has stood in the pasture most of its life is going to be a tough project) and that she is now showing you more of her true personality.