Auctions are on my mind because I have been going to quite a few. Not horse auctions, thankfully. I have been bidding on old tins and cookie cutter collections that were once prized by their owners. It's sad to see someone's life laid out on tables and going to the highest bidder. But I try and treat all my 'wins' with dignity--cleaning them carefully and selling them to someone who will once again collect and appreciate them. But I am bidding on objects with no feelings; horse auctions are another story.

In my past life, I went to a few horse auctions. It was never a pleasant experience. I chose two photos off the internet that illustrate the two extremes.  The one below of the skinny horse was NOT the worst photo. Several made me sick to my stomach and I quickly looked away. I never went to a million dollar horse sale, but my husband did when he worked on a Thoroughbred farm (many decades ago.)  His jaw was hanging through most of it. The horses were sleek and beautiful with impeccable breeding. But how many ended up broken down on the racetrack and sold at the "other kind" of auction?  I am sure all of you have been to "the other kind" where horses that no one want end up. They might be lame race or show horses, unbroken three-year-olds with no breeding, a kicker, biter or cribber, or excess stock that can no longer be afforded. 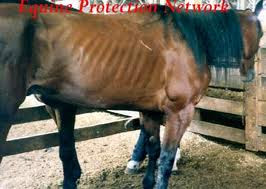 Or maybe they just came from an owner who wanted a fast sale. My mother's pony ended up in such an auction and I still have nightmares about it. My mother rode until she was sixty and got royally dumped by the said pony. It was trailered off to an auction before I could protest. I do not know what happened to the mare--she was cute and well-cared for, so I am hoping she went to a good home. She was also fat, and back then, you know what that might mean. (And will mean again now that it a horse packing plant has been opened in the US.) 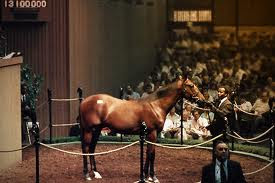 When I researched my mystery Shadow Horse, I spent time at a rescue farm where the volunteers went to auctions and bought horses that were slated to go to the killers. One was an old pony who had faithfully served a family until she was twenty-five and no longer healthy. An auction was her reward. The rescue farm bought her so she could have a gentle ending. The other was a strapping, rambunctious yearling Percheron cross that came from a farm with too many horses.  He was in quarantine when I met him; I am hoping he found a good home (and some manners.)

I know there are auctions that serve a great purpose--matching a potential owner with a good horse. And the above are extremes. But for the rest of my life, I will be happy to make my auctions the antique kind!

What are your experiences with auctions? Have you been to both kinds? Are there some positives as well as negatives? Do tell!

I have never bought a horse at an auction and I have avoided auctions most of my life. I once used to buy cattle to practice cutting at the local livestock auction, and I always left the saleyard before the horses went through--because it broke my heart. So many went to the kill buyers. Many were good horses who got old or lame. I actually knew people who "seemed" like nice people, who would blithely tell me that they sent such and such horses who had crippled up to the sale. I don't know how they could look at themselves in the mirror. Sometimes these were horses that they had seemed really fond of. Did they not understand what the horse would go through? I haven't got anything good to say about selling horses at auction, though I'm aware that some horses may get a good home that way.

Laura--it will be interesting to read other's comments on auctions. My husband did buy a nice two-year-old at auction but it was a higher-end auction for QH. That was my only good experience!

Years ago my husband and I did go to an auction just to see how it is run. I just can't go to them - it breaks my heart because I just want to take them all home. That said, recently the one local auction place in our state has had quite a few "horse rescues" bid on the horses that are slated for the kill buyer. The good thing is that they are saved by the rescues. The bad is that knowing this the auction house will drive the cost up or hold over some of the horses until the next sale. On the good side, horses are saved, but then when the recuse want to adopt them out to new homes their prices seem to be way to high for the horse. It's a vicious cycle.

Also, this is kind of getting off topic, but I have found that there are too many rescues who charge way too much for their "rescue" horses. I thought they were in business to save horses not make money. There is one though that has been around for a very long time the standardbred retirement foundation. They charge one flat fee for all their rideable horses. A lot of the other rescues charge a higher fee for rideable horses. Isn't the whole purpose to save horses! Sorry if I sound like I'm ranting - it's a subject that bugs me. Any thoughts?

I have not been to a hose auction. But after reading other peoples blogs about them. (horse by horse- and how many went to the kill buyer) I know that I couldn't go to one. I couldn't handle it. I would end up trying to buy them all to save them, without having the funds to care for them, and it would just be defeating the purpose. So unfortunately I do avoid them. I would buy from a rescue organization though.

Hi 14 Hands. The rescue organization I worked with did not 'sell' their horses but adopted them out with the idea that if the future owners didn't want them they would come back to the rescue farm. One of the problems today is the high cost of feed, care and vet work, so unless there are big donors picking up the tab or super volunteers raising money (and in this economy donors and volunteers are slim to none)then the organizations can't afford to keep the horses much less rescue them. I simply wish there were more responsible 'owners' and breeders of all animals.

Cindy D -- yup, you are wise NOT to go to an auction or a rescue farm. The stories and sights curdled my stomach!

I guess it depends on the auction and maybe even locale. I bought my first mare, a Paint "crop out" at an auction. She had no Paint markings and therefore, was not suitable for the breeding program. She was sleek, broke, young and well-cared for. The horses at the auctions I have been to have generally been well-cared for and usually mostly broke, some aren't, but those are in the minority. I haven't been to an auction in several years, but always considered them a decent place to pick up a project horse, if that's what you look for.

Jenn--thank you for a different perspective on auctions. I was actually hoping for a positive spin to balance out the negative and you gave it. Whew!