My Life With Horses--Part Seven

Once again, I’m going to say something that a lot of horse people won’t want to hear. And it is this: Taking a break from working with horses can be good. It can, in fact, provide the answers you were looking for. At least this is what happened for me.
Depression forced me to take a break from riding and competing, and when I returned to riding, I knew I didn’t want to compete any more. I wasn’t sure what I wanted to do. I knew I still loved horses; I knew that I had had enough of competition for one lifetime. And I felt absolutely free to find a new path with horses. I just didn’t know what that path would look like.
I experimented, trying to find what would work for me. And I am sure that to many of my horse friends, some of what I did looked very silly. I rode in flip flops and drawstring pants, I seldom did anything more than saunter down the trail, I showed no interest in team roping, even though I had been so passionate about it for many years. I wanted my horses to become a natural, relaxing part of my life, like my garden and my dogs, not an “event” that I did. I wanted to ride (and live) in comfortable cloths that I could hike and ride and garden and nap in. I was done with tight Wrangler jeans and uncomfortable cowboy boots forever (after years of wearing them every day). I was done with worrying about what anyone else thought. And I was completely done with stressing my horses and myself in order to win some competition or other. I just wanted to enjoy my horses in a relaxing way that was pleasant for both me and them.
It took a major life change (a year of depression in my case) to create enough space for me to really evaluate what I WANTED to do with horses now. Not what anyone else thought I should do. Not what I was accustomed to doing. Not what I had wanted in the past. What I actually wanted to do at this point in my life.
I think this big “opening” also happens for others…but sometimes I think the person doesn’t see the opportunity in what seems like a disaster. Over and over I have seen the big life change come along for the impassioned horseperson, and I believe it can be a gift (though by its nature it is always pretty traumatic). But a horse wreck with accompanying injuries and fear, or the death or permanent lameness of a beloved horse, or (like me) a divorce and/or a depression, can all be catalysts that allow us to look clearly at our lives and perhaps change them for the better. And so, once I was no longer depressed, it became a delightfully open world for me, and I felt very free to find my chosen path, whatever it might be.
After awhile I found that just puttering down the trail by myself wasn’t enough. My husband wasn’t really interested in riding, and I wanted a new project. I resolved to try breaking and training another colt and see how that felt. It had been maybe ten years since I had broken Plumber as a three year old, but I thought I still had the skills.
And here is where I need to add that I have not mentioned all the horses I dealt with over the years. Were I to do that this saga would be MUCH longer. But in the time when I was passionate about cowhorse and cutting I worked for maybe half a dozen trainers and I started and/or helped to train at least a hundred young horses. Once I began team roping, I broke and trained several colts for my uncle Todd and my friend Wally, and I owned and trained a few colts that I later sold because they didn’t seem quite right for me. These horses haven’t come into the story because it would become just too long…and because they were never MY horses in the same way that Burt, Gunner, Flanigan and Plumber were my horses. At the same time, I spent many hours in my thirties breaking and training Ready, Breeze, Rebby, Lester…etc, and so I felt comfortable and confident taking on a three-year-old with thirty days on him as my next project.

Danny, like Plumber, was a colt that I had known and liked since he was born. And I had no trouble with him at all to speak of in the training process. He wanted to crowhop a little and he was smart enough to be a challenge, but I never came anywhere near coming off of him. But…at 42 years old, and a lot more aware of my own feelings than I had been when I was younger, AND consciously experimenting to see what I wanted to do with horses, I soon discovered I no longer enjoyed training young horses. It required that I ride the horse consistently, and I found I didn’t want to feel forced to ride; some days I’d rather garden or ride bikes with my husband, or something else. And I no longer felt as confident physically as I had in my 20’s and 30’s. I became aware that my skills were rusty and that if I got dumped it was liable to hurt. Danny was a fairly easy colt, but he was a colt. Young horses do unpredictable things…I absolutely knew this truth after all the years I had spent breaking and training horses. I found that at this stage of my life I wasn’t really comfortable with that element of unpredictability/danger any more. It dawned on me that I didn’t want being hurt in a horse wreck to upend my currently very happy life. I rode Danny for six months and got him pretty well started, but I realized that no, this wasn’t exactly how I wanted to spend my time right now. And then I got pregnant.

To read the book I wrote about training Danny (Hayburner) click on the title. This story was followed by Forged, in which my protagonist finally settles down and gets married. 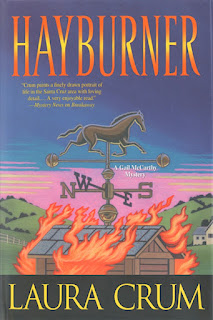 I have been meandering through the past several years' worth of writing here and have enjoyed myself immensely. Fabulous distraction while getting meds!

This post rings a bell for me as I have been dealing with a severe case of Lyme disease for four years. I have the neurological fun--seizures, memory difficulties/brain fog, unrelenting fatigue and so in as well as arthritis and its changes in most joints. I went from being a healthy, super active 24 year old to having unrelenting nerve pain on a near daily basis. I have spent a serious chunk of my time bedridden due to all this unpleasantness.

I went from riding and working my horse daily to being unable to ride for months. I am still thinking about what I want and what I can do now that IV antibiotics have proven somewhat helpful. I have lost all the coordination and muscle strength I relied on as a dressage rider, so being on a horse now feels strange as I can't seem to ge my body to do what it should.

Strange events in life can really open your eyes. I have learned a lot from being ill. There are a lot of annoying things but some silver lining too. I'm trying to figure out how horses fit into this different life with me.

Given the horses I have, which are all twerps, I have to feel really damn good to be able to ride as I am guaranteed some kind of drama while riding. I have been mulling over your thoughts on reliable horses and haven't yet made up my mind. Would you mind emailing a bit with me about this subject?(mbenedette at gmail)
--Maggie

Maggie--I am happy to email with you and share my thoughts, but don't know how much help I can be. I'll send you a note.

Thank you for sharing this series, Laura. I just got caught up and loved every bit of it. I admire your take on the challenges you faced before your epiphany regarding a happy life with horses. I think your story could be very helpful to many people.

Thank you, Val. I'm glad you're enjoying it. My life with horses has been very happy overall--and it keeps evolving. Which is, I think, as it should be. Though everyone's path is different, I will admit to not envying those who have been involved with horses as long as I have and are still chasing the same "goals" they had in their twenties.

Maggie--I sent you an email and didn't hear back. Feel free to email me. (laurae at cruzio.com)