My Life With Horses--Part Five

I was in my early thirties when I decided to train my nine year old cutting horse to be a team roping head horse. Never mind that Gunner was solid in his role as a cutter and that being a head horse required completely different skills. Never mind that I had never trained a horse to be a competitive team roping horse before. I was sure that I could get this done. (Are you beginning to see a pattern here? See Parts One, Two, Three and Four.)
I started showing up at the practice roping on my cutting horse, and swinging a rope. All I can say is I don’t recommend this approach. Gunner was (of course) afraid of the rope and he had been taught to move sideways (hard) when a cow even flinched, rather than chase it and provide a steady platform to throw a rope from, and he was, above all else, a big spook. I had never been good at ball sports and roping is very much about hitting a target. The gear is completely different from the tack/gear used in cutting, the position in the saddle is completely different, the way you hold the reins, the amount of contact…I could go on and on. The two events had NOTHING in common other than both involved cattle and western saddles. Seriously.
In short we were totally lame. So bad that my uncle took pity on me and said he would train Gunner to be a rope horse, while I practiced throwing the rope at what is affectionately known as a roping “dummy.” I had to learn to rope the horns before I was going to be able to teach my horse to be a rope horse.
Well, it sounded like a good plan. My uncle was a heeler, and once we had gotten Gunner somewhat used to the whirling ropes, my uncle tried to make a heel run on him. Gunner was willing to chase the cow, and when the header turned the steer my very cowy horse stayed right with the animal. My uncle stood up to throw the rope, the steer scooted to the left, and Gunner moved hard and fast to the left, as a good cutting horse should do. But cutters ride sitting deep in the saddle and team ropers must stand in the stirrups to throw the rope with force. Just try riding a cutting horse while standing in the stirrups…I dare you. My uncle landed flat on the ground. But he wasn’t discouraged.
The next afternoon we went back to the arena and again my uncle tried to heel on Gunner. Same result. The next afternoon, again, the same. (I’m actually not kidding.) But this third time my uncle picked himself up off the ground, led Gunner over to me, and said, “I’m never riding this horse again.” And he didn’t.
So it was back to square one. Fortunately my friend Wally was game to give a try at helping me train Gunner, and we discovered that Gunner was a lot more “stable” when he was on the header’s side. Within six months I was heading cattle at the practice arena on Gunner and having a fine time.  And Gunner was doing great. This kind and talented horse had allowed me to train him to do three different (and very demanding events), none of which I knew how to do when I set out to train him. Again, I don’t recommend this approach. Gunner was (and is—he’s 33 and munching hay happily in his corral on my property as I type this) an exceptional horse. Here we are heading a steer for my friend Sue’s dad, Bob. 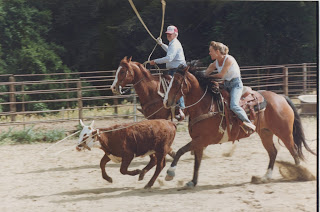 In order to help me progress as a roper, Wally let me rope on his good horse, Flanigan. And here, for the first time in my life, I discovered how much EASIER it is to learn a horse event when I was not trying to teach the horse the event at the same time. Because Flanigan knew his job and he did not need my help. All I had to do was my own part and Flanigan would do the rest. He was a wonderful horse and I fell completely in love with him. Here I am on Flanigan turning a steer for my friend Sue (riding Pistol) at the local jackpot roping. 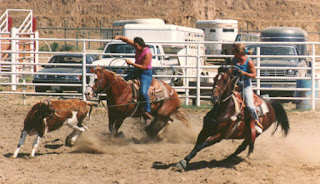 So life was good. I enjoyed roping; it was affordable and not political. I bought a half interest in Flanigan, and I had Gunner and Flanigan to compete on every weekend. My whole life was arranged around roping…I thought of nothing but the next practice and the next competition. (I’m sure all my friends who are passionate about endurance, dressage, eventing…etc will grasp this mind set, if not the team roping event itself.) I started training young horses for Wally and my uncle Todd—getting them started as rope horses. I bought a three year old colt for myself (Plumber) and broke him and began training him to be a rope horse. I’d known Plumber since he was born, so this was a special project for me. (Baby Plumber and his mom, Bucky). 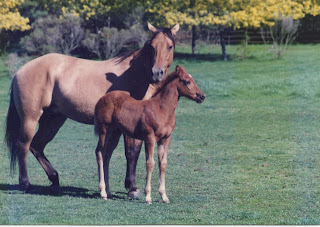 To top this off, I finally achieved another long held dream. A major New York publisher, St Martins Press, bought my mystery novel featuring an equine veterinarian and set in the cutting horse world (Cutter). I had always wanted to be a published author and now I was one. In short order I sold the second book in the series (Hoofprints—about reined cowhorses) and the third (Roughstock—about team roping.) 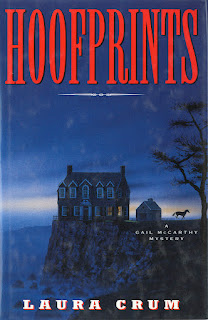 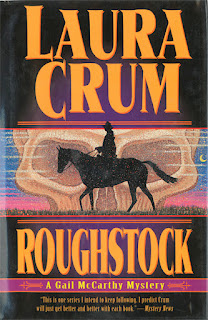 I was able to buy a piece of land and began to develop it into a horse property. Everything was going well—or seemed to be, anyway. But life had a few twists in store for me. (To be continued.) 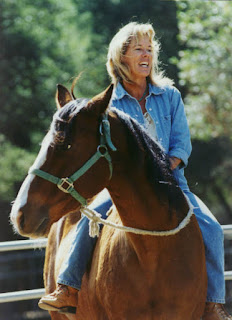 PS—Click on the book titles to find the very affordable Kindle versions of the first three books in my mystery series. Cutter and Hoofprints are currently on special for 99 cents each, and Roughstock is just $2.99.

I'm loving this series, reminds me of how I "trained" my first horse, except I had no experience with riding at all! We did everything from 4H shows to gymkhana, jumping, sorting, guiding trail rides, and drill team. Somehow we both survived and now 15 years later she is semi-retired. She's earned it! ;)

Breanna--Thanks! I feel the same way about Gunner. He's earned being fussed over and fed pricey old horse food.

I think it's so cool that you were able to do such a wide variety of things with him :)

I'm loving this series of posts!

Dom--He was a super trainable horse. He always just tried his heart out to do anything you asked of him. A spooky goofball, but a real athlete with tons of try. I rode him in the mountains some, too, and there was no quit in him. I think i'll just go down to the barn and turn him out for a little grazing (!) Talking about him makes me realize how much I value him.

Aarene--I'm glad you're enjoying it. I loved a post you did a while back--something about your life with "brown horses." I can't quite remember the title, but I remember the post, and it was one of the things that inspired me to do this my life with horses thing.

It’s never too late to develop your data and your contents really excite me a lot. John Shooter