If you’d told me four months ago that before the end of the year I’d be riding Qrac, my nine-year old Lusitano, alongside bulldozers, streamrollers and pneumatic drills I’d have said you were mistaking me for someone else.  If you’d insisted, gone on to say, “Seriously, Cesca, you’ll see; pretty soon you’ll be cantering around an outdoor arena while workmen dressed in fluorescent clothing clank about with tools and giant pieces of equipment! There will be a giant crane swinging overhead, lorries rumbling in and out of the property loaded with all sorts of building materials. There will be welders creating mini firework displays in dark corners, giant sheets of plastic flapping about in gale force winds. You name it, there’ll be it! And you’ll be riding in it!”

By then I’d probably have checked your forehead for fever, whereupon you might have nodded knowingly and carried on telling me fairy stories about Qracy and I plodding past cars and tractors and miscellaneous trucks on country lanes, reins long and loose. You might have mentioned us ambling past curious cows, trotting and even cantering along dirt tracks flanked by apple orchards swathed in anti-hail nets swelling and whooshing in the breeze.

Pff! At this point I’d have been really worried about you, potentially suggesting a quick trip to the hospital.

The thing is: those fairy stories came true. Since moving to our new stables in mid-August, Qrac and I have experienced all of the above and more. My spooky, pretty volatile Lusitano and I have had to learn to cope with living and working on a building site, with trail rides mandatory when heavy rain turned the arena into a gloop-fest.

I hadn’t planned on moving Qrac to the stables in my village before the beginning of December, when the new stable block and indoor arena are scheduled to be completed (by the way, they open this coming weekend! Woohoo!), but circumstances beyond my control decided otherwise: I tore the ligaments in my ankle while on holiday, needed crutches, and couldn’t drive the 60-odd kilometres to where Qrac lived. Luckily for me, someone moved their horse out of the village stables, freeing a box and allowing me to bring Qrac here four months ahead of schedule from one day to the next..

Frankly, when I took the decision I hadn’t given much thought about what it might be like working him in conditions that, at times, have been pretty crazy. If I had I’d probably have decided moving him early was far too inconvenient, not to mention dangerous, and I’d have sent him down to the south of France to his breeder (Elevage Massa) for a few months of training. Had I done that, right now I’d probably be on my way to Les Arcs-sur-Argens to pick him up, returning with a finely-tuned horse well-versed in the art of beautiful half-passes, magnificent flying changes, and in possession of a far more established, far more balanced extended trot. Viewed from a purely dressage point of you, this would have been great. But I’d have missed him like crazy.


And you know what? Now, less than two days away from the official opening of the fabulous new installations, I’m really happy Qrac and I were here to witness the construction almost from start to finish (the foundations were down before we came). Sure, there were some pretty hairy moments the first few times I worked Qrac in the paddock with bulldozers bulldozing away approximately two metres from the rail, and buses and trucks zooming by on the adjacent road. He spooked. He spun. He tensed up. He wasn’t always one hundred percent with me. But thanks to all this commotion we've both been forced way out of our comfort zone. Qrac has developed coping skills he never knew he had, and I've gained so much confidence.

We've done more hacking in four months than in two years at the previous stables, heading out in beautiful weather as well as horrendous weather, learning that we’re quite capable of dealing calmly with things previously considered totally out of the question. We’ve done other “different” things too: we even had a jumping lesson, both thoroughly enjoyed it (Qrac quite fancied himself as a show jumper!), and will probably do more of that once the indoor arena opens this weekend! Oh yeah, and we did a dressage competition, too, ten days after I got back into the saddle after my injury, practicing the test alongside diggers and heavy machinery. We did ok, all things considered! 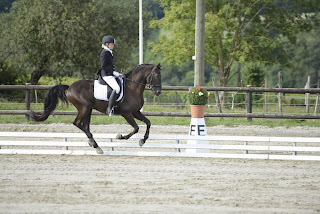 But I’m ready for an indoor arena now. The past two weeks have been particularly trying; the outdoor arena is pretty much frozen due to insane northern wind bringing us arctic temperatures. Hacking out is horrible, the wind so strong that Qrac has to put his head down and really turn on his rear engines to get us back to the stables. Still, seen from a positive perspective I know I wouldn’t even have considered riding him outside in such conditions! But when you’ve got to go, well, you’ve got to go. We’ve gone, been pretty blown about, got somewhat rattled in a couple of areas (the clanging flagpoles and flapping flags at the village dump, the hail-nets covering the apple orchards, the bamboo hedge near the vet’s house, and various renegade plastic bags), but made it back to the stables without too much ado.

So when the indoor opens this weekend, and we’re once again able to enjoy riding in the lap of luxury, I know I’m going to continue going out hacking as often as possible, trailering to different places, doing more cavaletti work. Variety really is the spice of life, but isn’t it funny how it sometimes takes an incident to make us realize this?

How about you? Have you been forced out of your equestrian comfort zone and reaped all kinds of benefits?
Posted by Francesca Prescott at 1:41 AM

I love reading Qrac's updates. What a great learning zone for him. We also board, in the summer, at the base camp for a construction company, so my spooky guy has gotten very used to any type of loud equipment. If only I could convince him that grey rocks are as safe as a big dump truck I'd be happy. ;-)

I was just about to say "at this rate you're gonna turn into an ENDURANCE RIDER" but then I saw the photo of that beautiful arena.

Yay Qrac! And yay Cesca, too. You and Qrac have come such a long way together. I love reading about your adventures.

As always I love your posts--I have missed them!

Glad you and Qrac have survived what sounds like (to me) unridable situations. But I am a sissy.

Wow, what amazing strides you have both made in the last few months! And isn't it wonderful to have a horse that's been exposed to so many things? Suddenly the world is a much bigger place that you can explore and be confident in.

Thank you, everyone for reading and for commenting! WE HAVE BEEN RIDING IN THE INDOOR!! Since Saturday morning! Woohoo! But we've also been out on a short chill-out (and very chilly!!) trail ride every day right after working in the indoor. Should I sign up for a cavaletti/jumping lesson this Saturday???

Cesca, I really love how far you've come with Qrac! You have both grown together so much, and I love following your adventures :)