As some of you know, I’ve been working pretty hard lately on a new project that isn’t horse or writing related, and today I’m going to tell the story, as a couple of you (I’m looking at you, Funder) have requested it. For the rest of you, this may be a pretty boring post.
Long ago, when I was twenty-two, I spent a summer living by myself at a fairly remote Sierra lake, with only my young dog for company. That summer left a deep mark on me, and ever since then, I’ve been somewhat obsessed with sitting by/contemplating water. The first three houses I lived in after I graduated from college were all situated by the banks of creeks. But the property where I now live, which I call home, does not have any water within view. And it has always bugged me.
About sixteen years ago, as I was going through a divorce and struggling with depression, I became determined to have SOME water to look at from my porch. So I dug a hole and bought a pond liner and some rocks, and voila I had a little fish pond. About seven feet long, four feet wide and four feet deep in the deepest part. I had water lilies and iris and goldfish, and for all these many years I have very much enjoyed my pond. But it wasn’t enough. 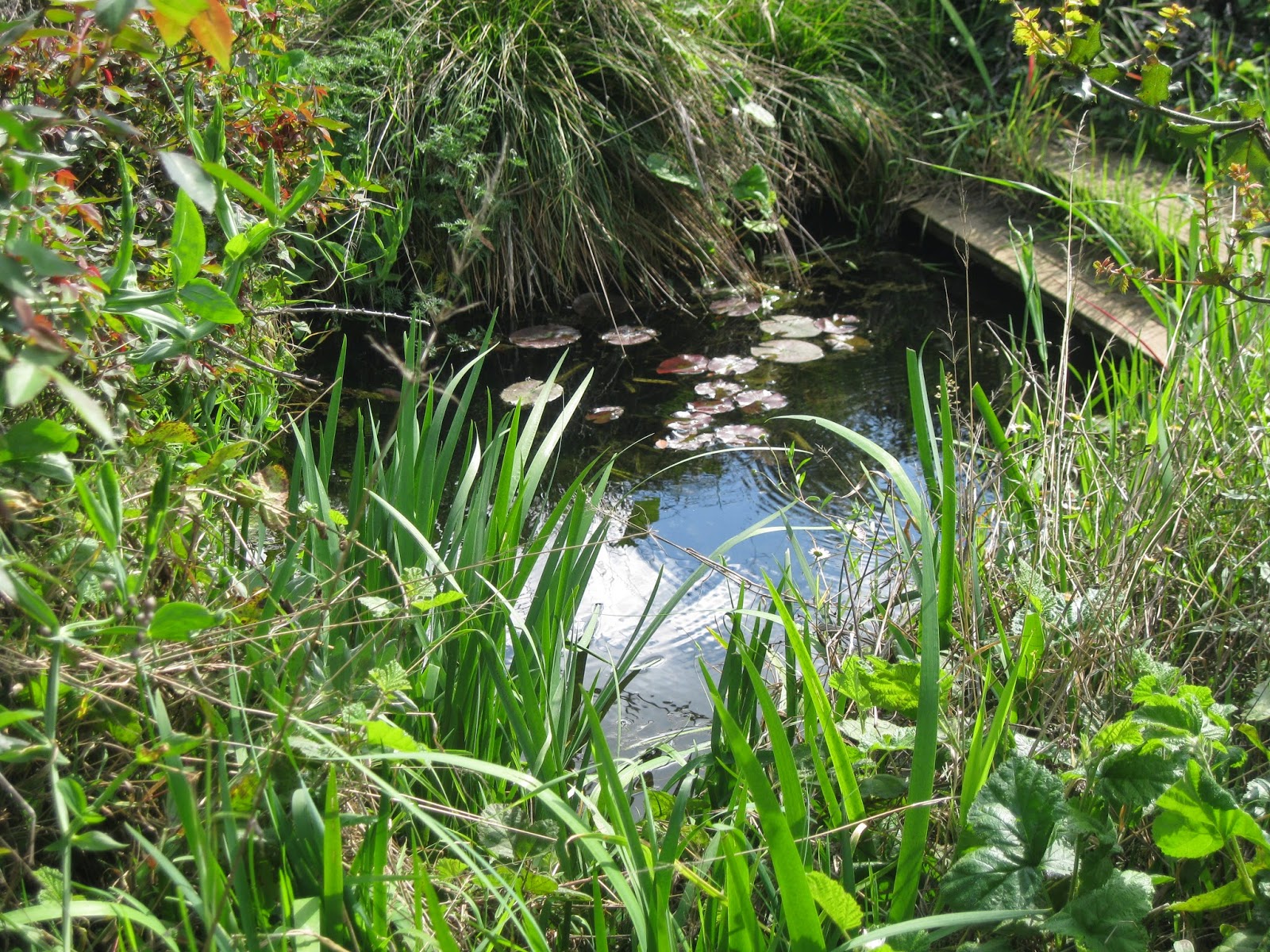 Every year, as we took our annual road trip across the country to visit my in-laws in Michigan, we camped by and swam in natural bodies of water. Lakes, rivers, streams, reservoirs, canals. My husband’s parents live on a small lake and while we stay there, we swim every day.
Grandma and Grandpa’s lake. 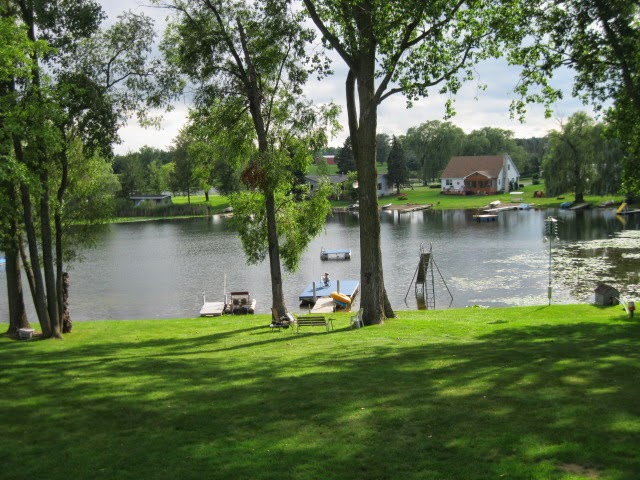 Lake Michigan—our favorite time to swim there is sunset. 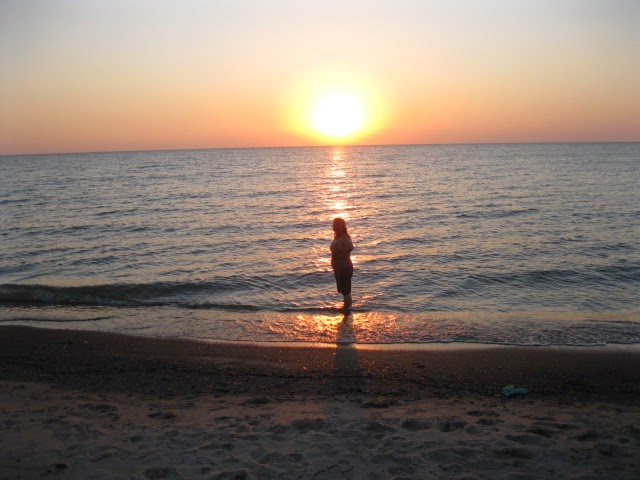 Poudre River in Colorado—we camped there every summer for seven years in a row. 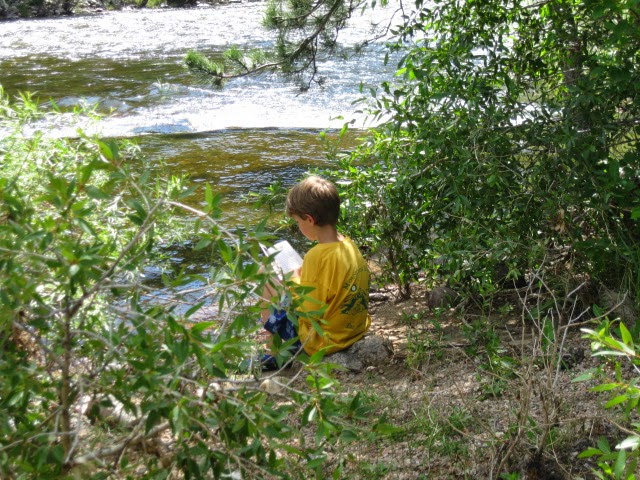 The mighty Mississippi River—there is a house on an island that I am looking at in the photo. 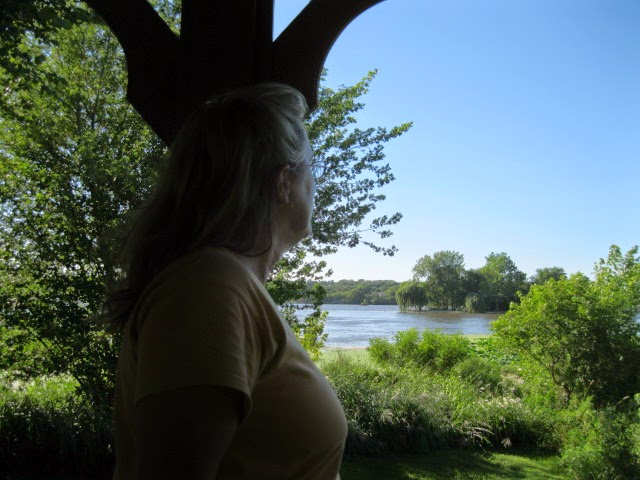 Walker River in Nevada—my husband swam in every body of water we found. 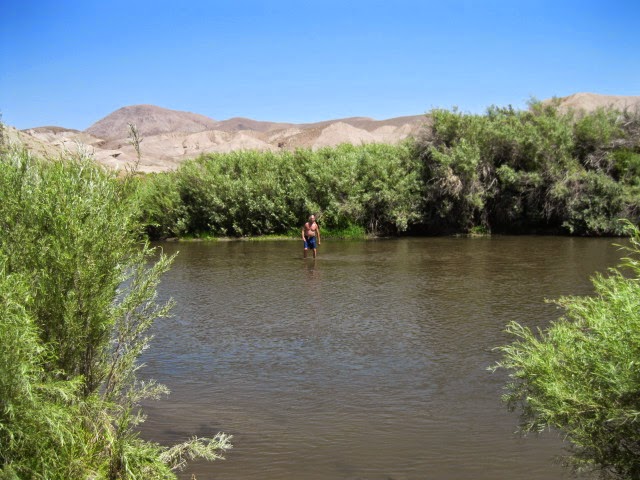 Stanislaus River in the Sierras—very near the lake where I spent my long ago solitary summer. 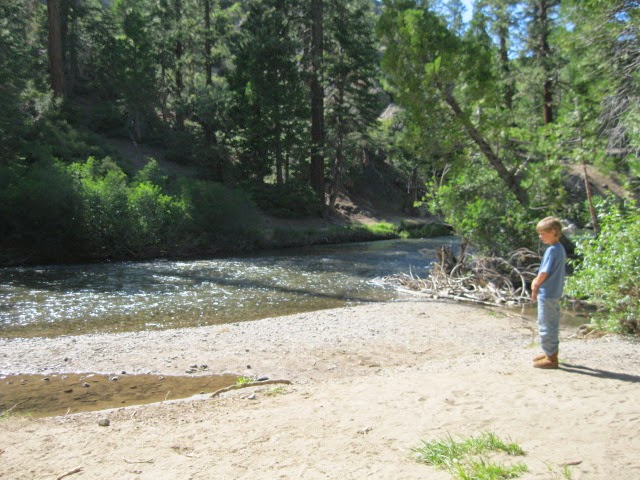 Awesome, thank you! It looks so beautiful, and wow you put a lot of work into it. Can't wait for part 2 :)

I like looking at (pictures of) your pool. Your delight in it is wonderful.

Here in the Swampland, of course, such a thing is absurd. We go to astonishing lengths to get water AWAY from our homes (nasty stuff, water!)

And that, right there, is the beauty of the Internet.

Good topic. Like you, I love sitting near a creek and losing myself in the sound. I also love swimming in natural water, even if it's kind of nasty.

But I'm tempted to rip out every water feature we have here, because of the tremendous amount of work involved in maintaining the ponds.

We have a hardshell pond right at the street/entrance to our house, and it's adorable with rocks and ground cover plants and flowers, but I'm constantly weeding it as grass grows right through the ground cover. The pond itself attracts insects and regularly fills with algae. Neighbors let their dogs drink from it, which baffles me. Also, those hardshell ponds can be installed perfectly level, and overtime the ground shifts and one plastic lip is always sticking up, looking bad.

Then we have our biotop, a larger flexible "fabric" (rubber?) pond, with pretty rocks all around it, that are constantly filling up with weeds. Grass, nettles, moss, everything. Fireants live under the rock border so when I try to weed there, I get bit. I've learned how to patch up holes in the material with something similar to a bicycle tire fix kit, but it's not a task I enjoy. Nasty, nasty animals live in that pond, in addition to cute little salamanders. Currenly grass is growing in the pond itself, somehow, and I don't know how to get rid of it because it's intertwined with the water plants. Soon it will be completely full of grass.

Then there are our fish ponds. They are in such a horrible state right now, slowly filling up with grass and weeds, they are an eyesore. The guys who have contracted our ponds to keep trout down there, they have neglected them the last 8 months, and it's a disaster, I can't stand to go down there. (Literally, the nettles are so high now you can't walk.) And since our tiny creek is down there, it's the place I like to go and sit in my chair and listen to the water. We are glad that we don't have to personally fight with those fish ponds anymore, and we're hoping the fish guys come back. Draining those ponds to clean them out was a task I never want to do again.

You probably know people who say "Screw mowing, I'm installing a gravel front yard." I'd much rather mow and not have to get down in the fireants and pull weeds around/in ponds.

I wish you success in your water feature; apparently you have the passion to maintain it and not let it turn into what we have here.

Ideally we'll sell this place to a lady who has a horse, and a husband with a water hobby.

This sounds so cool. Can't wait to hear more and see pictures!

Thanks, all. Glad you enjoyed it.

Lytha, I do understand what you are saying. I have had my small fish pond for seventeen years now, more or less, and I have experienced pretty much all the things you've mentioned. Ponds are a lot of work to maintain--as are horses and gardens (and for that matter, chlorinated swimming pools). I told myself from the beginning not to attempt this project if 1) I was going to be upset when the pool went through a bad phase and looked less than lovely (cause this will happen), and 2) I didn't want to interact with it regularly. Again, I look at it the way I do the horses. Lots of work, but interesting work (to me). That said, I would not want as many pools to maintain as you seem to have. That would be too much work for me.

With our small fish pond, we regularly reinvent it by pulling virtually everything out--a messy business and the water plants take a beating. Then it looks pretty for awhile, then gets overgrown and must be cleaned out again. I think of it as a natural cycle. And for a fact, those lovely bodies of water that I so admire across America? I have seen them all on days when the water was cloudy/murky/green...etc. It's just the nature of water.

Aarene--It is partly the fact that these brushy hills where I live are a very DRY enviroment that makes the water so soothing. If I lived in a swamp I would not want a pond either, I don't think.

I'm fascinated by your pool - it's gorgeous.

Not boring at ALL - I'm fascinated! Never heard of a "natural" pool so I'm extremely curious.

Can’t blame you for falling in love with natural pools! There's something peaceful and serene about lazing in a natural pool on a pleasant Saturday afternoon. I’ve always been fond of looking at beautiful lagoons, that’s why we decided to have one built in our backyard!