Hey, everyone. It's me! Just peeking up from the trenches of our back forty (okay, our back 1/4 acre) where I am single-womanly determined to eradicate all blackberries forever and ever, using just a pair of gloves and some pruning shears. 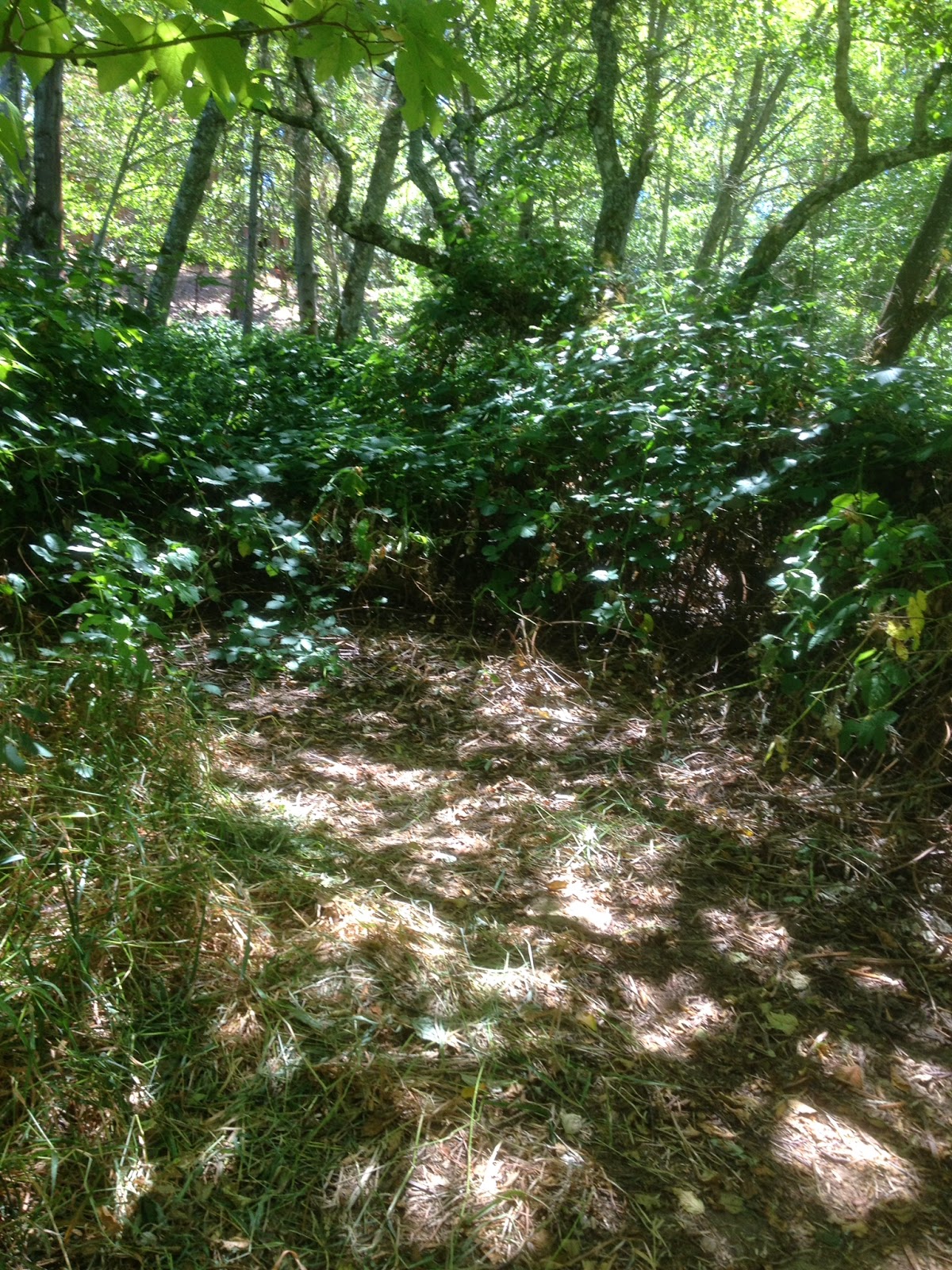 Making some progress - still a long way to go

When I was young, I used to love picking blackberries growing alongside the road. I still do. They are yummy. But in my adult life, I have learned to detest this invasive plant. First - as a gardener, because they come up everywhere! And second - well, have you ever had a green horse you were riding bolt sideways, directly into a sharp, inch-thick blackberry cane growing across the trail at head height? If not, I can assure you that blackberries cut through ears rather easily, which bleed profusely, causing said horseback rider to believe they might be dying. But I digress.

According to the Oregon Dept. of Agriculture, this blackberry (actually native to Armenia and Northern Iran) "is the most widespread and economically disruptive of all the noxious weeds in western Oregon. It aggressively displaces native plant species, dominates most riparian habitats, and has a significant economic impact on right-of-way maintenance, agriculture, park maintenance and forest production." See, I knew there was a good reason to hate this stuff.

And according to Wikipedia: it was introduced into Europe in 1835, into the United States in 1885 (only 129 years ago) and is now an invasive species in most of the temperate world.

But I am making some headway against this awful plant. 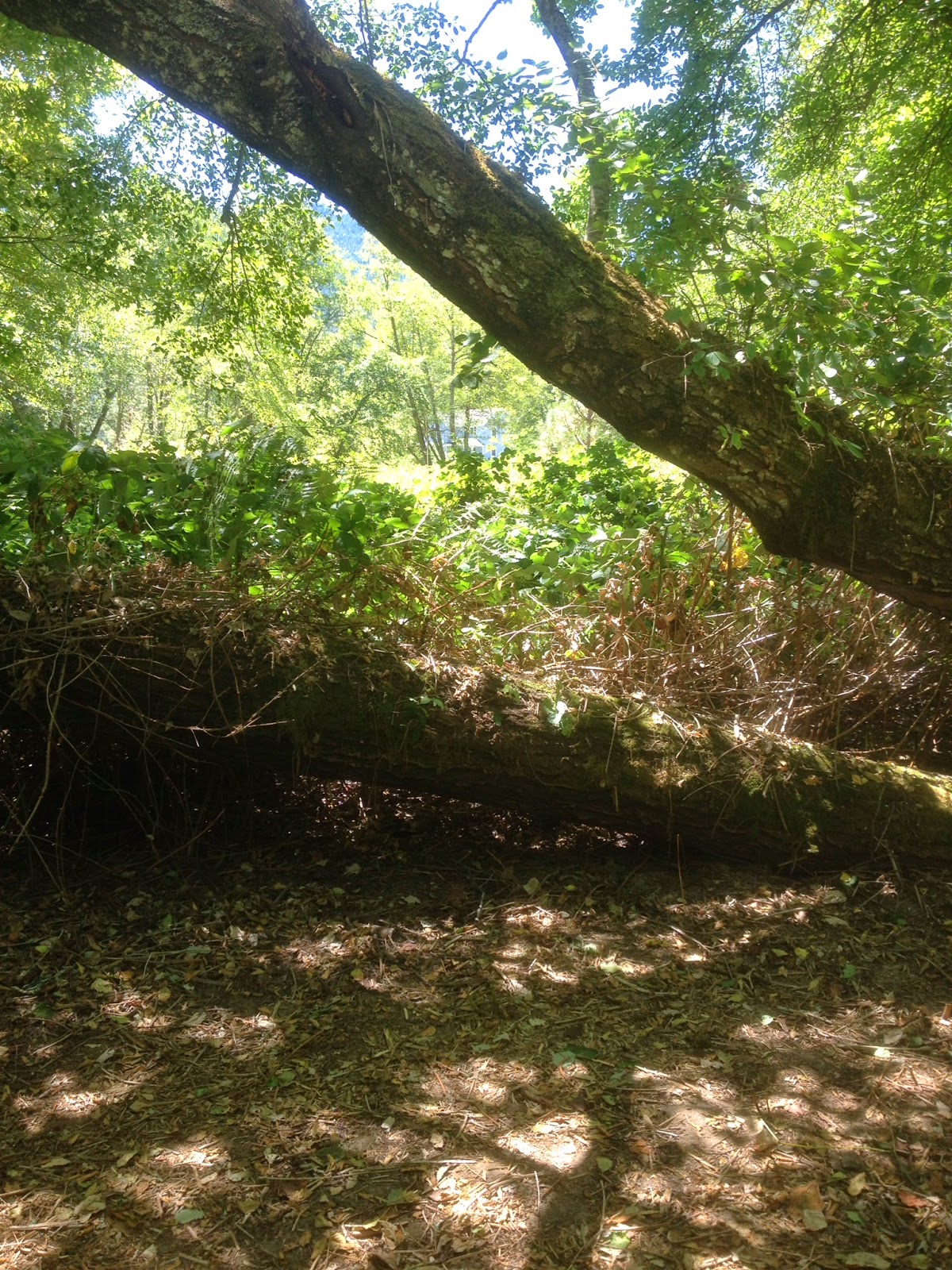 Finding treasures, such as this lovely double alder tree, fallen horizontally, but still alive, with a magnificent native mock orange growing up the right-hand side.
I work in the cool of the morning, or in the evenings, and it may take me years, but I'm determined to get rid of most of the darned blackberries from this piece of ground. (I might leave a small patch to eat. Or maybe not!) A double pair of intertwined alders that I've uncovered with my pruning shears. Lovely, aren't they?
Are Himalayan Blackberries a pest where you live? Does it get into your gardens or horse pastures? Ever had a horse drag you through the stuff? Let me know - I'll be right there with my gloves and pruning shears!
﻿

There's lots of it around here, and I have always loved picking the berries. You are going to hate hearing me say it, but I actually tried to encourage the small patch I found on our property--for berry picking purposes. Amazingly enough, the vine isn't thriving and spreading here as I'd hoped--I guess it doesn't care for being "wanted," and only wants to grow where its not wanted(!) But yeah, I have a very small patch on my back hillside...it isn't in the way, nor is it dominating other plants. But I sure have seen some big, big bushes. On one old ranch that I knew of, an entire house (a small house) was buried by that vine so that you could not even see it.

I have long contended that it's impossible to kill blackberry vines. You can burn them, poison them, hack them to bits and then burn and poison the bits, but that still doesn't kill them. You can feed burnt poisoned and hacked-up blackberry vines to goats, and kill the goats and feed the goats to a bear, and wherever the bear chooses to defecate, a blackberry vine will grow.

There is only one blackberry plant in the entire world, and all of the vines, all over the surface of the planet, are the furthest tips of the branches of the One Great Blackberry Plant.

The OGBP is rooted in Hell, obviously. Who but the Devil Himself could produce enough vitriol to fertilize the root of the One Great Blackberry Plant?

Heaven is the one place where blackberries can't grow...if blackberry vines could grow there, it wouldn't be Heaven.

But that doesn't stop blackberry vines from striving upwards, just in case there might be a goat at the Pearly Gates who might be convinced to nibble the vine, just in case that goat might then possibly be eaten by a Heavenly Bear.

Blackberry vines are the embodiment of persistant hope, which is why, I'm sure, the berries taste so good.

Laura, Laura, Laura. Keep those blankety-blanket things corralled. *wink* I'm sure that you're right - if they can escape, they will probably do better. You should see them grow in the more Northern (and rainier) climates. Geez! Scary!

Aarene - you have a poet's soul, and the same feelings for Rubus armeniacus as me. Aackk, and you live in the Pacific NW - I can tell by your mutual thoughts on this creepy, unlovely plant.

The interesting thing is, blackberries KNOW I'm their enemy, and they use any excuse to snag me and scratch me. But I am fighting back!! In the name of all native plants everywhere! Let them raise their dear heads and be seen above the fray. (At a former house I uncovered an entire bed of trilliums that no one knew was there - all covered up with the stupid stickery blackberry things.) But I raise my mighty shears against them. Even if it takes me years! (and it will *sigh*)

Your point about its invasiveness and pointy things is understood here. I have way too much behind my storage barn, and it's a PITA to deal with. There's a woman here, the Goat Patrol, who rents our her herd of goats, and I actually had her come out and give me an estimate of letting do the work. :) It takes multiple grazings, but eventually the goats do get rid of all kinds of vegetation. I'm tempted but there are other things to spend my money on right now.

Belea, people have suggested goats to me also, and they do seem like one way to go about it. But I think they would eat only the leaves, and not the stickers or canes. Anyone have any experience with this?

On our property, because there are decades of blackberry invasion, there is about one foot of new green growth on top, with about four feet of old dead (but still quite prickly!) stalks and stems underneath. Quite a chore to grub out, but in my case, I am breaking them, piling in a wheelbarrow, and stacking in a pile to be burned this winter.

The best I can say about this painstaking job is that it's good exercise!

Linda--I am glad to read about your trials and tribulations with wildlife. Mine are the bugs and fungus.