I don’t need another horse. In fact, not only do I not need one, I can’t have one. I have five corrals and there are five horses here. No room for another horse-- period. But a couple of weeks ago I saw one that tempted me.
Sometimes people ask me how I found my steady, reliable geldings. The answer is that I knew these horses to be reliable and bought them when they came up for sale, or I made a good offer on them. But what if you don’t have that luxury? How do you sort out whether to buy a horse that you don’t know? So I thought I’d tell you about this horse that I very much wanted to buy—and explain why I would have been willing to take a chance on her.
Yes, I said her. Those who know me know that I am a gelding person—I don’t want to own a mare. And that was the single biggest stopper about this horse in my eyes. She was a she. But had I needed a horse, I still would have bought her.  Here’s why.
My friend Mark, who buys and sells horses, and trains horses, and hauls horses, and holds horses for our local horse vet, and also team ropes with us, brought a little bay mare up to the roping arena a couple of weeks ago. It is not at all unusual for Mark to show up with a new trading horse—it happens all the time. And I always ask about them, particularly if I like the look of them. Even though I know I can’t buy a horse right now, I’m always interested.
Mark tied this mare to the arena fence, on the outside. I immediately guessed that she probably didn’t have any experience with roping—horses that don’t are liable to panic if a roping run comes in their direction. But this mare stood calmly at the fence, tied solid, not squealing or pinning her ears at the horses tied near her, not pawing or neighing or fretting, not nervous—she stood patiently. She didn’t seem worried about the roping at all.
When I had a chance I asked Mark about her. He said she was a flunked out cowhorse. She was twelve years old and knew the drill but she just wasn’t fancy enough to win on. The cowhorse trainer who had been riding her had convinced the owner to sell her, and the mare had been on the market for a fairly high price, but there had been no offers. She was said to be gentle for beginners, a little on the lazy side, and good on the trail. She was solid bay, a plain looking horse, and about 14.2, with good bone. She was barefoot, with nice, big (for her size) round feet. Mark had picked her up that very morning (paying very little for her—the owner/trainer were both desperate to move her)-- and brought her to our roping arena. And despite the fact that she was in a completely new place and had probably never seen a roping before, she was as calm as could be. I really liked her.
When we took a break, Mark climbed on her. Just cinched up and got on, which, of course, you damn sure ought to be able to do with a twelve year old said-to-be-kid-gentle horse. The mare was pretty well broke by my standards—took both leads, could spin, had a nice stop, turned with a cow in a very handy way, and did it all very cool and calm. She looked absolutely sound. Mark had picked her up for $2500 and he had someone that planned to buy her that afternoon for $5000 as a kid’s horse. I was just drooling over her.
“If you give me the $5000 you can have her,” Mark said. And you know, I was really tempted.
This mare had shown me everything I want to see. Calm and relaxed in a new place. Laid back to ride, handy and well broke, pleasant around other horses, sound, with good bone and good looking feet. Twelve years old—which is just about perfect if you want trouble free, but still has some good years left. And she was little, and bay (which is my favorite color). She just looked like the right kind, and I really wanted her. But, of course, I had to say no.
Which is maybe partly why when Mark and I went for a ride a few days later and he showed me a photo of a puppy he was getting as part of another horse trading deal and asked me if I wanted her, well, I said yes.
I mean there were reasons. The puppy was a corgi, and my son was lobbying for a corgi, as he loves the corgi dog that belongs to his cousins. And our little dog Star has seemed a bit lonely and mopey since our old dog, Jojo, died in February. I had been saying that she needed a companion. And this puppy was the runt of the litter and was supposed to be very small for a corgi, which would be just right to be a good playmate for Star. So yeah, I had logical reasons. But mostly I just looked at that cute puppy in the photo and thought, well here’s something I can say yes to. It felt right. So I did.
And thus we have Cleo. Short for Cleopatra, queen of all she surveys. She’s a really good puppy. And here, with further ado, are photos:
Cleo—on her first day with us. 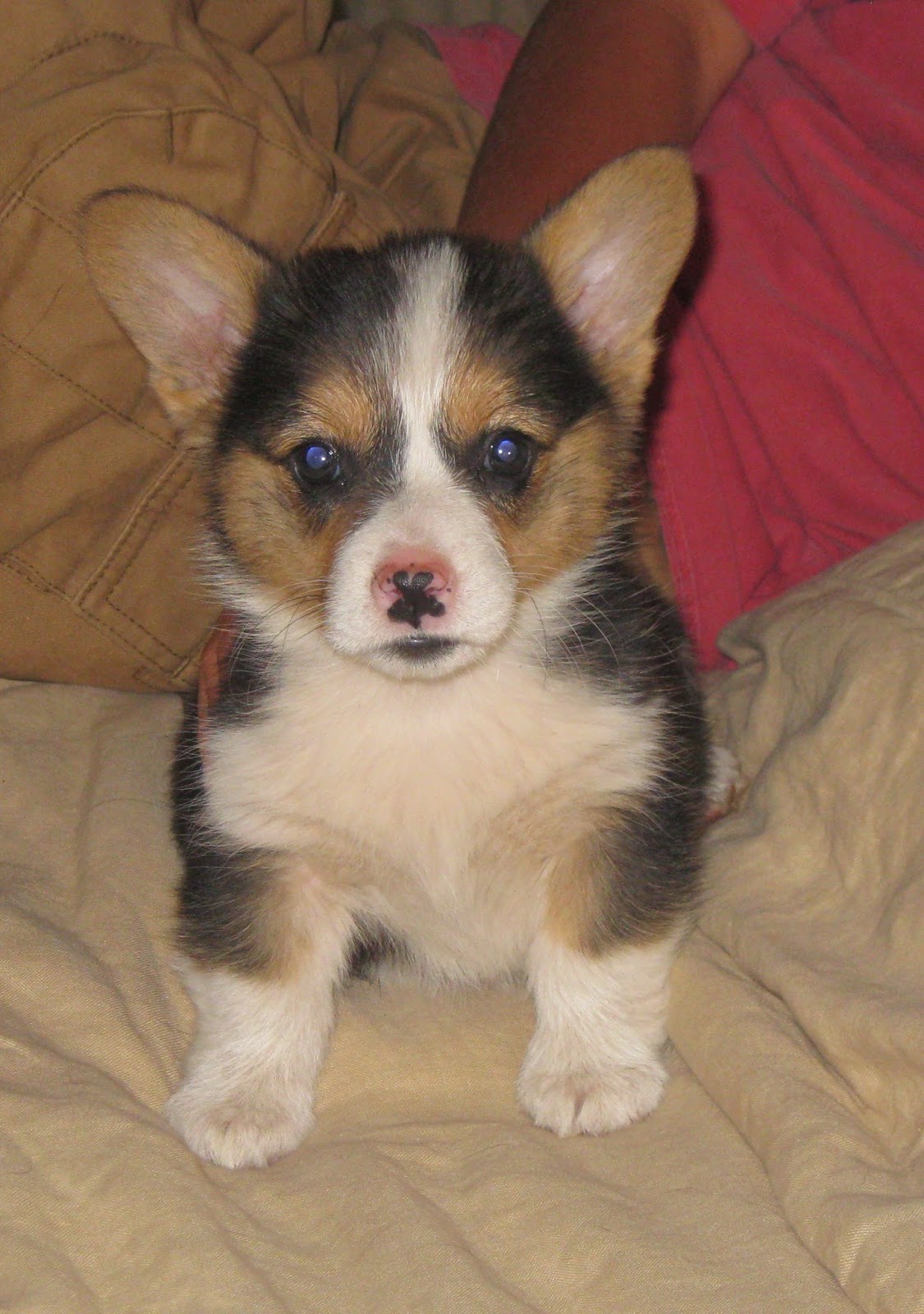 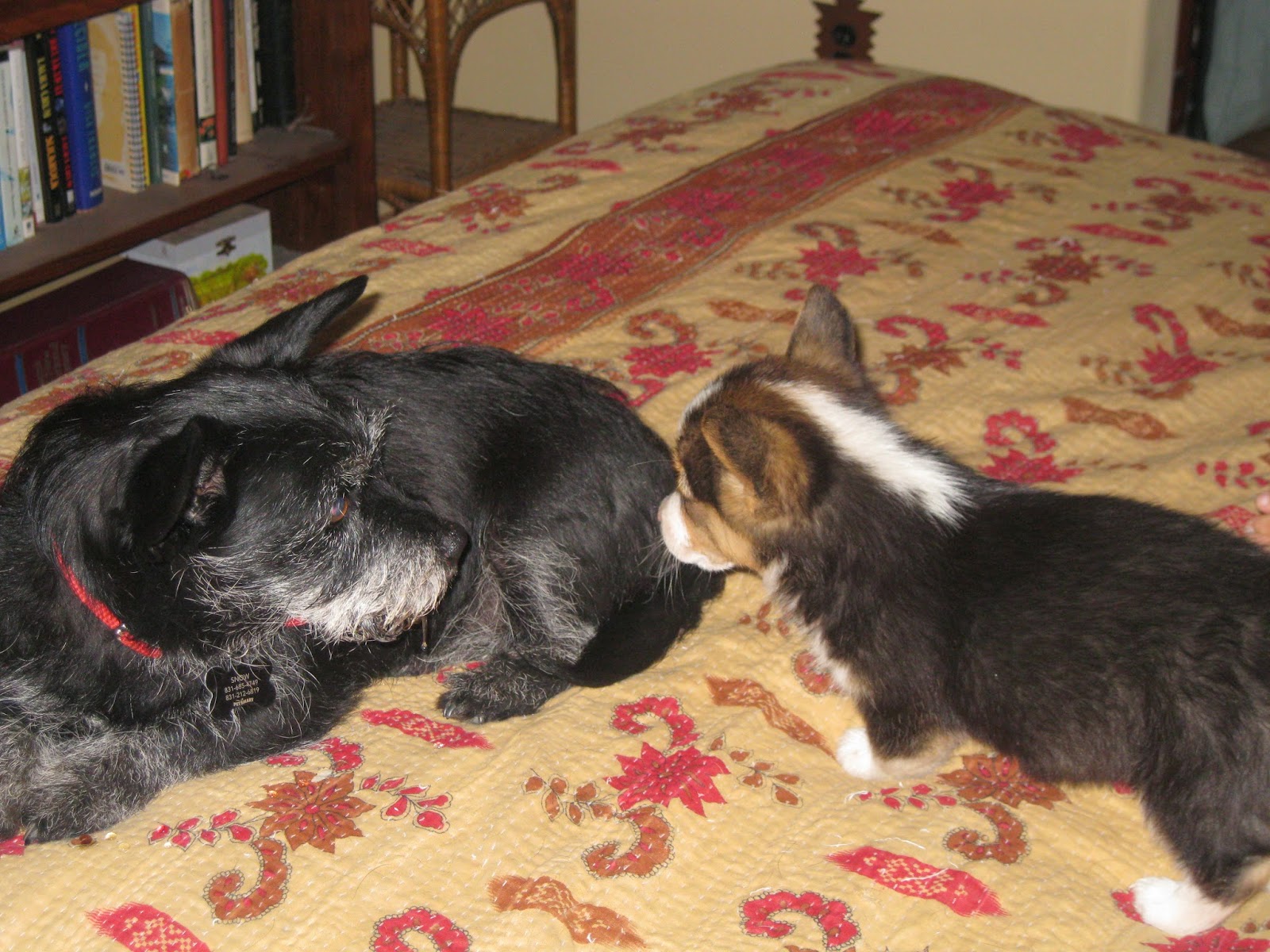 Playing with her boy. 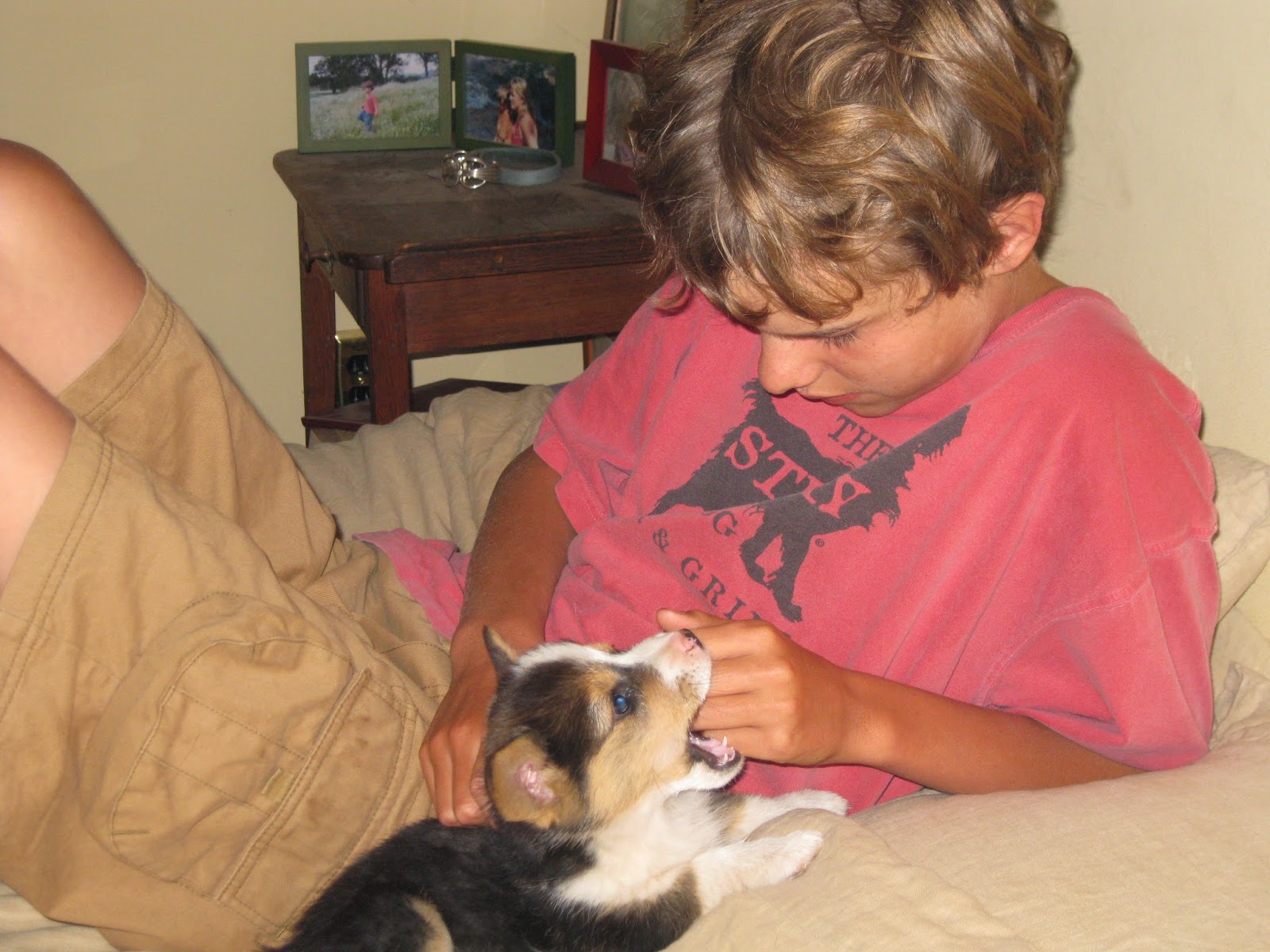 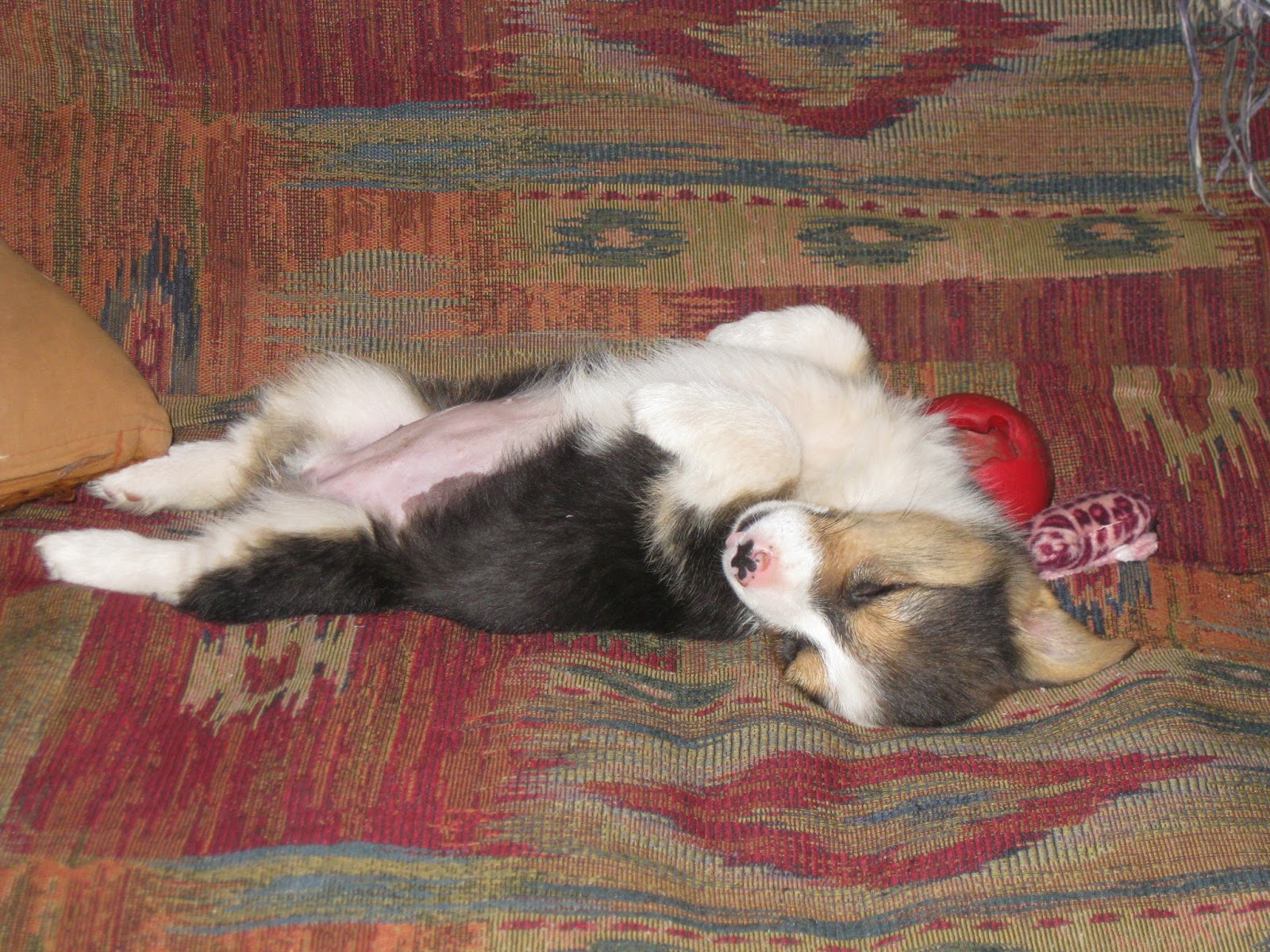 Boy and dogs are very happy together—Cleo and Star are best friends already. 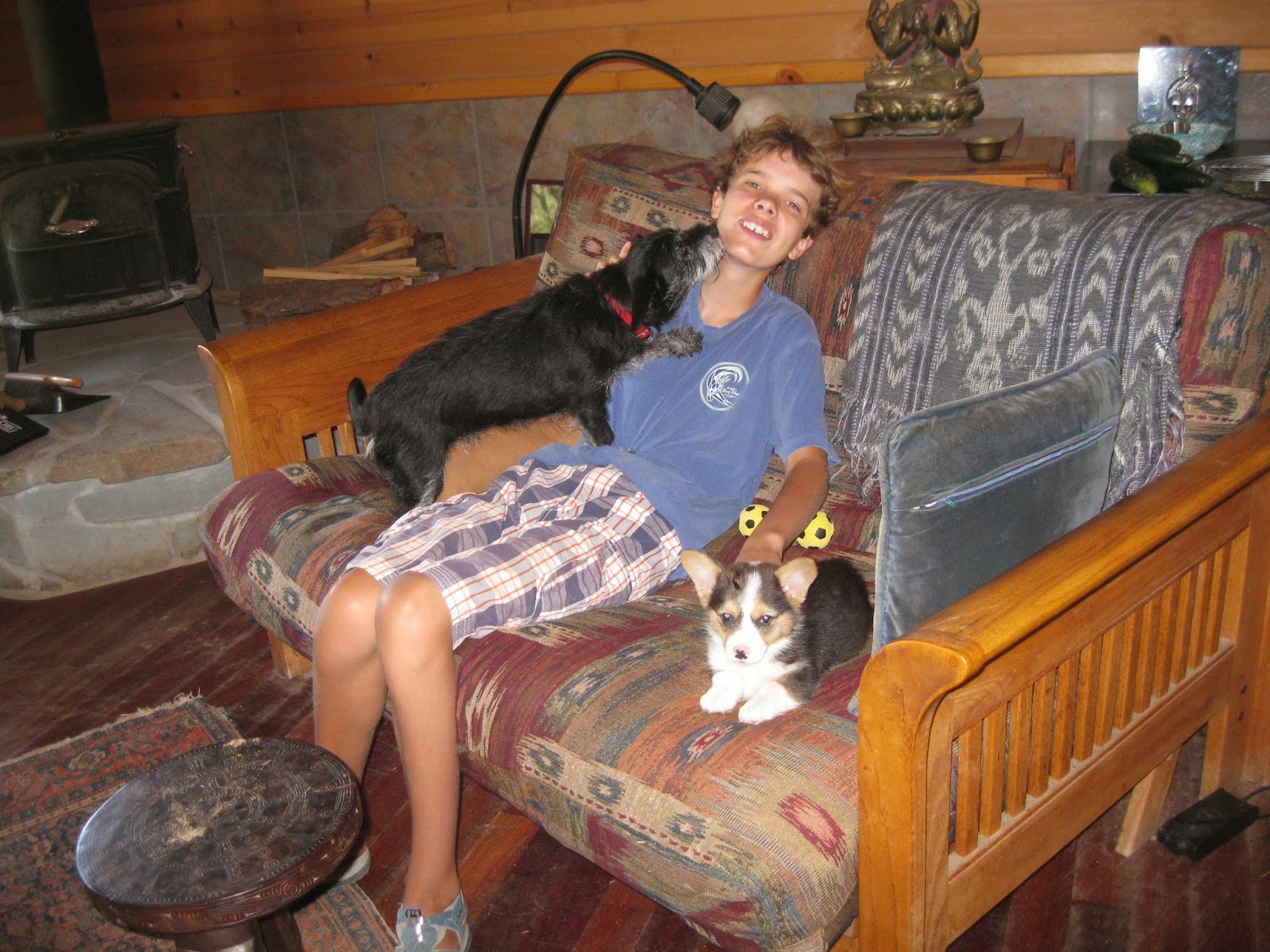 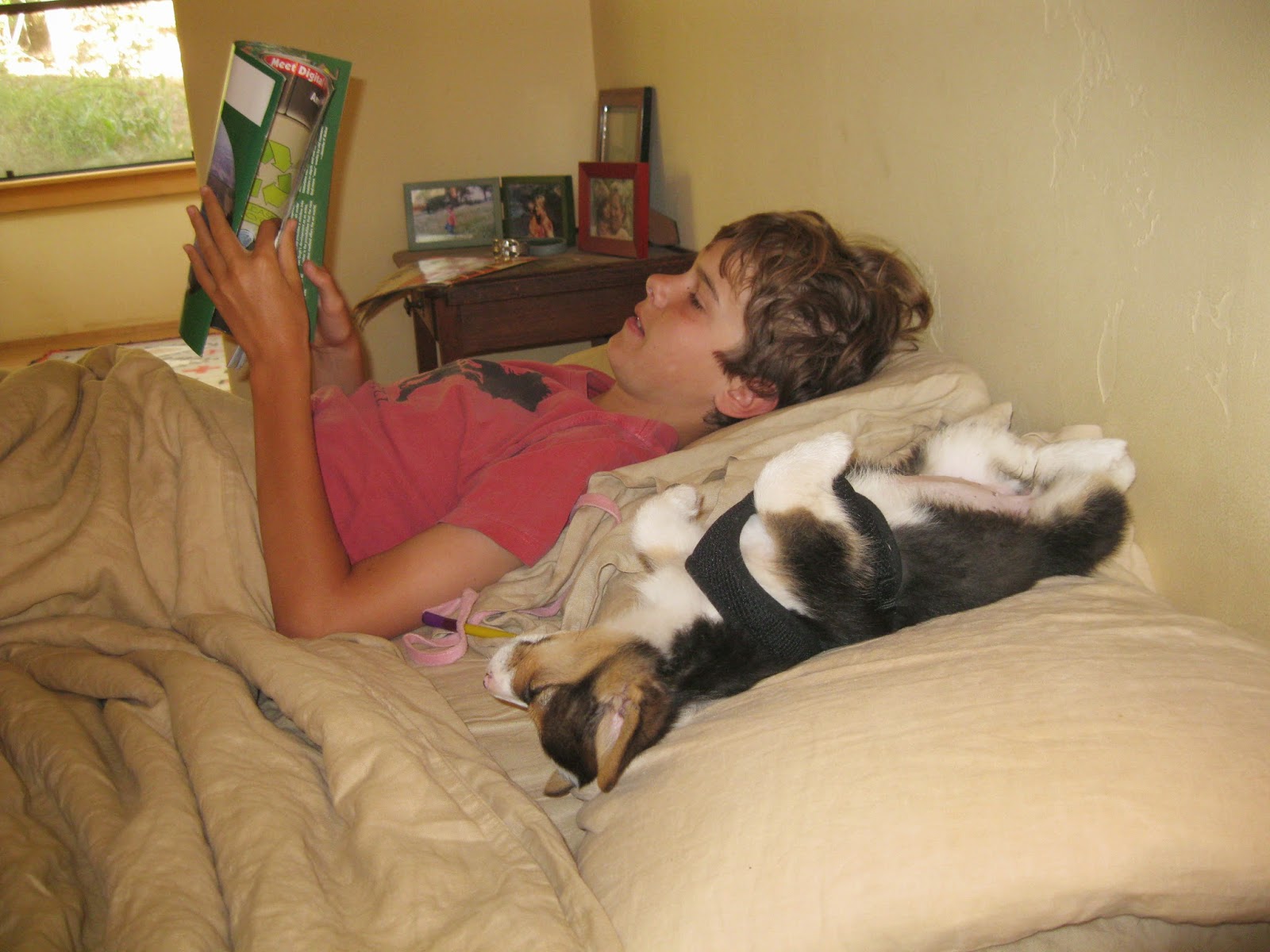 Anyone else have any insights on how to pick a horse—or a dog?

OMG that puppy! I hope you'll post pictures of her every week. I just had to put my old Aussie to sleep Saturday. He was the best dog, the happiest dog, and I think I gave him every good day he could have had. But now, I start every day crying. I know I want a puppy, but a certain farmer says no.

I also love Corgis, and I have a Swedish Vallhund, who is a lot like a corgi. I love that last picture with your son. Good luck with her.

Oh redhorse, so sorry to hear about your dog. It's so hard when you have to let them go. I know. I hope you do get a puppy when the timing is right. In my case, a certain husband was reluctant, but he's come around (!)

The new pup is adorable, btw.

Dom--Yeah, believe it or not, narrow minded though I am, I can still look outside my own particular box. She was a really nice mare--acted just like a gelding (mare people are gonna hate me for that one).

Cleo is very cute...I guess all puppies are cute. I didn't plan on getting a corgi, but I didn't go out looking for any of my dogs. They just sort of fell in my lap.

Val--Yes, Mark is good at that. He can spot the horse that will work as a kid's horse--and he has turned horses around for more than twice the money within a day or two many, many times. I have heard through him that the little bay mare is already packing a beginner teenage rider on solo trail rides and doing great. He says that ten thousand dollars wouldn't buy her now.

I strongly preferred geldings, even rode a stallion for a couple of happy years.....then to my surprise ended up with a mare. She's more complex, perhaps that's easier to work with as I get older?

How to pick a horse, that's a good question. Wise: has seen a lot of things and isn't bothered by them. Sound in body too: good feet and lower legs especially. Independent: will go out alone, happy in new places, relaxed, confident. There aren't many like that, not here in England anyway.

WHP--I like your criteria. And there aren't many like that here, either. My Sunny and Henry would qualify. I think that bay mare was just such a good one, too. Maybe some day I will end up with a mare...who knows?

yep... mares... never woulda thought it but hubby and I were both (or thought we were) dead set against having a mare on the place... In stepped Okie (13yo 14h) and Star (12yo 15h)... and changed our opinions. They are the best mannered, even when in season, quietest, pleasant equines to be around. I don't say never anymore... and the corgi, oh my goodness... had a corgi we names Try (because as a pup he'd attempt to jump up on the couch and my daughter would encourage him by coaxing him with "come on, try... try harder" so he became Try... he was also tri-colored which helped. He lived to be 10 yo and succumbed to back and joint issues. I will have another corgi someday when the time is right. They are by far the easiest to train breed I have ever owned.

Oh, I am in love already! I can see how you couldn't resist her (and of course, you did have those practical reasons . . .