I really enjoy watching animals. I love to watch horses, dogs, cats, and yes, even chickens as they go about their daily lives and relate to each other. I could probably spend all day sitting in a chair outside, just watching.

But alas, I was across the canal with my wheelbarrow, cutting blackberries, when a very big drama played out recently at our house. All I had left was the pictures to prove what happened. But as a good animal observer, it was fairly apparent to me.

"Your rooster," my husband hollered to me, "is chasing Dory all around and pecking on her."

Uh oh. This was the confrontation I had been dreading. The rooster is a new addition to our flock. For a year, we'd had only laying hens, which had all gotten along quite nicely without a male, taking dirt baths in my flower beds, following us around the yard for treats such as left-over fruit and vegetable scraps (they love watermelon) and of course laying big brown eggs.

But since a couple of my hens had become "broody" (deciding to set on a nest instead of laying eggs,) I've had to either: buy fertile eggs for them to hatch, or buy new-born baby chicks and place them carefully underneath mama (and then cross my fingers that she'd accept them - she did.)

But this process would be so much easier if the hens just had a rooster (and then the eggs would be fertile and they could hatch their own.) 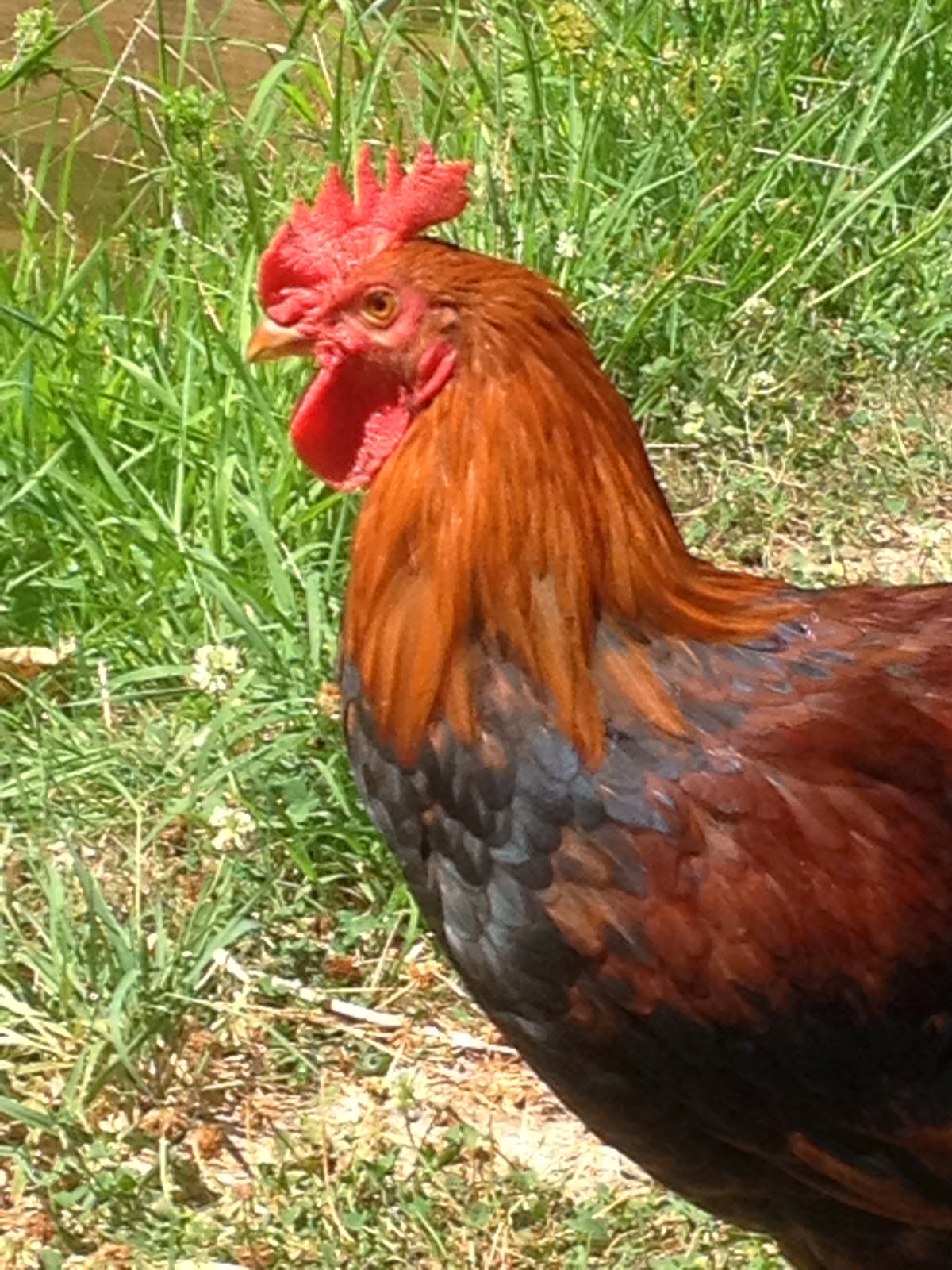 So - meet Rusty. He is a Welsummer Rooster (yes, spelled with only one "L") and he was four months old when we got him, just learning how to crow. Now he is five months old, and has pretty much figured everything out.

Our hen Dory (she is an old heritage breed called a Silver Gray Dorking) has been the lead hen for the past year. Similar to a wise old mare in horse herd dynamics, she has made the decisions for the flock, kept watch for predators, made the alarm sound when a large bird flies overhead, and pretty much been ruler of the roost (in lieu of an actual rooster.) And I knew she wouldn't give up that position easily. 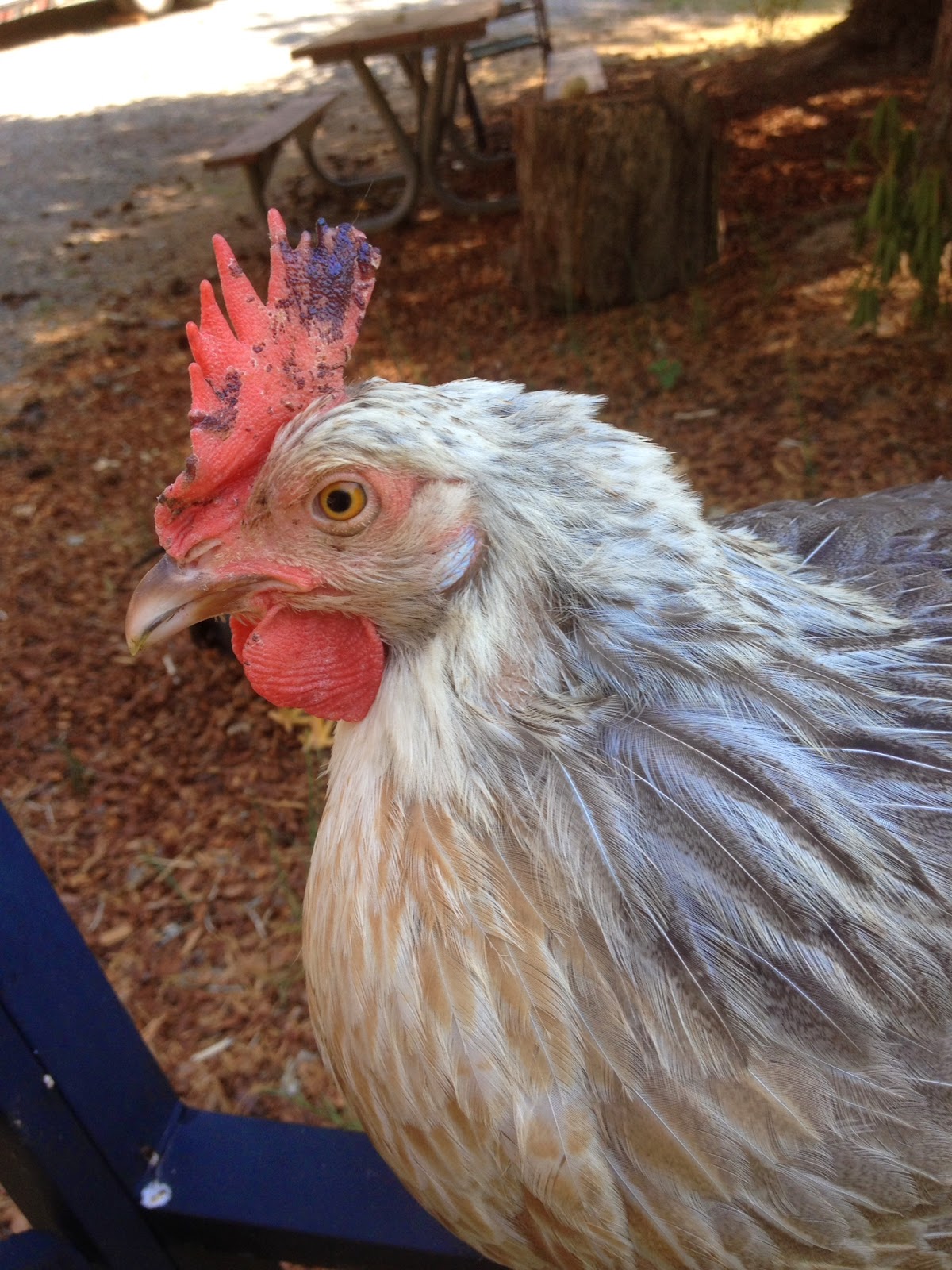 So when my husband called out to me, I instantly knew what had happened. And the power shift did not go easily, because both Dory and Rusty had blood on their combs, which means they got into a nasty fight. And Dory (dear thing) had lost. Not only the fight, but her position as leader of the flock.

In fact for one entire day, she was extremely scared of Rusty, and every time she saw him, she'd fly up to sit next to me, for both moral support and safety.

And I watched them both closely for a couple of days, because although the balance of power had now shifted, I didn't want the young rooster (or anyone else, for that matter) to continue to pick on Dory, who obviously got the worst of the fight.

What was interesting was watching Dory's body language that second day. Just as horses will show submissiveness to an older horse, or to the herd leader, by posturing or mouthing like a baby, every time the rooster came near her, Dory flapped her wings slowly in a submissive gesture, as if to say "all right, you're the boss now."

The drama seems to be over for now, and Dory (a very people-oriented hen) is hanging out with the rest of the flock again. They free-range all over our property during the day, so they can basically go wherever they want (but stay in a safe pen at night so predators won't get them.)

But Dory still comes and sits next to me from time to time, as if sharing girl talk. "He's a big meanie," she says.

What does all of this have to do with wild horses? Well, this: 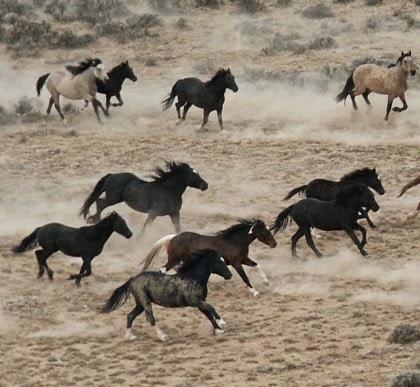 Wouldn't you like it if the BLM would release some of those thousands of mustangs they are holding in corrals across the west, and allow them to free-range on some private (or government) property with viewing stands set up so people could watch them? They have wildlife viewing places like this for elk - I have been to several of them.

Would you stop at a place like this and just sit for awhile and watch horses be horses, in natural surroundings? I would. I would! Doesn't this seem like a good solution, at least for some of those horses? Let's talk about it!

Like you, Linda, I enjoy watching animals. I just finished watching my newish family of chicks for many minutes, fascinated by their interactions over a corn cob. I watched a bobcat march down my driveway at horse feeding time this morning. But the wild horse question is a little more complicated.

I have a good friend who lives twenty miles from any other house. His unfenced meadow is adjacent to an area where wild horses live. A band of 70 or so horses has visited his meadow a couple of times. He does love observing them and takes many photos. But...they trash his meadow, which he is trying to restore (after many years of being overgrazed by sheep due to the previous owner) as a habitat for the endangered sage grouse and the native animals of the region. He both enjoys the horses and dreads the the effect they have on his meadow.

I think I would feel the same. Sure I'd like to watch them on public land or someone else's land, but if I had a little ranch and they came in and ate the meadow to the ground, no I wouldn't care for that. Also, having horses of my own, I'd be protective of them.

Anyway, there's a few thoughts on your topic.

Thanks for your comments, Laura. I haven't lived near wild horses, but have lived several places where there were elk on adjoining property. And I know that some of the farmers did not like them, because they broke down fences and occasionally made a nuisance of themselves. Private property and wildlife just sometimes don't mix.

But the kind of thing I was thinking of was a huge fenced pasture (hundreds, or perhaps thousands of acres - and there is this land in the west) where the horses would be supplementally fed (as they are now, although in useless holding pens.) Perhaps even a drive-through wild horse park would be a good way to see them. And possibly there would have to be some domestication involved, such as gelding or selling off the excess foals (such as done with the Chincoteague Island ponies.)
Lots of people have a desire to see wild horses, and I believe they could be a tourist attraction. Why not?

As for chickens, gosh I'd love to see a bobcat one day, but I'm glad I haven't. I'd be afraid they'd eat some of my cluckers!

Linda--You are so right about bobcats eating chickens. My poor chickens are no longer allowed to roam the property as the bobcat got too many of them. They have a run, and I give them all our organic veggie scraps, but I wish I could let them out. However, yeah, bobcats love chicken.

The BLM does have long-term holding facilities, where horses are rounded up and sent "out to pasture" in a safe environment. I believe these LTH facilities are open to the public, as are the Herd Management Areas (HMAs).

GunDiva - Thank you so much for that information. I was not aware of any long term holding facilities. According to the second link you posted, they are located in Iowa, Kansas, Montana, Nebraska, with quite a few of them in Oklahoma. It appears that the horses are separated into facilities for either geldings or mares. Has anyone visited these long-term facilities? Are they set up to welcome the public, and can you actually see the horses? Of course separating them out like this is much different than the family groupings they would establish in the wild, but I imagine it's much better than languishing in those smaller corrals. I certainly wish they could find a way to keep them all running free.

Linda, the LTHs are huge, so they run as freely as they can. I don't know about the public access to LTH, but I know that several HMAs (herd management areas) have "loops" that people can drive around and watch the horses. One is the Sand Wash Basin in Colorado, where they actually have groups of volunteers who go out, observe the horses, and take pictures.