When I was a little girl, I loved to watch westerns, mostly because of the horses. I remember asking my mother one day why we couldn't live out west. Much to my surprise, my mother answered, "Honey, we do live out west. In fact about as far west as you can get." I was puzzled by that because I didn't think "my" west looked like the west you see in the movies.

Looking back, I have to laugh at my ignorance. I grew up in rural Eastern Washington in a small town far away from anything. You had to drive 140 miles to find a town bigger than 3000 people. My great- grandparents homesteaded in this area. In fact, I still have the original homestead certificate.

﻿My summers were filled with riding the hills above the valley I lived in, all open range land complete with cattle, old ghost towns, abandoned gold mines, and crystal clear lakes. I had no idea how lucky I was. Now I do. I didn't have a horse until my senior year, but I had a best friend whose family owned upwards of 50 horses. They lived at the base of the foothills and rangeland between Oroville and Tonasket, Washington. We'd saddle up, ride about a mile on a paved road then we'd be on a dirt road or take off on trails through sagebrush and cactus. Once in a while we'd encounter rattlesnakes, which to this day still don't thrill me much.

﻿
﻿Sometimes we'd ride to an old homestead. The log cabin was still standing, testament to a simpler time. Even though life was tough back then, but were they really missing anything. A time devoid of cell phones, computers, the Internet, and all those things we take for granted. I often wonder if we haven't lost something important in our high-tech world.

﻿
﻿ Often we'd ride up to Golden, an old ghost town, and a reminder of my hometown's history of gold mining. At the time several buildings were still standing, weathered and gray.

﻿﻿
﻿﻿
Two or three mine shafts were cut into the rocks in the surrounding hills. Being kids, we did explore a few of these. But ever wary of rattlesnakes, we never went too deep into the mines. The rattlesnakes were everywhere in those hills.


If we planned to be out all day, we'd take lunch in our saddlebags, put halters on over the bridles, and tie the leadrope to the saddle horn. We never concerned ourselves with helmets. I have no clue where we'd buy any if we were so inclined to wear a helmet.﻿ We wore boots, jeans, t-shirts. Our horses wore various western saddles and bridles with simple curb bits. I never laid eyes on an English saddle until I went to college.

﻿﻿﻿﻿﻿﻿﻿﻿
﻿﻿﻿﻿﻿
Once in a while, we'd chase cattle we found grazing on the rangeland. Something which I'm sure the local ranchers weren't too thrilled about. All the cattle were Herefords, maybe a few Angus. Other times, we'd take the horses swimming in Blue Lake, known for its healing qualities because of the minerals in the lake. It'd be so hot that by the time we got back to the barn, everything would be dry. 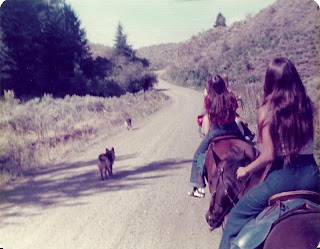 A few years ago I went back home for my class reunion. My husband and I drove up the old dirt road you see in these pictures. The road hasn't changed much, but everything else has. The out-of-staters and  "city people" from Western Washington have found my little paradise. They've subdivided the land, put up fences, and posted "No Trespassing" signs. There are several houses in those hills, where once there were none. You can't get to Golden anymore. In fact, even Blue Lake is fenced off with warnings not to trespass.

I was sad to see a little piece of my childhood barricaded from the public. I look back on those years fondly and regret that today's kids won't get to ride to the old ghost town or the homestead cabin. They won't get to imagine what it was like one hundred years ago when the first settlers came to the area. I was one of the fortunate ones, and I know it. Boy, do I know it.

I loved growing up "out west."

Posted by Jami Davenport at 7:37 AM

What a great account, Jami. I really enjoyed reading this. And how wonderful to see all your photos; your friends had amazing long hair!!!! There's something so beautiful and pure about "film" photos; images have a different atmosphere nowadays in digital format. I guess that's another thing we've lost over the years. Not that I'm complaining about the practicality of digital cameras, nor mobile phones, internet, etc. Still...reading your words made me a little nostalgic.

I'll have to dig through my old albums for photos of my childhood horsey moments so I can share them too. Thanks so much for sharing this.

Great post, Jami. I love being able to ride like that, but alas, yes, time and the spread of people take away the real frontier.

Oh how amazing! I love to ride and grew up in corn country, Iowa, with horses. We had three out here in California. My mare got laminitis and had to be put down, our old guy died and my daughter sold her cutting horse - now we spend our summers in Montana on a cattle ranch and I'm getting a horse again!
I think your photos and your memories are great! Thanks for sharing!

Jami, you were so incredibly lucky!!! That would have been a paradise to me. Thanks so much for sharing your pictures. I tell ya kids just don't know what they're missing now.

Jami--I loved this post. Your childhood reminds me a little of mine, as I grew up riding my uncle's horses out at the family ranch (along with my cousins)--the ranch dated from the 1800's and was quite "colorful". I know just what you mean about wandering around having adventures on horseback and how magical it is.

But hey--ouch! I'm a fourth generation "Californian" and I deeply resent the folks who've built so many psuedo-mansions in my area, closing off many of the local trails--though I don't know where all these people sprang from(!)Who are Californians supposed to villify?

Laura, No offense meant to Californians. But because their property values were so much higher than Washington's at one time, they came in and drove the prices around here sky high making it hard for locals to buy property.

We all came from somewhere else at one time or another. ;)

I grew up in a rural area in the mountains of Colorado that was just being discovered when I was young. We would literally take to the hills daily on our horses. We climbed mountains, and raced along an old rail bed that followed the creek below town (they have great footing and they're fast), among other rides. I doubt any of these places are open to horse back riding any longer. Where the land isn't developed, there are locked gates. I too am blessed to have grown up riding where I did.
Wonderful pictures. They take me back.

What a wonderful story, well told. It must have been incredible to have such a great group to ride with in those days. I was the only person with a horse when I was younger, I think it would have been a very different experience if a few of my friends rode.

Thanks, Jami, for your memories and your pictures. I grew up in California, in a time and place where I could still take off with my horse and be gone all day. And I did, and the adventures we had remain a part of who I am today. It is sad to see the places you remember now fenced off, so I can definitely relate.

There is still a lot of wide open space in the west, and lots of open land to ride on. You just have to go a little further, and look a little harder for it. And on a horse is one way to do that. Thanks so much for your post.

Maybe 'ridin' wild' is what makes us horse lovers today. It seems we all have similar growing up experiences no matter what area we lived. I can remember cantering my pony and later my horse down paths and through abandoned fields, too, with friends or alone. No one worried about groundhog holes or getting dumped (routinely.) My daughter didn't have the same spirit of adventure or daring and soon chose soccer over riding. So thanks Jami, for the trip to my own long ago riding days.

I'm so glad all of you enjoyed this post. I sent the link to each of my friends pictured here. We're still great friends, even though we may not see each other too often. When you spend 12 years of public school and 4 years of college together, you have a bond which lasts forever.

Nice blog with photographs. I like the ride in that area. cool information.