A Room With Two Views 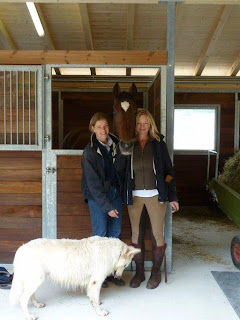 Yesterday was a big day at my stables, marking the inauguration of the horses’ new living quarters. After taking Kwintus and Gazelle for a short, relaxed plod to the village and back, Stephanie and I untacked them, and then led them up to their freshly constructed stable block.

It was an emotional, somewhat surreal moment for Stephanie. As a child, she’d drawn a picture of her dream stables, and now, decades later, was leading her horse “into” that very picture. I had goose-bumps and a lump in my throat as I followed her up, leading Kwintus and clicking photos, knowing how much stress and hard work had been involved in the process. Kwint and Gazelle immediately settled into their new stalls, clearly delighted by the added bonus of two windows with radically different 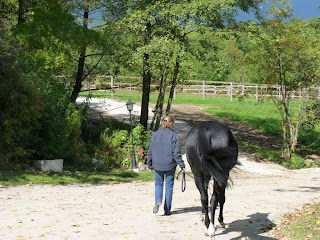 views. On one side the horses look out over the U-shaped stable yard where a regular procession of people and dogs provides them with constant entertainment, whereas their far window offers fabulous, relaxing views over fields, forests and mountains.
As an added bonus, and until sliding doors are installed, Kwintus can also enjoy peeking around the corner to ogle the feed bins, apple crates and goodie bags! 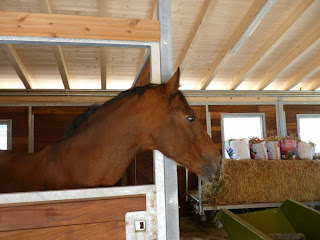 Once Kwintus and Gazelle were comfortable, Steph and I went to collect her two other horses from the field, one of which is retired, and the other slowly recovering from a tendon injury. Both horses have been turned out since late spring/early summer, but now, with nighttime temperatures suddenly plummeting, they’re happy to come back in before it gets dark. Then, at five o’clock, a new pensioner arrived, a handsome, 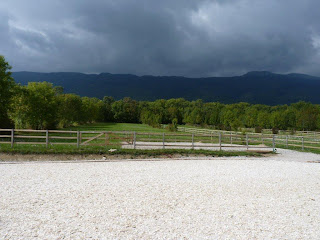 almond-eyed chestnut Lusitano called Talisman, who was assigned the stall beside Kwintus. Within minutes both horses were whispering nose to nose through the railings; apparently, the Portuguese/Dutch language barrier wasn’t much of a problem!

When Steph and I finally sat down to enjoy a cup of tea and a couple of the celebratory apple and cinnamon muffins I’d baked that morning, I offered her my congratulations, telling her how proud she should be of everything she’s achieved all on her own.

Steph sat back, munching her muffin, mulling things over. Finally, she smiled. “As of today Le Grand Clos is no longer an ‘écurie de blonde.’ It’s finally turned into 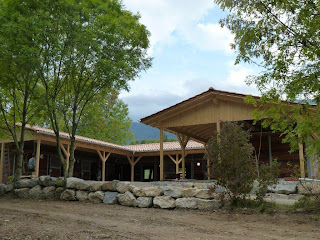 a professional stable.” (nb: the literal translation of an “écurie de blonde” is a ‘blonde stable’).

Upon which I became all choked up and tearful again. Come to think of it, we both did.

Frankly, I’ve never considered Le Grand Clos to be an ‘écurie de blonde’, nor do I think that anybody else possibly could. Every day, when I click the button to open the front gates and roll through in my car, I look around and think “wow, what a place!”. It really is breathtaking. 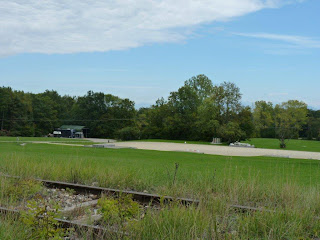 Steph’s project is far from finished. Administrative imbroglios have delayed the construction of the indoor arena until early 2011, but as of next week we’ll enjoy indoor facilities anyway thanks to the heated “bubble” she’s having installed over the recently finished smaller arena located right behind the new stables.

Not that I’m going to be doing much riding in the next few weeks as Kwint is having dental surgery on Saturday morning. I’m hauling him to a clinic in the Valais tomorrow afternoon, returning to collect him sometime Sunday. I’m not looking forward to the next few days; although I’m sure the operation will go well (a well-known equine dentist is flying in from Munich especially), I’m nervous nevertheless and will feel a whole lot better when my poor old horse is safely back in his room with two views.

I’ll let you know how it goes. Meanwhile, can I ask you to send him lots of healing vibes and the best of luck?

Posted by Francesca Prescott at 8:42 AM

Glad something positive has happened for you as well. It's been a tough week for you I know. Very special story. Thanks for sharing.

Best of luck with the surgery!

Cesca, what a lovely blog, my very best get well wishes for Kwint, I do hope all is well after dentist appointment! I have many videos of Tamara & I riding him at hoplands many years ago, one day when I have time & Tamara is with me we WILL get them onto a KWINTUS dvd & send over to you.. lovely lovely memories of him & so so glad you & Stephanie are his Mum's ! love & best wishes Kay (UK)

Francesca--I am sending Kwint my best wishes for a speedy, smooth recovery. Hope all is going well.