What I did This Summer Vacation
As always this summer, I went to horse camp – for the 40th year in a row at our family riding stable in the Cascade foothills. Okay, so it was horse day camp and I taught kids from 5 to 14 all about horses. These were kids who hadn’t seen horses before except on television. Now, we expected them to groom, saddle and ride by themselves. They had to lead their own horses from the stall to the various arenas, mount up, start, stop and turn on their own.


A new session of camp started each Monday and wound up with the horse show on Friday. During the week, the campers had lessons, trail rides and games on horseback. The kids learned to control their own horses and ride in games at a walk and sometimes a trot. And I rode with them a great deal of the time.
Often, I felt like the little girl in the commercial on TV, who wears a different color each day. I had a different horse for each task. My old Quarterhorse mare, Lucky Lady is my favorite – we’ve been together for 21 years and she can do it all. She could probably teach horse camp without me. She stepped on a nail in June, so she recuperated all summer after it abscessed under the frog.

Whenever I had a break from teaching camp, I soaked Lady’s right rear hoof in a mixture of iodine and Epsom salts. Then I poulticed it. Iodine wetted down the Epsom salts in a white mans’ sock – she wears extra-large ones from Walmart. Once I had on the sock, I went over it with vet-wrap and finished it off with duck tape. The next day, it started all over again, bring her out, cut off the day-old bandage, soak her foot, put on a new poultice. The shoer visited her every week and the regular vet consulted on the phone.

With Lady unable to work most of the summer, I rode Luckenbach – yes, she’s named after the town in the song. A Belgian/Quarterhorse cross, Luke felt like a tank, and often forgot that she can neck-rein and open gates. She’s big, broad and brave, unless a rabbit hops out of a brush pile. For fun, I occasionally managed to get an hour on SummerTime – he’s an Arab/Quarterhorse cross and the youngest of my trio. A retired show-horse, he can make even a novice look awesome and the biggest challenge I have is getting the teen students off him so I can ride him too.

August became a blur when my revisions arrived for my first book in 20 years. I did day-camp all day long and at 6 PM when the teens left, I headed for the computer. On September 1st, I finally finished the last correction. I said goodbye to Trace Burdette, my heroine who knew that 1887 Washington Territory was A Man’s World so she passed as one. She packs the guns to prove it and forks her own broncs and then she runs headlong into Zeb Prescott.

It was a fun book to write and I did model a few of the horses after ones that I’ve known, loved and lost – like my vet says, “We choose to love those who have a shorter life span than we do,” and that’s the hardest life lesson I’ve ever had to learn. But, those horses live on in my memories and now they shine in my book.

A Man’s World is a mainstream western romance and will be an e-book release from Siren/Bookstrand on Tuesday, September 21st. The link is http://www.bookstrand.com/a-mans-world
I usually write at night after a long day on the ranch. Some days are longer and harder than others, so I’m happy when I manage five days of writing in a week. As a substitute school teacher, I love the summer break but I’m just as busy, since that’s when we do horse day-camp.

Often, I feel like the little girl in the commercial on TV, who wears a different color each day. I have a different horse for each task. My old Quarterhorse mare, Lucky Lady is my favorite – we’ve been together for 21 years and she can do it all. She could probably teach horse camp without me. She hurt her foot in June, so she’s recuperated all summer and I’ve been riding Luckenbach – yes, she’s named after the town in the song. A Belgian/Quarterhorse cross, Luke feels like a tank, and often forgets that she knows how to neck-rein. She’s big, broad and brave, unless a rabbit hops out of a brush pile. For fun, I ride SummerTime – he’s an Arab/Quarterhorse cross and the youngest of my trio. A retired show-horse, he can make even a novice look awesome and the biggest challenge I have is getting the students off him so I can ride him too. 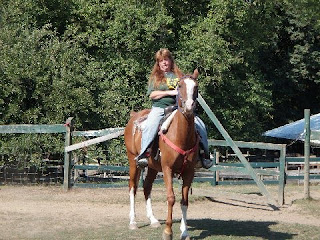 I live on the family farm, a riding stable in the Cascade foothills. I organize most of the riding programs, teach horsemanship around my day-job, nurse sick horses, hold for the shoer, train whoever needs it and write books in my spare time.
My mainstream western romance, A Man’s World will be a September 2010 e-book release from SirenBookStrand. It comes out in trade paperback next March. I just accepted SirenBook Strand’s offer on The Daddy Spell, a contemporary mainstream western romance. It will be out in January 2011 as an e-book and in trade paperback next June.
Equus, Canadian Horse, Country Extra, Horse & Rider and Western Horseman published my articles. Willowisp Press published two of my young adult novels 20 years ago. Each sold 50,000 copies and the rights have since reverted to me, but these two books are available online at HalfBooks.com I have B.A. degrees in English and History, and my Master in Teaching degree. I am a substitute school teacher for four local school districts. Being around teens all day provides plenty of inspiration for my young adult stories.

Posted by Jami Davenport at 5:21 PM

You have a busy life, Shannon! I look forward to reading A Man's World.

Zeb Prescott, hey?! I wonder if he's related to me!!!! Congratulations on your new release, I'll be looking out for it.