Donkeys in the Barnyard

Would it seem wrong in a blog such as this to admit that I love donkeys more than horses? Okay, I won't go that far, but let's just say that I love them both and for different qualities. And after owning and raising both donkeys and horses for quite a number of years, lets just say that I love Donkeys enough to devote an entire post to extolling their virtues, and their worth around the barnyard. So here goes:

1. Donkeys are funny. Their oversized ears, their comical bray, and their crazy antics around the barnyard will bring a smile to your face. And who doesn't need a little humor in their life? 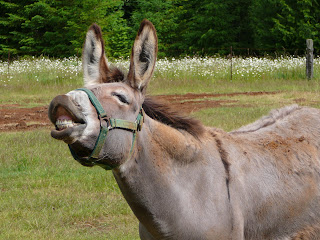 2. They are downright adorable. Ever seen a donkey baby, with the fuzzy forehead that they keep for the first two years of their life? Trust me, there is nothing cuter. 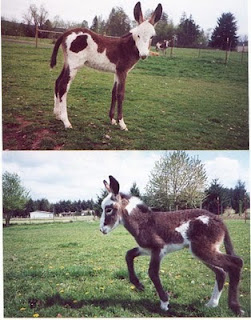 3. They are calm. Donkeys don't let very much upset them, which makes them an ideal companion for horses. While your horse might go winging around the paddock in an all out flight response, the donkey will be walking behind slowly, as if saying "hey, buddy, what's the problem here?" For this reason, they are wonderful to turn in with young or highstrung horses, or any horse that doesn't like to be left by itself. They are great partners for a horse that is low on the totem pole and not getting enough to eat, because almost any horse will lord it over a donkey, and become top dog again. And with time, after the initial newness wears off, they can even become best buddies. 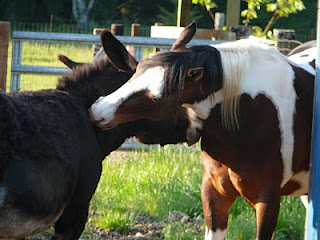 4. Donkeys are easy to keep. They seem to have more of an innate sense of self-preservation than horses do, and rarely hurt themselves. They get the same shots, the same hoof trimming, and they do best on plain grass hay without anything rich in their diet.

5. Donkeys are smart. (And I dare say smarter than horses, if you all won't hate me for it.) If you show them something once, they generally learn it. And they won't forget it, unlike a horse which normally needs constant repetition to learn. They are a bit different in their learning process (which is a whole nother blog post) and require lots of love and patience, but what human doesn't need to become more kind and patient? At any rate, having a donkey around causes no guilt, because (unlike a horse) you don't feel like you need to constantly ride it and train it.

So there you have five reasons for keeping a donkey around the barnyard. They do really fit in quite well with horses, and if you ever own one, you'll quite possibly be hooked for life.

Have you owned a donkey? Ever kept one as a companion to horses? What was your experience?

Email ThisBlogThis!Share to TwitterShare to FacebookShare to Pinterest
Labels: Donkeys

Never had a donkey or really been around them - they sound wonderful!

This was interesting. I had no idea about donkeys to this degree. Feel like an "ass" (hehe). They really are adorable as babies. Thanks for the info.

I got my first donkey when I was looking around for something as a companion for a pinto filly who wasn't doing well by herself (crashing over and through fences, etc.) The donkey worked beautifully, and I ended up selling the filly and getting more donkeys (and I've had them ever since.)

Truthfully, they are a lot of fun to have around because their equine minds work differently than horses (they take awhile to process information - they think on things awhile - and therefore are perceived as stubborn or slow.) So it's kind of like a puzzle to figure out how they work, but once you do, and once they trust you, they are sure a lot of fun, and they bond to humans much like dogs do.

My boyfriend grew up on a farm in Vermont and I asked him if he knew anything about donkeys and horses and he said he did. He said there were a few donkeys on their farm and he also told me that the old farmers also used to put goats in with the horses for companionship as well. Just thought I'd share that with you.

Barb - yes, I've definitely heard of goats as horse companions. I've owned a couple of goats before, too. They can be a bit hard on fencing though, because unlike donkeys they have a tendency to climb on it, or go through or over it. If you can work that issue out (perhaps with hot wire) goats would probably be fine. (You might ask your horse his preference, though ;-))

This is fascinating about donkeys! I've never had one or been around them, but they sound really interesting. Would love to hear more about how their training differs from horses. Isn't it interesting that in some ways, they are similar to horses (certainly in their looks, other than the ears), yet in other ways, are quite different.I think it must give you some extra insight into horses!

Jan - I'll do another post in the future with more on how donkey behavior differs from horses. It does give you an insight on horses, and also on mules, which are half donkey and half horse.

For me, it is fun to figure out all equine minds.

Aww, they are adorable. I love donkeys too and wish I could have a couple, but we aren't allowed to have donkeys in our neighborhood. Maybe someday (when the HOA fails and noone is around to enforce silly covenants).

I totally agree with your assessment of donkeys. We got a mini donkey a few years ago as a companion for our horses. Whenever my hubby would go out on a long training/conditioning ride, the horse that was left at home would run the fence calling like mad for his buddy. We wanted a companion that would be easy to keep and not take a lot of time. Our little guy fits the bill perfectly. However, we do spend lots of time with him giving and getting hugs. He is a funny, smart and extremely lovable boy! I think we will always have a donkey or two, or three!

This may be a silly question: but can donkey's be ridden? I've seen mules and burro's but I don't know if I have ever seen a donkey being ridden??

mommyrides - not a silly question at all - and I'll try to do another post to cover some of this stuff. But 1) yes, donkeys can be ridden and 2) donkeys and burros are the same animal. Donkeys come in all sizes, ranging from miniature to standard to mammoth, and the term "burro" is often used in the west to denote a standard size donkey that came from feral (once domesticated) stock, such as the BLM burros.