My Own Little Piece of a Legend

by Terri Rocovich
Like Alison, and I think most horse enthusiasts, I too went to go see the movie Secretariat last week. I think it is probably the best horse related movie I have ever seen, even better than Sea Biscuit which I loved. The acting was great, the storyline well laid out and the accuracy and quality of the racing scenes were exceptional. Finally, for once they must have had people advising on the movie that actually know something about breeding and racing. I was a race track brat, growing up around the tracks as the daughter of an owner and breeder so I have a love for the sport, even with all of its negatives and abuses, that ties back to many happy childhood memories.
But I also have added personal ties to the great champion. My beloved equine son, Pete, is a close cousin to Secretariat and while watching the movie, I was amazed at how many personality trait they share. Not to mention some obvious physical similarities.
Like Secretariat, Pete is a big, bright Chestnut with a white star and has a sizable stride, albeit nothing compared to the champion's reported 28' gallop stride. Pete also has heart far bigger than his 16.3" frame and will try more and work harder than a mere mortal horse and would probably give me a limb if I asked.
(This is the great one winning the Belmont.) 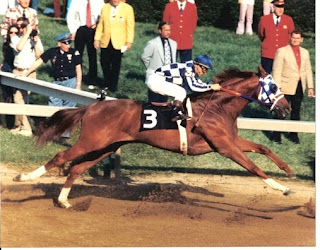 Pete has no less than 8 sires in common with Secretariat including Bold Ruler, Nasrullah, Citation, Hail to Reason, and Bull Lea. On his Dam's side his lineage goes back to Seabiscuit, Hard Tack, and Man O War. He is cousins to Kentucky Derby winners Round Table and Silver Charm on his Dam's side and Derby and Preakness winner Spectacular Bid on his sire's side. Sometimes I really wish Pete had been a mare, but then he then wouldn't be the Pete I know.
(This photo is of me collecting his huge stride on approach to a jump) 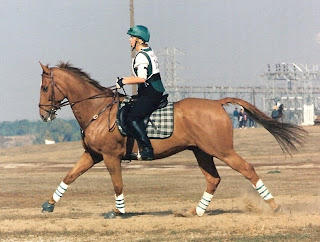 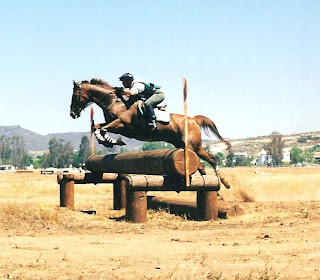 Another trait he has in common with Secretariat is that he is a complete attention hound and a total ham! He insists on being the center of attention whenever anyone is in the barn, unless he is eating, which of course is very high priority. He is also very kind and affectionate but can also be very temperamental and has to have certain things just so. For example, you must put on his bridle carefully one ear at a time, he hates fly masks and will generally only let me put them on and only certain people in the "Pete club" are allowed to put a blanket on over the top of his head. The whole time I was watching the movie I kept thinking, "oh my God, that is just like Pete". Isn't genetics amazing!
Pete, also known as "his highness" is nearly 22 years old and works full time as a dressage schoolmaster to a chosen few. Like his cousin, Pete has a very sensitive mouth and will not tolerate hard or restrictive hands, so I can't put some rider's on him until they are fairly independent in their balance. Pete also has a trot and canter that can be a bit intimidating to some.
I was at a show a few weeks ago watching one of my student's ride him and I thought about what I would do when Pete was no longer with me.
I choked myself 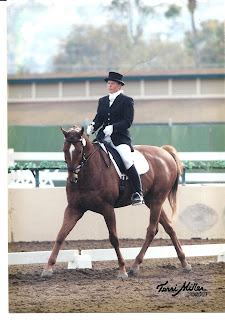 up and well, I just choose not to think about it further. I know that I will probably never have another horse like him both in the sense of his abilities and success competitively, but also in the bond we share. He is truly my soul mate and I just can't imagine the world without him. He is happy and healthy and rambunctious so here's hoping I don't have to contemplate it for a very, very long time.

Posted by Terri Rocovich at 7:25 PM

Terri - thanks for writing that lovely tribute to your horse, Pete. He indeed seems like a special horse, and how cool that he shares so much with Secretariat (and he does look a lot like him.) It's amazing how close we can get to our horses, isn't it? I hope you have many, many years left together.

What a lovely horse - you are so fortunate to have him in your life.

Terri--Wonderful photos of Pete. My own Gunner, who was/is such a special horse to me, is a happy healthy thirty year old, so there is plenty of hope that you and Pete will have lots more good years together. I wish the best to both of you.

I love Pete and his own personality and I've never even met him!

Thank you all for your comments. I am sort of like the obnoxious, cooing parent when it comes to Pete and I try to temper my enthusiam for him but after seeing the movie I just couldn't help myself. Laura I do hope that Pete gives Gunner a run for his money in the longevity department.

Terri - I loved your post, could really feel your enthusiasm and love for Pete! What fabulous photos, too.I admire the courage of cross-country riders; not for me, no no no no!!! I wish you and Pete all the best for many years to come.

He sounds like a very special horse - one in a million! I don't blame you for wanted to write this about him. I certainly understand wanting to occasionally brag about our special horses. And his connection to Secretariat is amazing.