From time to time we feature a guest blog from another horse author. Today we welcome UK author Jane Ayres, who has published several horse novels for children and teens. She also has a piece in WHY WE RIDE.

Sharing the journey
by Jane Ayres
When I was a child I avidly read every pony book I could lay my hands on.  My favourites were by the Pullein-Thompson sisters - Diana, Christine or Josephine - and I devoured tales about girls who were lucky enough to have a pony.  I wanted to be those girls, so I started to write my own pony stories.  With a twist.  Because, after pony books, my next favourite reading subject was ghosts and the supernatural.  So I wrote a creepy tale called Dream Pony about a girl whose perfect new mount goes unexpectedly berserk at a horse show.  It doesn’t end well for the girl or her pony, but it was the first story I got published by a short lived but wonderful UK magazine called Pony World.  I was 14 years old and the thrill of getting my work in print was….well, it’s hard to put into words.  (Ironically!) 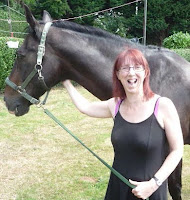 Since then I have written many “straight” pony tales but I especially enjoy combining two genres. Sometimes, the supernatural element is implied or ambiguous rather than explicit.  I am interested in exploring the dark side of characters (and horses), especially in my last few books, The Horse on the Balcony, Dark Horses, The Runaway Horse and Last Chance Horse.
But the novel I am currently writing reflects another thread that runs through many of my books.  Often the “life journey” of the characters, human or animal, is paralleled with an actual journey.  It’s only in later years that I have realized how much this figures for me - and how far back it all goes.  When I was 10, I started to write a pony novel which was never finished.  It reflected my reading influences, which, as well as pony books,  included a lot of Enid Blyton Famous Five, Secret Seven and boarding school stories. My novel featured two girls (whose names I can’t recall) and their ponies, Nutmeg and Shadow.  The girls are away at boarding school when they get the news that Shadow has been stolen, so, with no clues whatever, they secretly run away from school, with a few friends, and set off on a horseback mission to solve the mystery and get their pony back.  Midnight rides and picnics also featured heavily!


The second book I had published, in my mid twenties, was called Wild Horse Island and the main character is Zephyr, a wild horse who is taken from his herd on a remote island and begins a long journey to find his way home, encountering two lonely people whose lives he changes.  More than twenty years later, I was asked to update the story and extend it before it was republished as Zephyr of Wild Horse Island.  This book remains dear to my heart.  Years later, without even realizing it, I explored related themes in Coming Home, a rare non-horsey novel about a girl and her two Norwegian Forest cats who are tragically parted but, after many adventures, find each other once more.

When I got thinking about the stories that grip me as a reader, they often involved characters undertaking, often unwillingly, some kind of journey.  I like to feel when I am reading that I am sharing that journey with the characters, whether it is a girl trying to find her stolen horse, or a loyal pony finding its way back home.  I believe the act of reading, and writing,  a book is a kind of journey.  And I hope I will be travelling for a long time to come.

To learn more about Jane and her books, follow her blog: www.janeayres.blogspot.com or find out more about her books here:

Thanks so much for dropping by and visiting, Jane. European readers, have any of you read Jane's books?

How pathetic am I, reading this blog, hoping for a WONDERFUL, NEW BOOK to read (like I'm not already up to my ears in books???)

and then SO DISAPPOINTED because I've alread read/loved this book.

Pathetic. But I really loved the book.

I've got to say that the whole spooky/horse thing gives me chills--a totally creative idea--I just need to gather my courage, as I'm easily scared by anything like a good ghost story.

Like you, I loved all those English pony stories when I was a little girl. I used to sit on the floor in W.H Smiths and wish I could buy them all, choosing was so hard! I'm impressed with how much you've achieved. Good for you! xx Francesca

Jane, Thanks so much for joining us at EI. I'm going to pick up this book. It's sounds great.

Thanks for stopping by, Jane!

Thanks for lovely comments and thanks to Linda for giving me the chance to do a guest blog. I'm a bit of a newbie when it comes to blogging and social networking so lots to learn!

Francesca - when I was a girl I also would sit on the floor reading the books in WHSmiths until I got told off by the shop assistant! I walked to town every Saturday and spent all my pocket money on 2 pony paperbacks. Oh, those were the days.......

Jane, did you read "A Pony for Jean"?! It was my favourite!