I have been riding horses on a regular basis since I was about 2 years old which is nearly 52 years ago. (Yes, OMG I am really that old.) Even from a very young age I knew that horses would always be a part of my life in some way, shape or form. I didn't realize that I had the right stuff to ride, teach and train horses for a living until much later in life (my early 40s) and only after spending over 25 years in corporate America with what I term "a real job."

Along this path I have been blessed with many horses that taught me what I needed know to be a better rider, teacher and trainer. Amazingly the right horse has often come along at just that point in my equestrian career when I needed to expand my skills and education. One such horse is named Adel, a big black trakener/thoroughbred and sadly Adel left this world today at the age of 28.

They say that people come into each others lives for a reason, well I think that is even more the case with horses and other animals. Adel came into my life at just the right time when I needed to hone my jumping and dressage education to the next level. I had an amazing trainer back then, Shelley, but the horse I was competing at the time was limited in what she could (or wanted) to teach me.

Interestingly enough that horse was Charlie, the 33 year old mare I wrote about in my last post. As some of you might remember, Charlie had very clear opinions about several things and some of them had to do with jumping higher fences and accepting my leg enough to improve my dressage. Charlie was unpredictable and "hot" tempered much of the time so horse trials were either triumph or disaster and rarely anything in between. So when Charlie strained a suspensory ligament it was clear and a more suitable horse was in order but I had just bought my first house and money was tight to say the least.

As fate and luck would have it, Shelley had another student named Celia, who was off to Physical Therapy school and needed someone to lease her horse Adel. However, Adel was not always the easiest of horses to handle on the ground and he was a towering 17.1 hands so Celia needed to find the right match for him. Well it was kismet. Adel's occasional antics didn't bother me a bit and neither did his size and since Celia and I both trained with Shelley, Celia knew his training would stay consistent with what he knew. It was truly a mutually beneficial match made in heaven. Celia knew that I would take care of Adel as if he was my own and I got an amazing horse to learn on and compete for a few years. 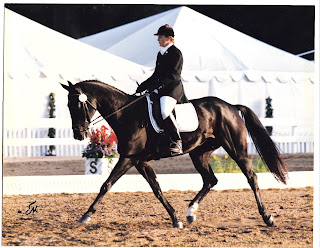 Adel taught me what a true half halt was and how to really balance a horse to a fence. At over 17 hands and long as a freight train, if you did not apply your aids correctly on Adel he would pretty much take you for a ride and pull your arms out of the sockets. If you rode him right, he could be as light as a feather and gladly do anything you asked. Without the skills that I learned on Adel, I would have never have been able to ride a horse like my Pete and subsequently without all that I learned on Pete I would be clueless on Uiver, the horse I compete today. Each horse enabled me to step up a level. Adel I rode Training level in Eventing and Second level dressage, Pete took 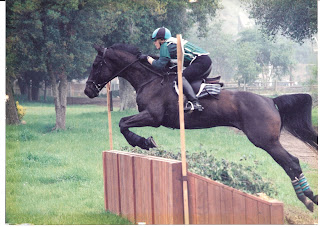 me to Preliminary in Eventing and Fourth level dressage and today, as a dressage specialist, Uiver and I are competing at Prix St. George and will soon move up to Intermediare. Looking back the progression seems so logical and I feel so fortunate and blessed.

Celia and I became good friends over the years I had Adel and remain close today. When she called me on Sunday to tell me that Adel was not well, I wished that I could have instantly hopped a plane to Texas where they now live and be with them both. Celia had Adel from the time he was born and other than the few years he spent with me, she has loved and cared for him his entire life. What a gift, don't you think? Celia refers to me as Adel's other mother and I consider myself honored to have known him and to have been able to ride him. 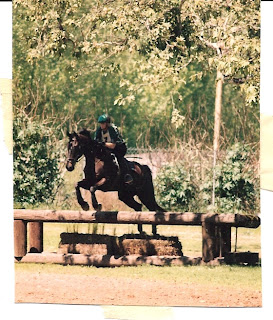 I reminisce and write this with a heavy heart tonight but I am comforted by the fact that Adel had a full and happy life and that he is now in greener pastures and healthy again. Perhaps he is with my mare Carrie, who passed several years ago and they are waiting to welcome Charlie and Pete when their time comes (which I hope won't be for a very, very, very long time) and they can all compare notes about a rider named Terri that they taught all that she knows.

It's hard to write an obituary for one of our animal friends without becoming maudlin but you succeeded here. What a lovely tribute to Adel. Celia was indeed a lucky lady to have cared for him all his life.

He does sound like a wonderful horse and that you had an excellent partnership. I'm glad you got to know him and spend time with him.

I'm so very sorry for your loss, Terri. He sounds amazing.

I let my mare go 2 months ago today and it's still hard to believe she's gone...they leave such an emptiness behind when they go, even with all the great memories we make together.

Terri--I know just what you mean about the right horse coming along at the right time. What a lovely tribute to Adel. And my sympathy to both you and Celia. I know how hard it is to lose a loved horse. So glad he had a long and happy life.

Thank you all for your kind thoughts. We have all been through it. Any of us who have loved and lost a fourlegged friend can relate. I got an email from Celia today and she read the blog and was very touched. Noone can comfort a horseperson like another horseperson.

Your tribute to Adel gave me shivers, Terri. And yes, I do believe that the right horse comes along at the right time. They all teach us something. It's great that you are riding St.Georges now, I wish I could come and see you ride!

Okay, okay pass the tissues. It seems this blog is filled with the passing of our friends. Well-written Terri and I -- the non competitor--almost swooned over your photos!

Geezzzz...I'm crying too and don't even own a horse. But Celia is my step-daughter and I know how much she loved Adel. Those pictures are amazing-I never saw her jump. Wow...I am now more in awe of Ce than before. Yes, greener pastures, Adel....from nonna.