Please welcome guest blogger Susan Larson today. Here is a little about her, in her own words:

I spent my adult years singing opera, oratorio, concerts, musicals, cabarets, anything that came along. What people don't know is, in my free time I would take my faithful Keeshond Gandalf to my secret country place and ride my horses! I loved and love all animals, nature, the outdoors, and my animals kept me sane. I can't ride any more, so my book Sam (a pastoral) is a valentine to all the horses I have known in my life. 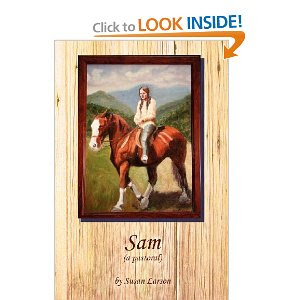 Here's the description from Amazon:

Ruthie Rossley loves horses more than anything. When her parents buy an old dairy farm Upstate, she struggles to persuade them to give her the pony of her dreams. When they finally relent, she buys the first horse she sees. Sam. He's huge, ugly, opinionated and rank to shoe. Ruthie, her sister Evvie and Sam learn to love and care for each other. Sam teaches Ruthie horsewomanship: that is, courage, patience, self-control and forgiveness. Often Sam's lessons are learned the hard way. Confronted with family strife and misfortune, Ruthie realizes it is time to use her horse sense on people: she must forgive her troubled father, and honor the patient courage of her mother. Can this young girl gain control her rage and hurt, and re-unite her family? Sam knows the answer. YA Fiction, 212 pages.

And here is the author herself, talking about her experiences:

Riding and Writing, by Susan Larson

In spite of being a horsecrazy kid who dreamed of beautiful heroic equines like The Black Stallion or The Justin Morgan Horse, the first horse I ever owned was Sam, who was huge, hairy, headshy, watch-eyed and rank to shoe.  Why did I pick him? I was desperate, and my Dad fronted me three hundred bucks, and Sam was the most horse I could get for that sum.

Sam was a prince.  Although in repose he looked ridiculous, he was a flashy mover and made a majestic impression. After he decided I was worthy of him, he condescended to do what I asked both on the ground and under saddle, as a personal favor. Sam understood what I said, and he also talked: he groaned in ecstasy when I scratched his favorite spots: he hummed in a basso profundo at the trot, and popped his lips in rhythm with his strides at the walk–perhaps in frustration that we were not cantering or galloping.

Sam obviously had some abuse issues from his past, and he didn’t care for men.  After a certain amount of wheedling, he deigned to stand for the farrier and the vet, but these were the only two men he ever cozied up to.

All our neighbors were convinced that this rampageous animal was going to kill us for sure, and some of them even told us so.  “That horse is not safe,” they said. “Sell him. He’s got those killer eyes.” We never sold him.  He never killed us.

Once, returning from a horse show, we hacked off Sam’s beard and fetlock feathers, blunt-cut his long thick tail and braided his mane.  He loved being fussed with and did not care that in our efforts to turn him into somebody else, we created a beast even homelier than before.  And we knew we had done a shameful thing, an insulting thing, to our horse.


I wrote a short story about the wonderfulness of Sam, which I sold to Yankee Magazine. Then I decided to expand the story into a book that would include the neighbors, the farrier and the vet, and my parents. I published the book “Sam (a pastoral)” this past year with a small cooperative press, Savvy Press. I’m hoping folks who read it will fall in love with my pal Sam.

The last horse I ever rode was by contrast, quite small. He was a rescue horse, an American-bred Icelandic, ill-used by ignorant owners who punished him for tolting, which is the Icelandic  version of the singlefoot.  I was over sixty at the time, suffering from back issues, but still looking to ride a little, and this horse, Adam, needed some gentle exercise during the week when his owner was at the office.  Sometimes Adam would tolt a bit if I asked him nicely.  I knew how to ask because I had learned the tolt aids riding in Iceland. I’ve written a story about riding in Iceland, which is published on my Authors Den page.

It was so much fun riding out on this little guy that I ignored my increasing back pain, took a lot of Ibuprofen and kept on doing it.  One day I could barely get on, but I was determined to go on that gorgeous autumn day.  Adam was in a good mood and offered tolt voluntarily, many times. Wheeee! Happiness! We skimmed along, tika-taka, tika-taka, so fast, so silky-smooth!

The next day when I lay in the hospital with acute back spasms, I had a thought.  The horse knew! He could tell I was falling apart, and he did his best to make it easy for me by offering tolt, which is very strenuous for the horse.  I never rode again after that.  But I think about these two steeds and many more, who have been so kind and generous to me.

Thank you for a very sweet story.