We've all read them.

Books that have a horse on the cover. Purport to have a stirring equestrian background. A title with a horsey term, something like, oh, I don't know... Flying Changes.

(I'm sorry, it is a beautiful term. But I have read at least three books with that title and there are more than half a dozen different books by that title on Amazon. I think it's been done.)

Anyway, books that supposedly have an equestrian bent, written by equestrians, but which are, in fact, written so that a person who has never been inside a barn and wouldn't know a poll from a stifle can enjoy them without having to look up a conformation chart.

As different as a poll from a stifle.

Every now and then I come across a book that just passes my strict "horse book for horse people" test. Sara Gruen's pre-Water For Elephants books. (One of which is called Flying Changes.) Barbara Dimmick's In the Presence of Horses.

For some reason I can't nail down, both of these are really melodramatic over-the-top emotional roller coaster books, but I enjoyed them, not least because they contained horse-people-only words like "Kopertox."

And that small little shout-out, that "Hey look I know horse things too!" cameo appearance of horse-centric words, was just the reality for a long, long time. If you were looking for a book that only appealed to a small, niche audience -- and shocking as it seems, I guess equestrians are a small, niche audience, maybe because most of them don't have time to read because horses -- then you just took what you could get and tried not to get overly annoyed with books that routinely described twelve-year-olds in red coats showing their ponies over fences or horses who were tied up by their reins while their riders picnicked or did a million other completely wrong things.

But e-publishing has changed things. E-publishing, and self-publishing, and tiny independent publishers have changed things. Now you can publish a book for the fraction of the overhead that the great big machine of agents and editors and illustrators and designers and printers and shippers and retailers and etc. etc. etc. have created for themselves. Less overhead means less investment is required. It means less sales are required to make it out of the red. It means the audience can be tighter, more defined, and, in the case of horse-people, more awesome.

Now we can have nice things that aren't for everybody. They're just for us.

I spent the weekend with two teenagers. 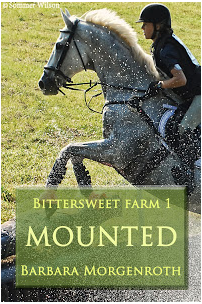 And their hot young trainer.

I was reading the first two books of the Bittersweet Farm series, by Barbara Morgenroth: Mounted and Joyful Spirit. I was really, really enjoying these books, not just because they are clever and witty and beautifully written, but also because horse people were doing horse things and they were doing them right and there wasn't a hastily written explanation for every least little thing the horse people were doing.

A horse could be put on the cross-ties, and that was that. I didn't have to slog through a paragraph about what a cross-tie was, or what it was for or why it was safer or anything like that. The book hadn't been dumbed down and over-simplified. ME GUSTA. 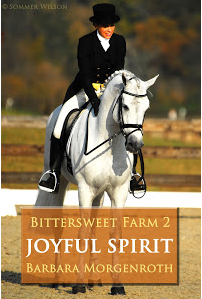 Horse people are happy, Natalie's happy, everyone's happy. If they're reading on an e-reader, they're even happier, because then if there is a term that they don't know, they can just look it up. On their e-reader. It's the magic of the Internets. They can look it up in 15 seconds, and they know it. Let reading be an educational experience (gasp!) and stop explaining everything. They'll figure it out and be smarter for it.

(Just ask my nine-year-old, who reads so many British books on his Nook, looking up the words he doesn't know as he goes, that he now gets notes on his spelling tests: "Please use the American version of the word.")

So hurray for horse books for horse people! There are more of them now than ever before. Maybe we can all live in a world safe from twelve-year-olds going to horse shows in red jackets forever more.


Posted by Natalie Keller Reinert at 7:02 AM

When I was a kid, my dad brought me British pony books from his trips to Canada. I still have them and having read the good stuff, I could barely stomach the series (initials SC, and others) with little girls riding stallions and "training" horses unsupervised after riding for six months and tacking up a horse out of the field in 10 minutes. Yeah, right. How does that "stuff" get published, anyway?
I like this blog because it introduced me to GOOD writers so I can look for and find horsey books that are worth buying. And I would buy them in hardcover if I could. (and have, Laura!)

That was a funny post! So true, but I love how you picked up on the girls in pigtails and red coats (maybe I added the pigtails...)tying their ponies to trees (did you mention trees?!) by their reins. Argh!

Incidentally, I still loved all those old-fashioned English pony books when I was a little girl, because I loved the idea of little girls riding stallions and training horses and winning shows within six months of starting riding! It was a dream! I wanted to be one of those little girls! I guess that's why that stuff got published, at least back then. I don't know what's being published in the same genre these days.

Anyway, your post made me giggle and smile, which is a good thing on a day where the news is so sad and gloomy and depressing. Thank you.

OOOOh, bad supposedly-horsey writing just makes me crazy. I have a definite appreciation for e-readers and strictly-niche publishing when it comes to OUR genre, for sure! Well-written horsey books were scarcer than hens teeth when I was growing up. I still have all the good ones I did find. My favorite is a rare gem called "The Show Gypsies," by Leigh Brown. Every detail is accurate and I absolutely reveled in it and still enjoy re-reading it for the illionth time.

P.S. I once got a 98 instead of my usual 100% on a spelling test, because in a fit of Anglophilia I spelled color "colour." My teacher would not listen to my reasoning. Boy, was I mad!

Do tell me at least one of you have set your Facebook to "English-UK" (it says "via mobile" instead of "via cell phone" for starters) and you spell things with an "s" and then have to go back and delete the "s" and add a "z" shaking your head all the while!!

I mean the "s" is even easier to reach on the keyboard. Surely editors should understand that "realise" is more of a pleasure to write for arthritic equestrian author fingers than "realize."

Yep, have a whole shelf full of those. Since I am still very much learning about horses, and I haven't reread this in a couple of years, I hope I'm not out of line suggesting "Horseplay" by by Judy Reene Singer. If I had read it during my divorce, I'd probably be sitting in a very different place by now ;) The ending, especially, will touch any horsewoman's heart.

agreed 100%! Carolyn Banks had a wonderful series of mystery books in the '90s that had dressage as the background theme - very enjoyable and unabashedly horsey. I don't think they've made it to e-reader yet but worth picking up whenever you can find them. Other "horse" books have been somewhat disappointing - where the "horse-theme" on the cover is never really supported by the story... I very much enjoy the ones that these authors on this blog have offered :-)