Good morning! I write this blog post from my sofa, instead of where I usually write them: sitting on the subway, typing into my iPhone.

This is a nice change!

I recently went back to the full-time writing life, after spending a year with the mounted unit of the New York City Parks Department. It was an absolutely incredible experience, and I'm so happy to have had it. I mean, how else can you get pictures like this? 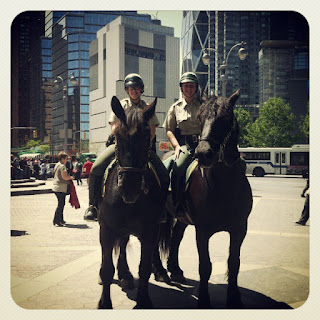 Oh you know, just patrolling Columbus Circle, like you do!

But a lot of factors came together all at once, and it became apparent that I was going to have to leave the day job... and go back to my old job.

You know, that one where I sit at a desk all day and make things up. Not the worst fate in the world.

And it's excellent timing, as I have quite a few projects to come, including the third novel in my Alex & Alexander series: Turning For Home.

I wrote here about how I never expected The Head and Not The Heart, my first novel, to turn into a series, but that it just sort of happened. That's exactly what happened with this new project. Right after I released Other People's Horses, the second book, I was heading into Manhattan for some reason and rejoicing in my freedom from writing, however brief. It gets exhausting, writing a novel, when you are also working full-time with horses and trying to be a functioning member of a family besides.

So I was sitting on the train, and I pulled out my phone, and it didn't have anything I wanted to read on it, and then suddenly I was typing furiously and I had the first chapter of Turning For Home written before I got off the train.

What's that about, right? I don't know. Books just happen to you, with enough practice, I suppose.

I won't say too much about Turning For Home right now because it is in its infancy and anything could happen. But I wanted to touch on racehorse retirement and retraining Thoroughbreds, the subject of my website Retired Racehorse. So that's in there.

Besides the latest Alex & Alexander, I have two more novels to release this year. Both are already written and are waiting for me to dust them off and do final edits already. And when I say "written" I mean "written and then re-written five or six times."

The first one you'll probably see is Ambition, which follows a ruthlessly ambitious young eventing rider who is out to make her name whatever the cost. She'll steamroller anyone in her way in order to get to the top. This is a girl who has been the working student all of her life, watching the rich kids go on trail rides while she stayed behind to clean stalls, and consequently has a chip on her shoulder the size of Montana. When an apparently wealthy rival trainer offers her help, she brushes him off with no uncertain words. But everyone needs help eventually, and she finds herself in so deep that all she can do is give up her prejudices and trust in her enemy.

The second one is The Daughter of Horses. This novel is a completely new direction for me: fantasy, and follows a fairy tale that I've already been slightly obsessed with: Beauty and the Beast. Loosely set in England in the early nineteenth century, The Daughter of Horses features magic, romance, a traveling circus, and angry villagers. Oh, and horses. So many horses!

So there you have it. My summer is going to consist largely of getting these books out to you. Turning For Home, Ambition, The Daughter of Horses. So here's my question to you: which one should I concentrate on first?

Oh and by the way, The Head and Not The Heart is currently 99 cents, if you haven't given it a try yet, and all of my books are currently available for free lending via Amazon Prime. If you have a Nook HD, you can download the Kindle app and read your Amazon purchases that way. You can also check out the beautiful paperbacks if you're an old-fashioned kind of reader! Thanks, and keep it horsey!

Posted by Natalie Keller Reinert at 5:44 AM

You should take part in a contest for one of the best blogs on the web. I will recommend this site!

Natalie--I hope you'll do a post on your mounted police experience with more photos!

Good luck with writing full-time. I never could do it despite the # of books I have had to churn out (too much sitting on your butt typing. . )