My Life With Horses--Part Three 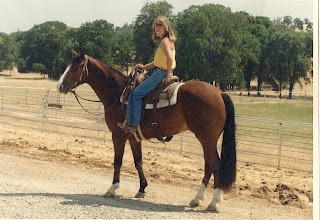 I've had very similar experience at hunter/jumper barns. They really aren't as cruel as many other horse trainers, but they are in a big hurry to win ribbons. They also play games with commissions. I also ended up buying a sale horse and keeping him the rest of his life.

Gunner got lucky, and that's the important thing.

I was lucky with Mocha. My trainer (who's also a judge) tends to go the slow route, and she was supposed to be his personal horse. But she hit some training snags, and he had medical issues at the time, so he sold her to me--when his wife scolded him for selling Mocha, his response was "But I sold her to Joyce!"

They're like her grandparents now, really. Trainer's wife imprinted her at birth, and she still views him as Special Person. It took six months for her to transfer her focus from him to me, but I wasn't surprised by that.

He's somewhat retired from training now, does college classes, lessons, clinics and judging. Always been quiet and patient. Will work with greenies and rehabs. I learned a lot from him, but he's also not shooting for the high levels of competition these days.

(And to put Gunner's price in perspective for current day--I paid the same price for Mocha in 2005. A real deal, as similarly bred young mares were going for twice the price)

redhorse--Its been my impression from talking to others and from those who interact on this blog that most competitive horse disciplines are somewhat similar, though some are worse than others. People push horses too hard because they want to win. That tends to be the bottom line. I still have Gunner (I know you know). He is thirty-three, still pasture sound, and munching his breakfast down in my barnyard as I type this.

Joyce--Your trainer has always sounded like one of the good ones. I worked for half a dozen different trainers and two of them (cutting horse trainers) were very much as you describe your trainer as being. They really cared about the welfare of the horse and they were pretty honest. Not ALL trainers are willing to be cruel. Its just, unfortunately, a common problem when winning is involved.

I have no idea what a good cowhorse prospect sells for these days (what with the recession...etc). I bought Gunner in 1983 and I paid what would be considered a reasonable but not bargain price.

This is brilliant stuff, Laura, it reads like one of your novels! I can see where you got a lot of your inspiration from.

Martine--Thank you. It is true that a great deal of the material in my novels was drawn straight from my life. Names were changed to protect the innocent--and the guilty (!)

I can't tell you how much I'm enjoying getting ALL the backstory on your horses!!! Thank you again, and thanks for your honesty in describing your feelings and emotions. I would have been bawling my head off giving a horse I loved a bath so he could be sold.... I'm so glad Gunner became yours instead. :-)

Enjoying your horse life stories too!

Thank you Riderwriter and 14.1 hands. I'm glad to know you are enjoying my stories. Posts of this sort, by their nature, don't generate a lot of comments, so I'm always pleased to hear that readers are enjoying them.