As I said in my last post (My Life With Horses), I bought a bay horse named Burt when I was about twenty-one because he looked like the horse I had idealized in my childhood-- Mr Softime. I had just sold a horse named Hobby and I actually meant to take a break from owning horses, but I went to look at some Queensland Heeler puppies with a friend who wanted a pup, and the first thing I saw when we drove up to the ranch house was this bright bay gelding who looked just like Mr Softime charging up and down in the pen next to the barn. And I left my friend to go look at the pups by himself and went to lean on the rail and look at the horse. 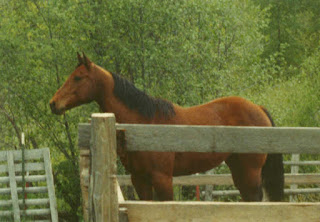 I soon found out that Burt didn’t belong to the ranch owner. Burt belonged to the owner’s friend—an eighty year old man who had spent his life raising Quarter Horses. Burt was the last of the old man’s line and the only horse the old man owned now.
“Does he want to sell him?” I asked idly. I really liked the look of Burt.
“I dunno,” the rancher said. “The old guy sold his ranch, so he doesn’t have a place to put the horse. I’m keeping him here as a favor. Nobody rides him.”
“Is he broke?” I asked doubtfully.
“He’s five years old and a good ranch cowboy put 90 days on him when he was three. Nobody’s ridden him since. But the old man says he doesn’t buck.”
Well, I thought, it could be worse. And I took down the old man’s phone number and called him that night.
The old man said he didn’t want to sell the horse particularly, but if I wanted him I could have him for $2500—which was a pretty steep price for a green broke five year old of ranch horse type breeding in those days.
I said I would give $1000 for the horse. And the old man said he might possibly take $2250. I said I would give $1200 and not a penny more. The old man laughed. And I shrugged and told him to take down my phone number in case he changed his mind.
A month went by and I pretty much forgot about the bay horse. But one night the phone rang and it was the old man and he said he would take $2000 for the horse. This time I laughed. And I offered him $1250. In the end, I bought Burt for $1500, which was a fair enough price and about half of what I had sold Hobby for. So I felt like a smart horse trader. Except I didn’t really know what I had bought. I had never ridden Burt or seen him ridden. I hadn’t vetted him. I bought him on his looks alone.
Fortunately, Burt did turn out to be pretty sweet for a green broke five year old. I hauled him to a nearby boarding stable and saddled him up and rode him, and though green, he did not buck, and went just as if he had been ridden yesterday instead of two years ago. Burt was always an honest horse.
I spent my last couple of years at college riding Burt through the hills and trying to get him broke along the lines of a reined cowhorse. As with most (all) horses, Burt had his good points and his bad points. He was consistently kind and willing and pretty bold. He wasn’t afraid of much. There was no quit in him. He was also what English riders call “forward.” He was always trying to go faster. His lope wanted to escalate to a gallop. His walk wanted to be a trot. And thus his most aggravating fault was the fact that he jigged. Relentlessly.
Every trail ride eventually turned into a struggle. Because Burt insisted on jigging/prancing/trying to trot the whole way home. And nothing I knew how to do deterred him from this. He was completely under control at all times and his jig/prance was very smooth. I guess some folks might have liked it—he looked just like a parade horse with his neck bowed up, prancing along. But I found his jigging very frustrating.
Still, there was much to like about Burt. He was, essentially, a safe horse, and he was a cowy horse and he was a sound horse. And I just liked him. When I left college I took a job on a commercial cattle ranch and I brought Burt along to ride as my ranch horse—and other than the jigging, which he still did and I hated—Burt really excelled at this job.
I gathered and parted cattle on him in wild wide open mountain terrain, in the dark and cold and at five AM on winter mornings, in the deep mud, in the snow, in high winds and in driving rain. I crossed creeks and scrambled up and down steep mountain slopes and pushed cattle through a big culvert under the highway and through many different ranch alleys and corrals. Burt stayed honest, never gave me any grief (besides the jigging) and always did his job. He would face off a charging mother cow without a flinch. He absolutely never quit me—and had plenty of go left at the end of a twelve hour day. All the ranchers and cowboys admired him and tried to buy him. He could do a pretty sliding stop and a fancy spin, he would watch a cow really well (well enough to place at a low level cutting), you could corral rope a steer off of him, and he would pack anybody that could deal with his “forward” quality. He was a truly gentle and reliable horse. My stock with the cowboys always went up when they found out I’d trained him myself. I could easily have sold him for $5000 (I was offered this more than once), but somehow I couldn’t bring myself to sell Burt.
However, I did leave the ranching job after a couple of years and went to work for a cowhorse trainer as his assistant. I rode some pretty fancy horses in that barn and my aspirations began to be a bit higher than a mere ranch horse. And thus came Gunner.

Despite the jigging, which probably annoys me more than any other riding horse habit, Burt sounds like an absolute dream <3

Dom--You and I are very often on the same page (!) Cause yeah, jigging probably annoys me more than any other riding horse habit, too. And I absolutely COULD NOT cure Burt of doing this. After I retired him, I swore I would never own another chronic jigger. However, I did keep Burt until he died...he was a fine horse in every other way and very good hearted.

Looking forward to the rest of the story!

These stories are a wonderful treat, Laura. Was Burt your first official heart horse?

I really like those "forward" horses, even if gigging comes with the territory. At least it is a minor vice.
:-)

Val--Burt was the first horse I kept until he died. He was five when I bought him and he died at 35, so I owned him for thirty years. I'm never quite sure about the term "heart horse." I've had five horses in my life that have been "my" horses. I guess that means they each had a piece of my heart. So yeah, in that sense Burt was my first heart horse. And then I've had two horses that came to me for my son. So seven heart horses in all. Three are dead (and buried here) and the other four are still with me and will be with me until they die. And if I die first they are provided for.) I guess that's what heart horse means.

I have not heard the term defined before either, but I think you did an excellent job: a horse that is yours and you love. Your son's horses would certainly qualify since you trusted them to carry your most precious cargo.