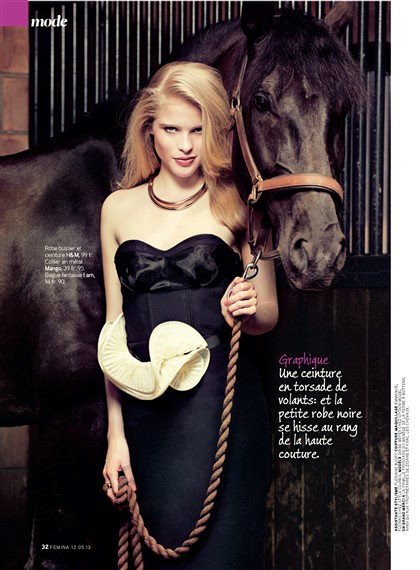 Some weeks ago I was approached by the owner my stables asking me whether I’d be okay with Qrac taking part in a fashion photo-shoot with Fémina, a Swiss magazine. The magazine had called him the previous day to talk about the project; the photo-shoot would have an equestrian theme, and they needed to a couple of nice horses for their model to pose with.

I love fashion magazines, so was excited and agreed immediately.

So, a few weeks later the photographic crew arrived. They were incredibly lucky with the weather as they got one of the few sunny days we’ve had since, well, I don’t know when. The weather has been atrocious since last October over here in Switzerland. It’s almost June, yet the forecast for this coming weekend is snow down to 700 metres, with rain and wind and shivery temperatures for everyone below. Yippedy skippedy. And I have a show on Saturday. But that will be another exciting tale to tell!

Anyway, the crew settled into the saddle/coffee room of the stables and spent the first three hours or so doing the model’s makeup and hair. Then they went outside and took some photos of her looking all pouty and seductive while leaning against the barn door, a saddle by her side. Again, this took forever; I’d already had time to ride Qrac, clean my tack, and down umpteen cups of coffee before they were even close to ready to move on to photographing the model with my horse.

But eventually it was Qrac’s turn to face the camera. I was a little concerned he might be worried about the giant light reflectors and other photographic paraphernalia the crew was lugging around; I’ve mentioned before that he’s not the bravest horse on the planet, but the only eyelids batting were the model’s. Qrac seemed to enjoy posing with this pretty young blonde, and I was very proud of him.

The editorial finally came out the weekend before last, and I got a real kick out of opening the magazine and seeing my horse looking absolutely fabulous!

Don’t you think he looks handsome?! Have your horses ever been photographed for a magazine or an advertisement for something?

Posted by Francesca Prescott at 10:08 AM

Wow! Qrac looks very glamorous. I've been photographed with some of my horses for both magazine and newspaper articles. I am always amazed at how long the whole process takes (a couple of hours or more) and how many shots are taken. But the results have universally been great--and I am far from the most photogenic individual. I have learned that some of my horses photograph better than others. I am impressed that the fashion photographer did such a good job with a dark horse--those are the hardest ones to photograph, I think. But Qrac looks stunning. Far outshines the blond model (!)

Wow Qrac looks so amazing! (It's Alexia, Julie's Daughter) Dad's horse was in the film robin hood that came out in 2010 but thats it. I can't believe he stayed so calm with all the madness going on around him! xx

He's so beautiful. I love how they lit his pretty face.

It's comforting to know that it required 3 hours of professional help to look that good. :)

All I see is big handsome horse.

Oh wait there she is.

Sorry I had to screw my eyeballs just right so that I couldn't see Qrac and then she showed right up.

Its my sickness, I only have eyes for horses. :)

Laura, it's crazy how long photoshoots take, isn't it?! I knew they took forever because I did some modelling a million years ago, and my daughter is a photographer, and I often have entire fashion crews and models at the house when she's home from university. Awww, that poor blond model was a sweetie; she didn't speak much French as she was Swiss German, and believe it or not she was allergic to horses and hay!!! Her agency hadn't told her it was a shoot at a stables, and her poor nose got redder and redder, and they kept on having to retouch it with makeup. And I tihnk she was totally out of it on anti-histamines!
And yes, dark horses are hard to photograph; my daughter always grumbles when she comes to take photos of us in the indoor arena!

Hi Lexi! Nice to see you here! That's SO COOL that your dad's horse was in the Robin Hood film!!!! Definitely trumps Qrac's little photoshoot! We'll have to get my horse an agent...but then again, I don't think he'd do very well on a film set. Far too chicken!

Thank you Yatima, I tell him he's beautiful every single day :)

Thank you for reading and commenting.

Cindy, you're funny! Poor allergic blond girl :) Would you have noticed the model if he was a hot semi-naked guy with a six-pack?!

Thanks so much for reading and commenting!

Nope...unless it was Buck Brannaman, then I would have noticed.

Personally, I don't see the model in that picture at all... all I see is your handsome horse! He looks like he was born to be a centerfold in a magazine!

He's so gorgeous! They lit him very well - it's hard to get any detail on a black horse. He looks so serious, too, like he knows he's doing his job.

My little red mare was used as a model for this season's Hobby Horse catalogue. We had our doubts about using her, since she can be super-spooky about new things, but it turns out, she loves to pose for the camera. They fell in love with her and will probably use her again.

They used my black gelding once, and it took forever for them to get the pictures in between his wiggling around and trying to chew on everything within reach. When the photographer came to take pictures of him for his book cover, she got some great shots. When it came to the author picture of us together, we used his antics to show his personality.

If that had been my mare, she would have shed hairs all over the model, then wiped her nose on the poor girl's dress.

Years ago I owned two black stallions. I appeared in a tourism promotion film as Count Dracula driving the pair pulling a black carriage. I got to wear a black cape and hat, luckily it wasn't a close-up shoot so no false teeth were required. The two stallions looked lovely, as they always did. It took quite a number of passes up and down the forest road to get the "right" shots.

WOWOWOW--and that's for Qrac. To heck with the lovely model!