This is going to be the last in my small series of posts about the way I learned to break and train ranch horses. I had meant to go on and explain the bitting up…etc, but I’ve run into a snag. A mental snag, anyway. I grew up on ranches and with ranch horses and I understand exactly what these methods can achieve when they are applied with skill by a good horseman. But in writing these posts I realized that I cannot impart this experience into words. As I said in the introductory post, none of this will work unless you can read a horse. No method is much good unless you can read a horse. If you respond to a fearful horse thinking he is challenging you, or a rebellious horse thinking he is fearful, you aren’t going to get good results. And so I find myself at a loss to explain how we knew when to push on and when to hold back. We read what the horse was feeling/thinking and responded to that.
These methods are very effective at producing broke horses, if you are a competent rider and you can read a horse. I learned them from competent horsemen who were good at reading horses. Not from a book, not being told a tale, but working beside these men and women, and under their direction. I learned by working with literally hundreds of horses. And this is the way to learn—not by reading my blog posts. Or by reading pearls of wisdom from horse gurus…etc. Someone posted a little quote from a well known horse guru the other day along the lines that you had to change your demeanor in response to a horse’s emotional state. I will admit that I rolled my eyes and thought “Duh.” Can you say “learn to read a horse?” All good horsemen do this, no matter their method of breaking and training.
I’ve become all too aware that I can’t really explain this to people in a way that translates to real life. I’m also aware that among the people that read these posts there is a small subset that have done quite a bit of breaking and training of young horses and have been around it their whole lives. In this group, no matter their specific background, there is real understanding of what I am talking about and how it might work—even if the person in question has used vastly different methods. But by far the majority of readers have not done much if any breaking/training. They may have ridden a green horse or two, and they may have participated in breaking/training maybe one or two colts. Their ideas about training are largely based on how they work with their already-broke-and-trained-by-someone-else horses. And, in fact, their thinking is often all about what was done wrong in said breaking/training such that their poor horse is not trusting. Sometimes they have a good point. And sometimes they are missing the point completely (in my opinion—obviously). But one thing is for sure, they haven’t been the one putting the first rides on a bunch of colts. Like everyone else, these folks are entitled to their own opinions, and I have nothing but respect for them if they are having a happy life with their own horses. But we can’t exactly discuss breaking and training methods on an equal footing. What works in theory is not always (or even usually) what works in practice. And the things I am writing about here are things I learned that work—and know this because I learned them by actually climbing on a bunch of colts and doing the work to set them on the path to being broke horses.
So I sometimes have a hard time with the sort of discussions that come up with people who actually have not climbed on a bunch of colts, but boy do they think they know how it should be done.  Such people have in the past said/implied to me that these traditional methods are harsh and “kinder/gentler” methods work just as well. All I can say to this is that until you have actually done the work of breaking colts and produced some well-trained horses that stay reliable under pressure, you don’t really know what works and what doesn’t. By all means you should work with your own horses as you see fit and I wish you and your horses health and happiness.
The other thing that bugs me is the fear that someone will try this stuff in their own backyard, never having seen it done by a competent horseman, not knowing how to read a horse, and with no idea how badly things can go wrong. This haunts me. So I’ve decided not to talk about the bitting up and the later training that we did. There is so much potential for it to be abusive and for a real wreck to happen—even if the horseman means well-- but hasn’t had a lot of experience.
So far everything I’ve talked about is pretty straight-forward, though I will stress again that to get good results you have to be able to read a horse and respond appropriately to what he is communicating. This last post will talk about what we tried to get done in the first month of riding. 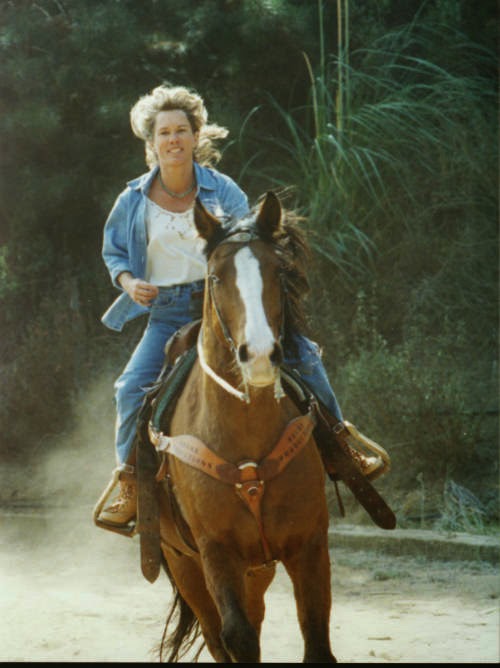 I’m not going to talk about the way we taught these things, for the reasons I explained earlier. Without watching an actual horse respond to cues, my descriptions just won’t tell you that much. And there is much potential for abuse and/or a wreck. Find someone you like and trust and work with/learn from them. Choose a person who produces calm, confident, relaxed, well broke riding horses that seem content and you won’t go far wrong. Hopefully this brief series of posts has given you an idea how we began the process of making ranch horses that were reliable throughout their lives and a pleasure to ride.

I understand how hard it can be to explain the "feel" and timing needed to read and train a horse.
I think that is why there is such a low success rate for people following the popular clinicians to actually transfer it to their own horses.

I have been exposed to a lot of disciplines and they all have their own ways of starting colts, but the good ones follow a similar protocol to the one you are describing. They usually turn out solid citizen type horses that are useful.

The problem I have seen lately is now that we are getting several generations removed from the old time horsemen, the tried and true ways are getting lost, and horses aren't as broke as they used to be. Trainers are more focused on getting the horse competition ready and less concerned about giving the colt a good solid, low stress beginning.

I see less good basic horsemanship at every level and every discipline. There are of course exceptions and some young trainers do an excellent job, but over all I have seen a steady decline in the quality of horses they produce. Especially in the longevity of the horses careers and their mental and physical soundness.

I enjoyed your training series and I think you gave some valuable information. It is hard given the constraints of the written word vs hands on experience, but I'm sure people got a clear idea of the methods you successfully used.

Thanks for an insightful comment, Jan. You are one of the readers/commenters who obviously has done her fair share of breaking and training and understands what works and what doesn't. I agree that I see/hear about far more horses that are not really broke (by my standards) than I used to. I agree that competition is the root of much of the problem. Most of the abuse that I have seen is directly related to competition. But I also see a lot of people putting up with very ill-broke horse behavior as if there is nothing wrong with this--as if it is just a personality quirk of the horse. Whereas in reality it is behavior that could get the rider hurt or killed and is a direct result of inadequate training.

I have enjoyed and appreciated these posts. There is so much hard truth in them. They were timely for me as I am re-starting 3 horses that were started and messed up due to folks not appreciating the importance of feel and applying some popular clinician's method blindly. All three are spoiled, disrespectful, and unsafe, but they have good minds and need to become solid citizens with jobs.

Anon--Thank you. I'm glad you enjoyed the posts. I think that as far as I went with them they were pretty clear, and possibly useful, but I just bogged down on trying to explain the bitting up and other things we did later on. Unless you can read a horse there is so much potential to do harm...and yet the techniques are very useful if you know how to apply them.

Good luck with your projects. I hope you succeed in making some solid equine citizens.

Feel--if you've got it, you can make so many odd little intuitive leaps that are in themselves hard to explain but work. If you don't have it, God bless you, cause you will need that on your quest to find it.