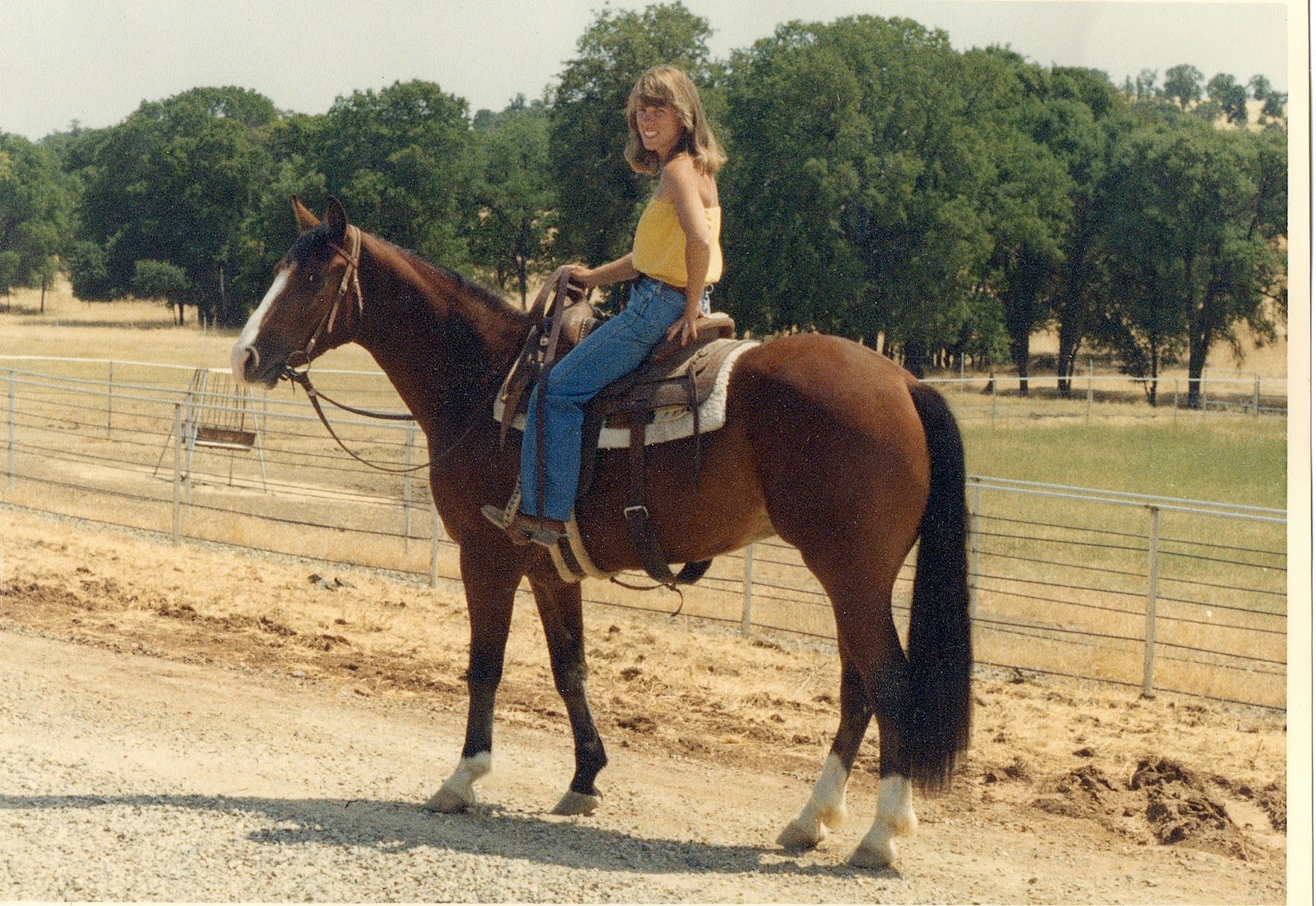 Gunner as a three year old—a green broke horse—I had put about ninety days on him at this point.

Again, there are interesting differences and interesting similarities with what I've seen. One very well respected breaker of TBs I knew in Ireland was similar to your approach in that he didn't want anyone holding the horse when he mounted. He didn't want to have to worry about anyone except himself if the poop hit the fan! His weird quirky thing was that, the day a youngster arrived for breaking (usually 3year olds for national hunt racing), he tacked it up, lunged it and, all going well, brought it to a spot in the alley between some stalls, where the concrete floor was like polished marble after years and years of traffic, lie across him a few times and then sit astride. The baby horse would be so worried about keeping his feet under him on the slippery floor that this always went smoothly - he never had an accident doing it. His rationale for doing this the day the horse arrived was that there had already been so much happening to the horse that day, this was just going to be one more strange event to be processed. He read his horses well and if he had a fighter on his hands he wouldn't back them on day one. He had a great reputation for producing well behaved racehorses who could go on for other careers (eventing, jumping, hunting) if they weren't fast enough but I think the secret of his success was his ability to read a horse (as well as his stickability. He could sit an exploding TB like no-one else)
Another producer of hunting horses that I knew used to back them in a bog - literally knee to elbow deep in mud - so that they couldn't throw their full arsenal at the rider. A similar approach to the tying up of a leg that I mentioned before... I had two horses broken by him in my yard and they were both stubborn & pig-headed for their owners. I think they were broken to be ridden by him or someone else very tough but not by an average rider.
In both cases, I think the methods used were not ideal and at the time, even though i greatly respected the TB trainer, I felt that there had to be a better way.

Martine--Not knowing the trainers you speak of, I don't have an opinion, but I have seen the slippery surface used, and also deep ground and/or water. I never tried either of these things. I will say, however, that the horses I broke using the methods I talk about here were none of them stubborn or pig-headed in later life--they all made good, reliable broke horses. So I feel that the methods worked and if I were to break colts today, I would use this system. I have seen a great many horses who were babied along and trained in"kinder" fashions that never ever became what I would call reliably broke. For the rest of their lives when they felt like sulling up and defying the rider/handler, they simply did so. Anyway, it's interesting to hear the different methods that are used.

Absolutely, you can overdo the 'babying' and you can overdo the 'insisting'. I think the best method lies somewhere in the middle ground but especially to remember that there is no One Size Fits All method of training. Every horse is different.
I really like the Emergency Stop you talk about and that's something that was definitely overlooked by every breaker I knew. Including me - I broke a couple of ponies I had bred and maybe 2 or 3 horses. If I'd know as much back then as I know now of pressure/release timing and of the One Rein Stop I'd have done things differently.

Agreed. Every single colt required a slightly different modification of these basic steps. Some needed a LOT of one thing, and others needed very little to none of that thing. And I'm all for the middle ground. I have to say that from what I see/read about, the overwhelming trend right now is to do way too much babying. People think this is kinder and completely overlook the sad fate that comes to a pushy, spoiled horse, especially one that has hurt his rider. The way we trained ranch horses, if the individual trainer was kind and skilled, we had a really good percentage of them turn out solid and reliable. Like 85% or so (which is allowing for the fact that we got all sorts, including some pretty snorty ones). And I think there is a reason that people of all disciplines think of ranch horses and rope horses as really "broke" dependable horses. This method of training is part of the reason. But yeah, I'm prejudiced. I grew up riding/training this sort of horse, and I really love them. I also understand the combination of the good solid QH mind and the steady, clear training methods that "make" these horses what they are. Still, no doubt if I had dipped into other disciplines, I would probably have seen different methods and perhaps thought differently.