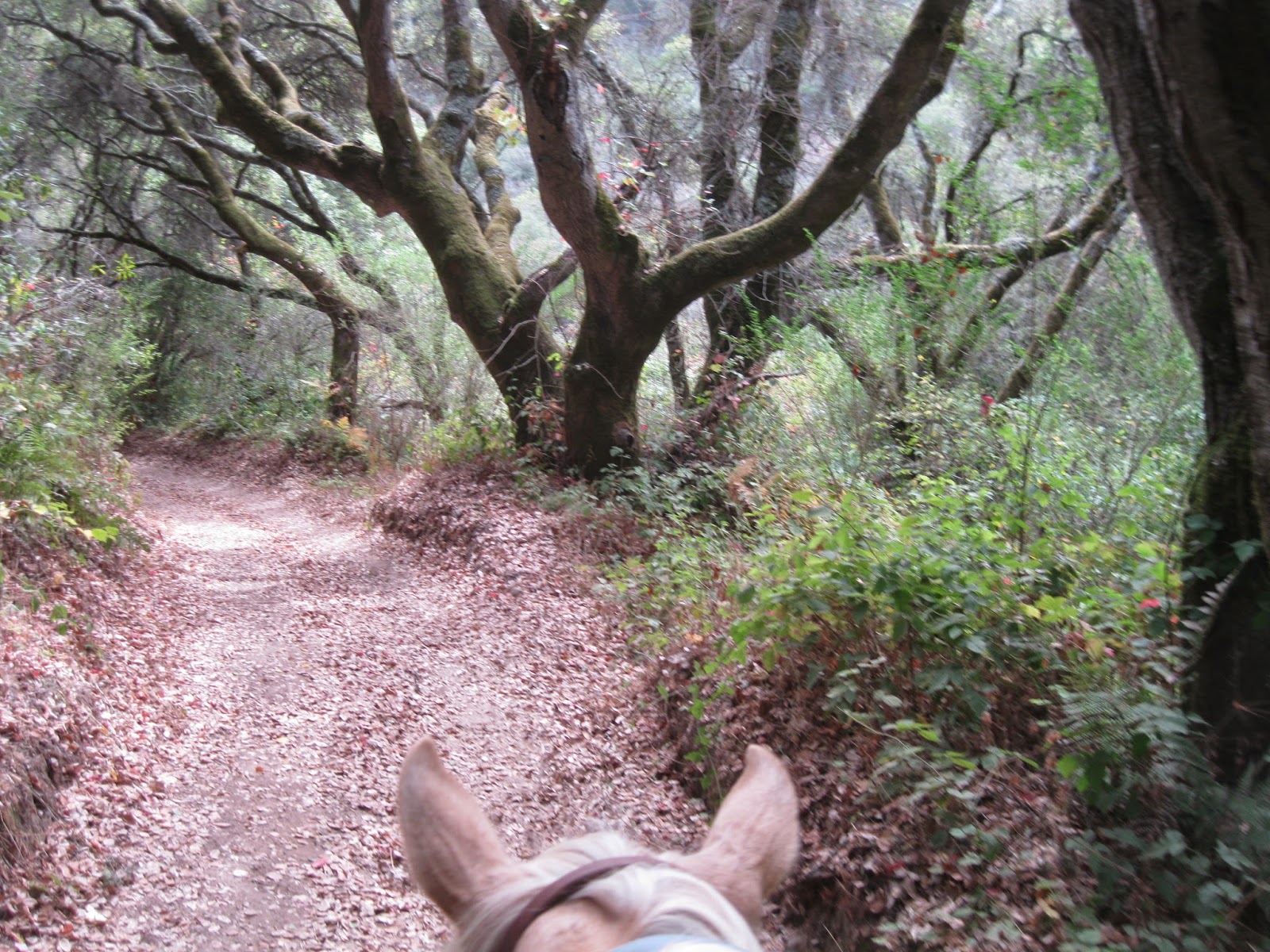 PS—And here is a pretty photo of my last trail ride on Sunny. Sunny is a product of the sort of breaking and training I am talking about here, and I think those who own such reliable horses will understand the pleasure I take in going for a two hour ride in which my horse does nothing but behave calmly and obediently and enjoy the ride with me. No spooking, no jigging, no balking, no resistance or overly “up” energy. Yes, broke horses are worth their weight in gold (especially for those of us who are old enough that we dread coming off).

Again, a very different approach to the 'setting the head' that was/is practised over here. I have to say it seems more sensible, because you and the other breakers were on hand to release at the right time. I've seen many horses left in stables for hours with their head tied down and no reward or release when they yield to the pressure. What do they learn?

Martine--I've seen that, too. It is not something that I agree with or would ever do. It is commonly done in show barns (in my experience).

I'm finding this series extremely fascinating. I've never been exposed to this kind of breaking, but the way you explain it, it totally makes sense. Also people will pay a lot of money for a ranch-broke horse because they are known to be easy to ride and generally very dependable, so clearly something is going right there!

This is exactly how I watched colts being "broke" in the western barn where I rode as a kid. I thought it was quite terrible, but boy, those horses were broke-broke-broke when they were done. Some of them maybe a little too broke? What I mean is, as babies, it seemed to sap all the life out of them. They were obedient, yes, but dull and lifeless. My beloved Paint gelding went through a program like this - it took many years before he relaxed and had some personality again.

Now, as an adult ammy, I am ALL FOR a broke horse - exactly the type of broke you are talking about. But mine are also thinkers, jokers, with personality. So maybe you can talk a little about how you create a broke horse without creating an automaton? I am very curious about this balance!

I was taught to have a young horse yield his head like that in hand, and then to perform it under saddle. The horse would be rewarded with release of pressure and a pat/verbal praise after he had given his head. It does make emergency brakes that are really reliable!! Thank you for the outline of how to do this on the ground in a slightly different manner. I am enjoying reading your perspective on getting a young horse started.

Breanna--Yes, ranch horses and rope horses are known for being reliable, by people of virtually all disciplines, and this sort of breaking/training process is (in general) the way they get this way.

jenj--That's an interesting question. It's my guess that the western barn where you rode as a kid might have been turning out western show horses rather than ranch horses, and it's my understanding that Cash was trained as a reining horse. There is a BIG difference between the kind of training these horses get and what a ranch horse gets. The main difference is that western show horses are pushed much harder. Most of them are slated to compete in a very competitive event (for cowhorses it is the Snaffle Bit Futurity) as three year olds. These trainers use much the same methods as I write about, yes, but done to an extreme. Such that they are abusive. And yes, this does sap the life out of a horse for sure. The answer to your question is that we rode three year olds for ninety days, turned them out for six months (and I mean in a big pasture), rode them as four year olds for six months and turned them out for another six months. They weren't expected to behave like broke horses until somewhere between five and eight years old. My horses are all playful, with lots of personality, and I honestly think that it s simply pushing too hard for a horse to get "competitive" very young (like three) that creates the problem you talk about--whatever methods are used.

Thanks, Muppet. Glad you are enjoying this series of posts.

Referring to one of your comments above, I really like that the young horses are turned out to pasture for periods of time in their training. The timeline sounds very healthy even if the tying aspect involves stress.

Val--yes, the turning out is meant to balance the stress of training and let the young horse grow up in a healthy frame of mind. And I hate to say this, but training NEEDS to involve some stress. Or else you have not prepared the horse to remain obedient when he feels stressed. Unless you want to be the person I referenced in my post, who simply survives a good many near wrecks on her young horse until the horse finally gets reliable, you need to incorporate some training that teaches a young horse to remain obedient when he feels scared, or fresh, or rebellious or stressed in any way. And that training is not going to be stress-free.

I'm really enjoying this series, and hearing your insight on training! I think its always good to know the different methods. I do have a question: what is "bitting up?" I learned that to stop a spooking horse ready to run is to pull the horse's head to the right (or left) as far as you can to make the horse run in a tight circle, so they can't run forward. Once they realize they can't go anywhere, the horse will calm down (or that's the rationale, I guess). Is that a poor way to control the horse?

Michelle--I'll write more about "bitting up" in another post. But bitting up and checking up are the various ways in which a horse is confined by the reins and bridle and made to yield his head. There are MANY methods and devices. Some are far more harsh than others. All bitting up can be cruel and abusive if the horse must endure it too long and is not given appropriate release when he has shown that he gets the point and is yielding. Those who say bitting up is always cruel just don't understand the point of it and how to do it correctly.

The thing you're talking about when you say to pull the horses head around so he goes in a tight circle is what I called "doubling" a colt in the post. It's pretty much the only way to control a colt that wants to run off with you or buck you off in an early ride. I personally would not double a horse for spooking--only for trying to bolt. I'll write more about how we dealt with spooking in a later post.

Many people refer to this method as a one rein stop. It can be handy in an emergency, but you should never need it on a broke horse. And this, again, is part of the point of what I'm writing about here. A well-trained horse will not require this sort of "brake" once he is past the green horse stage. Also, again--we just ride a spook, in the discipline I come from. Even with a colt. The doubling was only used is the colt tried to run off.