Summer has been a Blur!

First of all let me apologize profusely for my long absence from the blob this summer. I have tried to catch up with everyone, and welcome, welcome, to our new bloggers, but this summer has gone by in a blur of tons of horse shows, countless teenagers and other students, more Pony Club preps and tests than I can count and a barn full of horses to train and keep show ready.

I am not complaining mind you, if someone had told me at the beginning of the year that in this economy, 2010 would be the busiest year yet for my boarding and training business I would asked them what they were drinking. It has been that crazy, with at one time 18 horses on the property and, although I feel VERY fortunate, I am also exhausted and on the verge of burn out. On top of it all I have been trying to stay dedicated to finishing my book which always seems to take a back seat to the more readily available training income. I have never been very good at juggling and at 51 I don’t seem to be getting any better. Any suggestions on how to deal with burn out? I have been finding myself dreaming on vacations websites of Hawaii and other remote places fantasizing about a getaway that I have no idea when I will have room in my schedule for.

Update on my 4-legged family.

Hank, who I blogged about several months ago, is recovering slowing from his leg injury. He was originally diagnosed with a suspensory strain but it was later decided that the ligament strain was secondary to a fracture in his side bone. Some of you may recall that Hank was a rescue that was purchased at auction from Mexican Charros. He came to me 4 years ago with numerous scares and scabs from old and present injuries not to mention many demons haunting his brain. 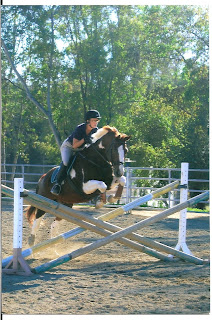 One of the old injuries was a prominent side bone on his front left pastern. Don’t let your vet tell you that sidebone is more of a blemish than lameness. That has not been the case with Hank. After sending all of his scans and radiographs off to a specialists, it was determined that he had fractured a wing of his sidebone which must have been bothering my stoic little boy for a while which in turn caused the strain in the suspensory.

I think both Hank and I are frustrated with the slow recovery process. Me because I miss riding him and Hank because he does not understand why he only gets handwalked each day and why he is now living on a strict diet since he has gained weight with the reduced activity. Anyone dealt with a similar injury? Any words of wisdom on treatment options I may not have heard of? My only real concern right now it that Hank has become very spooky and unsure of himself again. My guess is because he is not being ridden and stimulated and does not understand why??

Peter, my 21 year old dressage schoolmaster, has had a wonderful 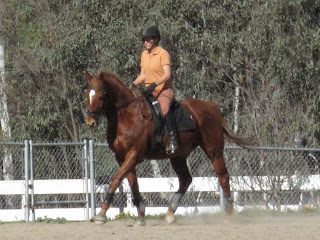 summer teaching my students the correct way to ride him, what soft, elastic contact means, how to perform 2nd, 3rd and 4th level movements. He has also given a few pony clubbers a run for their money at times. Whenever Pete feels he is not being ridden correctly (especially if someone hangs on him) he has been known to voice his opinion by leaving the ground in various, less that productive ways or simply try to trot people off his back. Sometimes Pete forgets the second digit in his age and thinks he is 2 not 21.

(Tahoe is the brown/white paint.) 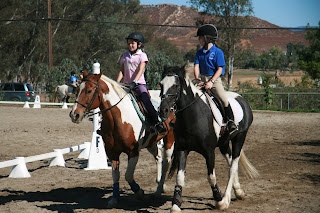 Tahoe or Tahoe the Wonder Pony as he is known in Pony Club, spent much of the summer lame due an abscess. This really scared me because he is 27 years old and you just never know with horses that age. But he has now bounced back with a vengeance and is gleefully teaching a new little girl that canter is not always scary and that jumping (little jumps of course) can be fun.
Winding down from summer.

Now that most of my students are back in school and we only have 2 more months of our show season, I am hoping to find more time to just be. Shorter days for me mean less work outside and more time to write, which I really look forward to. Have you all had an equally busy summer and feel that the world has been stuck on fast forward. Do Share!!
Posted by Terri Rocovich at 6:22 PM

Suspensory injuries can take a long time to heal - the best medicine is patience. The only time I've had problems with rehab is when I've rushed things.

Does sound like an overwhelmingly busy summer - one of the things I do to cope with burn out is to firmly schedule time for me - for something I want to do.

My guy was on stall rest for what seemed like an eternity (it was several months) after getting hung up on (literally) a fence on a cold Feb day in WI. It was about 3 months of short handwalks, daily hosings, and LOTS of boredom. I took down the boards from the top half of his stall and installed bars so he could see his neighbor. I also got him a goat. I know, I know...sounds dumb. But, the goat lived right in the stall with him and kept him company. They even played their own game of halter tag. I believe it saved his sanity. It's a thought!

Terri--Great to hear from you. And what a busy summer you've had. I can relate to burnout, but since I did take two vacations this summer, the bigger problem, for me, has been getting my horse program rolling again after time off--I always feel a bit disconnected from the horses when I've been away from them. Like Kate, when I need a break, I plan something that I want to do. Sometimes horse related (like a trail ride), sometimes not. But then again, horses aren't my living--just my hobby.

As for Hank, I've known suspensory tears that took a very long time to heal--like a year. Fortunately I've not had one of these on my own horses. I did have three months of rehabbing my son's horse from colic surgery--confined to a stall with hand walking only--so I can relate. Hand grazing helped Henry a lot--he enjoyed that. After the first month I was also allowed to lead my nine-year-old son on him at the walk (bareback), and that helped me, Henry and my son find the walking more entertaining and productive--more like work. My directions were to handwalk/graze Henry three times a day--it took a lot of my time, but it also helped a lot with Henry's boredom (he wasn't used to living in a stall--nor was I used to maintaining one in the immaculate condition needed for his successful recovery). Henry's stall was made of pipe panels so he could see the horses near him, though because of worries that he'd argue over the fence, there was a gap between him and his neighbors. I don't know if any of these things would be possible/practical for you with Hank, but thought I'd mention them just in case.